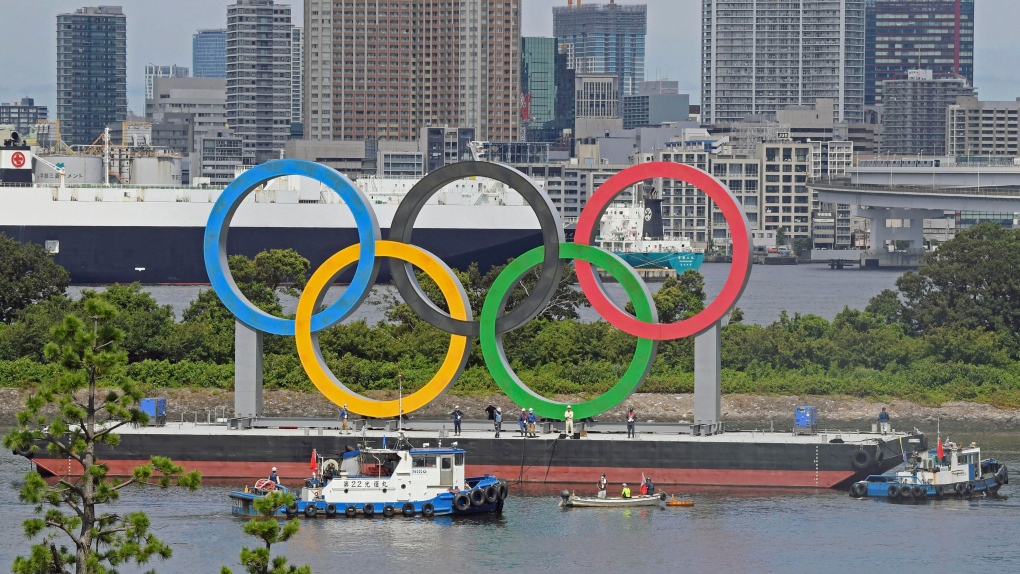 Workers prepare to remove the Olympic rings floating in the water after the 2020 Summer Olympics ended on Aug. 8, in Tokyo, Wednesday, Aug. 11, 2021. (Kyodo News via AP)
TOKYO -

The northern Japanese city of Sapporo is set to announce what it says will be a reduction in costs that will make it an attractive venue for the 2030 Winter Olympics.

City officials were expect to announce details on Monday.

The announcement comes almost four months after the delayed Tokyo Olympics closed with officials costs estimated at US$15.4 billion. Some estimates suggest the costs might have been twice that much, and all but about US$6 billion was public money.

Organizers have not yet announced final budget figures for the Tokyo Games.

Sapporo, which held the 1972 Winter Olympics, is considered a leading candidate. It helped solidify its case by stepping in and serving as the venue for race walks and marathons for the Tokyo Olympics.

Other areas that have expressed interest include a Spanish bid from the Aragon and Catalonia regions, a possible bid from Ukraine, 2010 host city Vancouver, and some interest for 2030 or 2034 from Salt Lake City, which held the 2002 Winter Olympics.

Japan's Kyodo news agency reported earlier this month that Sapporo was likely to announce costs of between 280 billion to 300 billion yen. This is US$2.55 billion to US$2.65 billion at the current exchange rate.

Kyodo said this was a 20 per cent reduction over estimates made in 2019. Citing unnamed sources, Kyodo said the cost saving would be made by using existing facilities. Despite the promises, Olympic Games consistently run over budget.

Kyodo said some events would be held in Obihiro, located east of Sapporo, and in Nagano, the host city for the 1998 Winter Games.

The IOC no longer goes through a long bid process. Host cities are now picked by the IOC leadership, and decisions have been taken out of the hands of rank-and-file IOC members.

The voting by IOC members for the 2016 Olympics and 2020 Tokyo Games has been soiled by bribery allegations. Former IOC member Carlos Nuzman of Brazil was sentenced a few days ago to 30 years in prison for, among other things, bribing IOC members in the 2009 vote for 2016.

He is appealing the conviction.

Tsunekazu Takeda resigned in 2019 as an IOC member and head of the Japanese Olympic Committee when he became embroiled in bribery allegations over bidding for the 2020 Olympics. He denied any wrongdoing.

In a statement to The Associated Press, the IOC said "there is no fixed timeframe for electing a host for 2030, or any other edition of the Olympic Games. The Future Host Commissions, which oversee and monitor interest in future Games, are guided by strategic opportunities for the Olympic Movement and the global context."