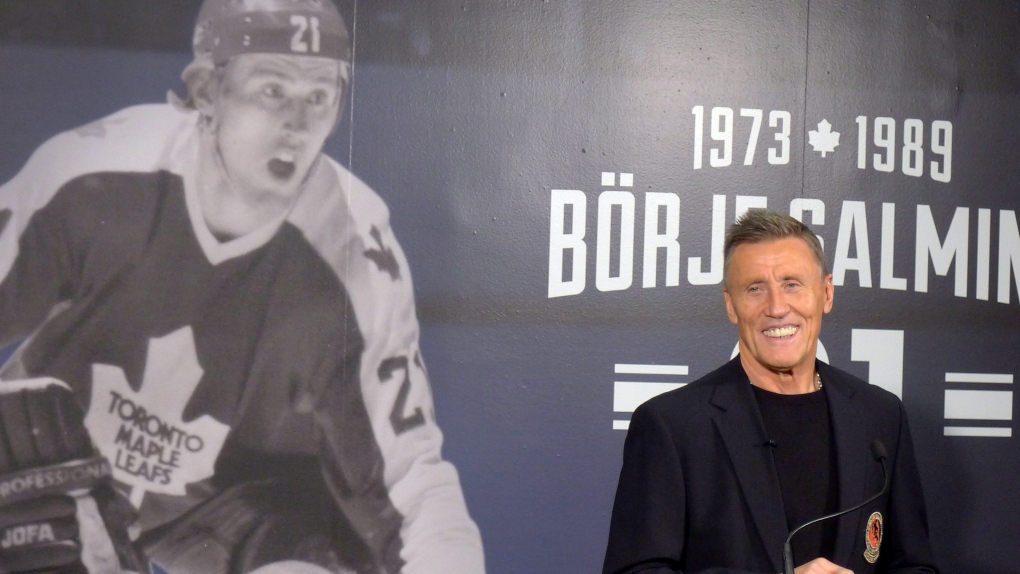 TORONTO -- At 63, Borje Salming looks like he could still play on the Leafs' blue-line. He can certainly still tell a story.

The legendary former Toronto defenceman drew laughs during a news conference between periods Friday night when he was asked about the first time he encountered fellow Swede Peter Forsberg, who will join Salming in the Hockey Hall of Fame on Monday.

Salming, who is 22 years older than Forsberg, recalled a game late in his career when he played for AIK against Forsberg and Modo in the Swedish Elite League.

"He was going crazy on the ice, screaming at refs and everything," Salming recalled. "And I sort of tried to calm him down and said 'Relax, you're going to get a match penalty."'

"And I thought 'That was me a few years back," Salming said, adding an F-bomb of his own between laughs. "That was nice. I don't think he remembered that though,"

The blue language made it through the entire building as the press room availability was shown on the Air Canada Centre scoreboard.

Salming was a guest of honour at Friday's Leafs game against the Pittsburgh Penguins, drawing a warm reception when introduced. Earlier in the day it had been announced that the stylish Swede will be the fourth member of the team's Legends Row.

The Hall of Famer's statue will be unveiled outside Air Canada Centre next September along with statues of Darryl Sittler, Ted Kennedy and goaltender Johnny Bower.

The Legends statues will be set up in bronze on a granite bench in Maple Leaf Square.

Salming joined Toronto in 1973 and earned NHL second all-star team honours in his sophomore season. In 1,019 games with the Leafs, Salming had 137 goals and 738 points.

"Playing in the 70's was fantastic, we had such a good team," he said of the Leafs. "I played with Lanny (McDonald) and Darryl (Sittler) and Tiger (Williams). It was great times. But in the '80s too, of course."

Salming, as one of the Swedish trailblazers in the league, took his lumps in the NHL.

"That was part of the game. We knew that when I was coming over, me and Inge Hammarstrom," he said. "We knew it was going. But I don't think we knew it was going to be that rough, like it was in the beginning of the '70s."

"That wasn't the way we played in Europe. But you had to adjust," he added.

Salming played his final season in the NHL with Detroit and spent three more seasons with AIK before retiring in 1993. He was inducted into the Hall of Fame in '96.

"Borje paved the way for all the Swedish players in the National Hockey League." said former Leafs captain Mats Sundin, another Hall of Famer.

Asked if he could play today, Salming laughed. "These guys today are bigger and in better shape. I think that's the difference."

Dressed in his Hall of Fame blazer and black jeans, the chiselled Salming looked like a cross between Christopher Walken and Dolph Lundgren.

"You look the same," said one reporter, referring to Salming's playing days.

"I do? Oh, thanks so much," Salming said with a laugh.