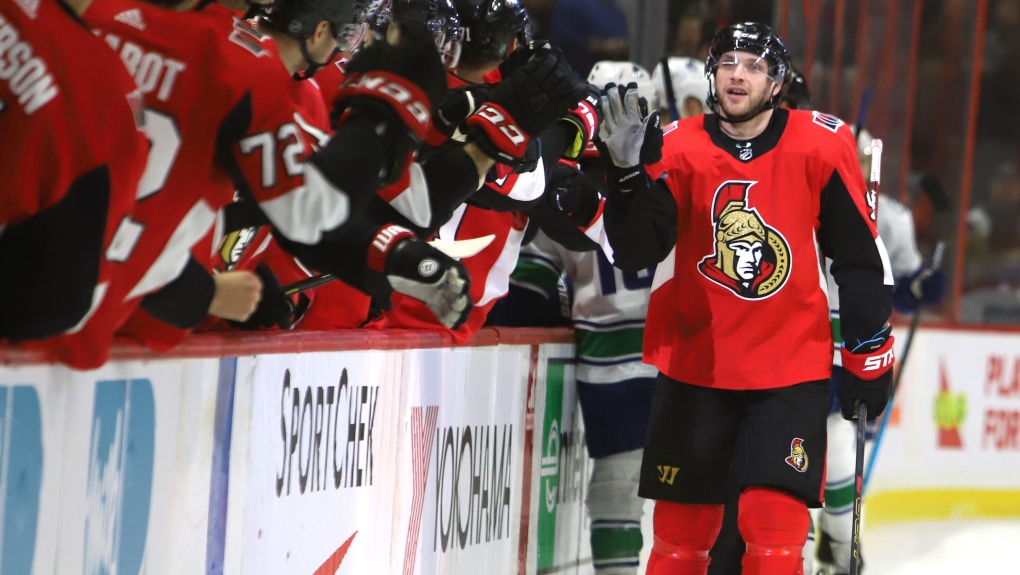 OTTAWA -- Bobby Ryan had a hat trick in his first home game in more than three months to lead the Ottawa Senators to a 5-2 win over the Vancouver Canucks on Thursday.

Ryan entered the joint NHL/NHLPA assistance program on Nov. 20 after admitting to having a problem with alcohol.

He had been skating on his own since late December and was held scoreless in his return to the Senators lineup in Nashville on Tuesday.

Fans at Canadian Tire Centre were quick to cheer Ryan on Thursday, giving him a standing ovation and chanting his name.

Vancouver missed out on an opportunity to gain ground in the Pacific Division as they played game two of a four-game road trip (1-1-0).

Leading 2-1 to open the third, the Senators regained their two-goal lead just 14 seconds in as Ottawa won the opening faceoff to take control offensively.

Balcers scored when he picked up a Chris Tierney rebound. Brown hit the 40-point mark (14 goals and 26 assists) for the first time in his career with an assist on the play.

The Canucks made it a one-goal game again as Toffoli tipped Miller's point shot midway through the period, but Ryan scored his second of the night with just over two minutes remaining and then added an empty-net goal to complete the hat trick.

Hogberg was solid through the second period, but the Canucks finally found a way to beat him with 15 seconds remaining in the period to make it 2-1.

The Senators netminder had robbed Vancouver numerous times through the period, including a point blank save on Jay Beagle, but was unable to stop Miller's point shot.

For the second straight game the Canucks gave up the first two goals as the Senators scored twice in a span of 31 seconds.

Brown opened the scoring as he took the puck at centre and came down and beat Demko with a wrist shot. Seconds later Ryan made it 2-0 with his first since the opening game of the season.