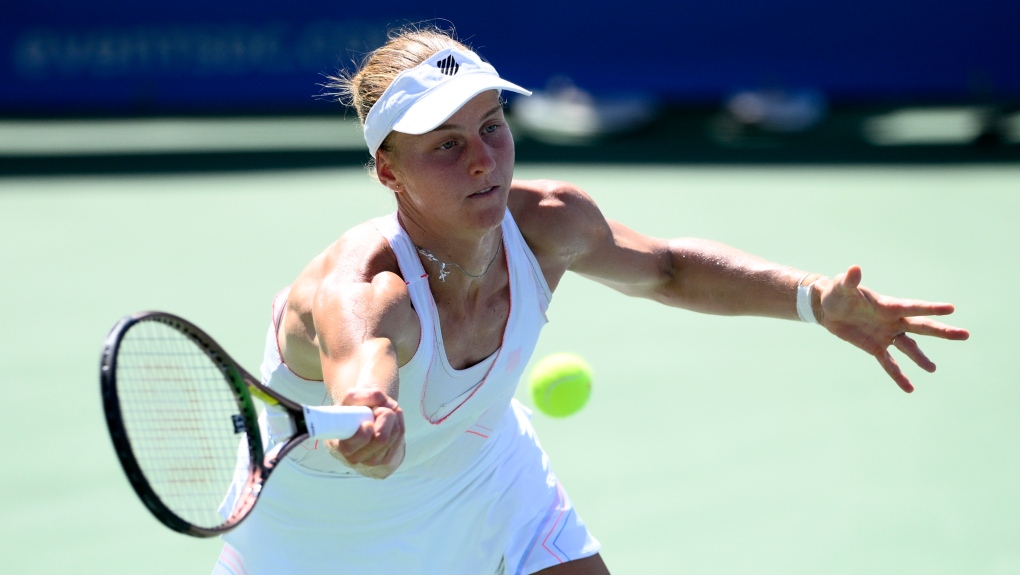 Liudmila Samsonova, of Russia, lunges for the ball during a final against Kaia Kanepi, of Estonia, at the Citi Open tennis tournament Sunday, Aug. 7, 2022, in Washington. (AP Photo/Nick Wass)

It was quite a week for Russia's professional tennis players – four tournaments, three titles.

One of them, Liudmila Samsonova, thinks it might not be merely a coincidence that this recent run of success for her, Daria Kasatkina and Daniil Medvedev comes shortly after they were banned from competing at Wimbledon because of their country's invasion of, and ongoing war in, Ukraine.

"We are all very angry about the situation," Samsonova said after beating Estonia's Kaia Kanepi 4-6, 6-3, 6-3 in the final of the Citi Open on Sunday for her second career WTA title. "I mean, it was a really tough month."

Samsonova earned her trophy in Washington a day after Medvedev, who leads the men's rankings, defeated Britain's Cam Norrie for the championship at Los Cabos, Mexico, and several hours before Kasatkina won the title at San Jose, California, with a victory over American Shelby Rogers. All three events are hard-court tune-ups ahead of the year's last Grand Slam tournament, the U.S. Open, which begins in New York on Aug. 29; Medvedev is the defending champion there. (The week's fourth title, the men's event at the Citi Open, was won by Australia's Nick Kyrgios; a Russian, Andrey Rublev, reached the semifinals).

At the previous Grand Slam event, Wimbledon, which ran from late June into July, all athletes from Russia and Belarus were blocked by the All England Club from participating because of the attack on Ukraine. That prompted the WTA and ATP professional tours to withhold rankings points from the tournament, meaning whatever was earned there in 2021 fell off a player's record and could not be replaced with how they fared there this year.

"It's been a great week for us. I wouldn't say that Wimbledon (gave) a lot of motivation to us, because we want to win these tournaments and matches in any case. I think it just happened that, in this particular week, three Russian players won titles. It's not happening very often, let's say," said Kasatkina, who has called for an end to the fighting in Ukraine. "I think it's just a coincidence. It shows that we're on a good level."

When Samsonova arrived in Washington a week ago, her ranking had dropped from a career-best of 25th in May to 60th. And she had not played a match on tour since June.

She used that time to go to her training base in Italy and work on her game – and herself.

She started collaborating with a mental coach ( "I can't thank her enough," Samsonova said Sunday). She sought to improve her topspin forehand, her serve and her return, all of which paid off during a victory over reigning U.S. Open champion Emma Raducanu in the quarterfinals and against Kanepi in the final.

Asked Sunday about Wimbledon and the results she and other Russians produced this week, Samsonova said: "We (had) a lot of time to work, so I think we (used) it very well."

Up until a couple of weeks ago, she was not sure whether she would be able to play in Washington at all. That's because her visa was due to expire in July and she was told there might not be enough time to complete the application process for a renewal.

That might have meant missing not just the Citi Open, but also other tournaments in the country, including perhaps the U.S. Open. (Unlike the All England Club, the U.S. Tennis Association announced it would permit athletes from Russia and Belarus to enter the draws).

Fortunately, Samsonova said, it did work out, otherwise she might have gone back to Europe to play in some lower-level events.

"I really don't know" what would have happened, she acknowledged.

The paperwork came through, Samsonova made it to Washington, and on Sunday night, she was pondering something Medvedev and Kasatkina might have been, too: What's the proper way to celebrate?