Royal silks back in British horse racing after Queen's death

Royal silks back in British horse racing after Queen's death 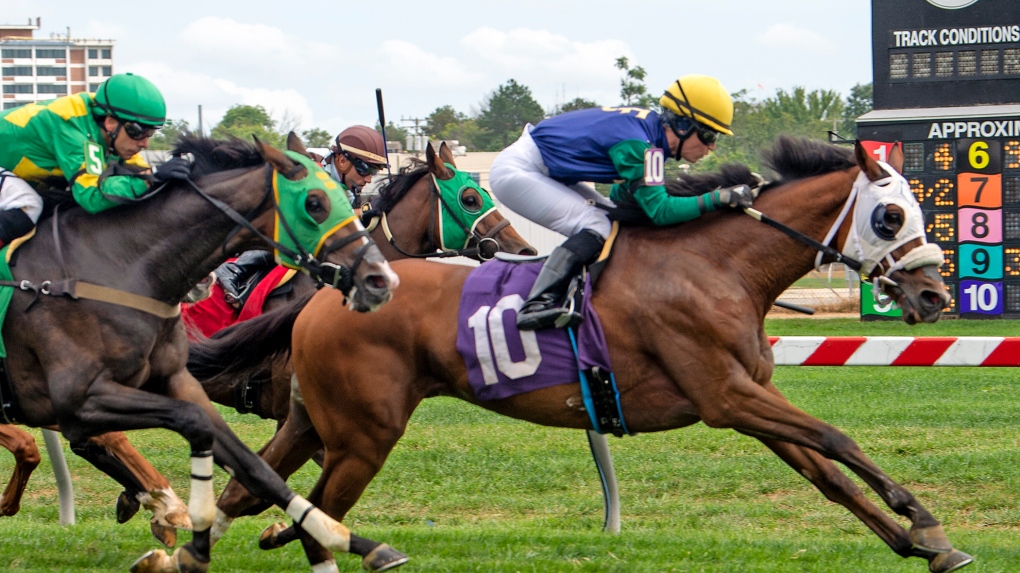 West Newton, a 6-year-old gelding, with jockey Forest Boyce, rallies from sixth place to win by a half-length at Pimlico on Saturday, Sept. 10, 2022 in Baltimore. (Jerry Dzierwinski/Pimlico via AP)
LONDON -

The famous royal silks are returning to British horse racing for the first time since the death of Queen Elizabeth II.

Taking to the track under the ownership of the Queen's heir, King Charles III, Educator will don the purple, red and gold silks for a race at Salisbury on Thursday.

Educator will be the first horse in those colours since Improvise was beaten narrowly at Epsom on Sept. 8 -- the same day the queen died at her Balmoral estate in Scotland.

Tom Marquand, who will ride Educator, said he will have mixed feelings.

"Having ridden for the queen, they will remain some of the proudest moments of my career for the entirety of it," Marquand said. "Riding the first runner (for the king) is a moment to cherish as well.

"It will be a sad day and a happy day at the same time."

Joe Saumarez Smith, chairman of the British Horseracing Authority, expressed his delight that the King has taken on the royal racing interests.

"Her late Majesty Queen Elizabeth II left an indelible mark on our sport," Smith said, "and her legacy will continue to be felt, not only through the horses that will continue to run in the name of King Charles III, but also those she bred who are yet to be seen on the racecourse in the years to come."

Buckingham Palace said horse racing was a lifelong passion of the queen and the king was "delighted to honour her legacy."