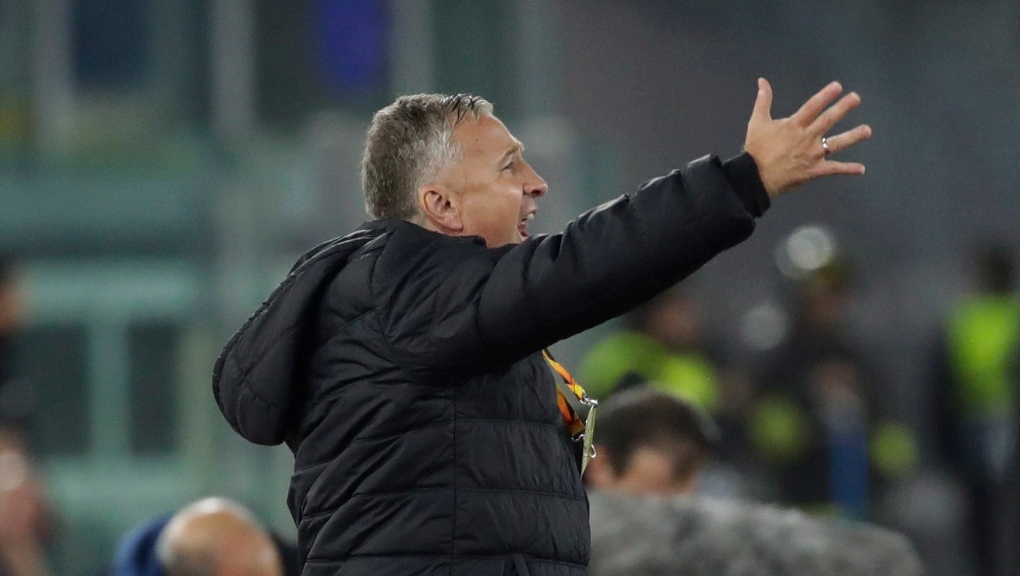 GENEVA -- In the Europe-wide race to finish this soccer season before the next one starts, Romania's league aims to beat a UEFA target for completion by resuming in two weeks.

On Thursday, public authorities were agreeing on protocols to keep players and officials safe for a June 13 restart in Liga 1.

"This is a positive. The economy is suffering and people are suffering," league vice-president Robert Pongracz said of the restart plans, while also noting: "This is the last possible date for us to start."

It's not how the soccer summer of 2020 was meant to be for Romania. Plans to host four European Championship games in Bucharest and play in the Tokyo Olympics men's tournament were postponed by one year due to the coronavirus pandemic.

Romania has little wiggle room to meet a July 20 target for lower-ranked countries to complete domestic seasons and quickly send teams into next season's UEFA competitions.

Amid so much uncertainty in soccer schedules, UEFA has yet to announce a program for its own club competitions next season. Those qualifying rounds seem sure to start before the current season's editions can resume in August at the round of 16 stage.

Romania's title winner is needed in the first Champions League qualifying round which could start in July. Three more Romanian teams enter the Europa League first qualifying round, including the winner of the domestic cup stalled at the semifinals stage.

Eight rounds are left in the post-season championship group which took the top six teams from the regular season table. It's led by two-time defending champion Cluj, coached by 1990s great Dan Petrescu.

"It's very hard for me to start a league without the most attractive teams because they are busy in the (UEFA) qualifying," Pongracz said.

The 14-team league typically kicks off in mid-July but the next opening day seems likely in mid-August.

The disruption -- to fixture programs, player contracts and transfer windows -- and shortest-ever off-season makes it tough for teams to plan squads and prepare tactics.

One upside for Romanian soccer is a five-year domestic broadcasting deal worth 30 million euros ($33.1 million) annually in the nation of 20 million people.

"We have a good TV deal," Pongracz said. "TV monies are very essential for our clubs."

The league also has Romania's greatest ever player, Gheorghe Hagi, coaching the young Viitorul team he created a decade ago. "Hagi's Kids" won a first title in 2017.

"It's very important from an iconic point of view and what these players mean to Romanian football," Pongracz said of Hagi and Petrescu.

Hagi's son, Ianis, helped Romania qualify for the Olympics by reaching the Under-21 European Championship semifinals last year. A dynamic team scored four times against each of Croatia and England.

Romania must also wait until at least October for the first stage of the Euro 2020 playoffs.

"We are realistic that it's a very difficult game against Iceland," Pongracz acknowledged. The winner in Reykjavik will face Bulgaria or Hungary for a place at Euro 2020.

First, Romanian soccer must emerge from its three-month shutdown with fans having a longer wait before they can attend.

"I hope we understand the value of the match itself," Pongracz said, "and (appreciate) what it means that we are able to play."