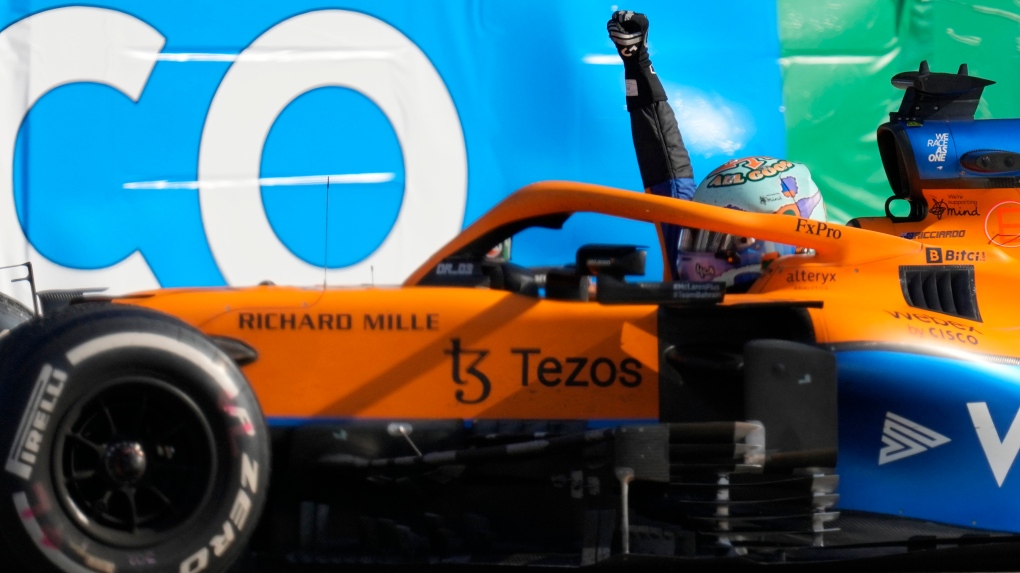 A simmering battle in Formula One erupted in spectacular fashion on Sunday as championship leader Max Verstappen and defending champion Lewis Hamilton crashed out of the Italian Grand Prix, which was won by McLaren's Daniel Ricciardo.

As both Hamilton and Verstappen fought for position midway through the race, their cars came together in a move that could have seriously injured Hamilton. Mercedes team principal Toto Wolff went as far as describing it as "a tactical foul" by Verstappen.

"The stewards will decide who is to blame," Wolff said. "In football you would call it a tactical foul. He knew that if Lewis stays ahead, then that is the race win."

The stewards did decide, judging that Verstappen "was predominantly to blame for the collision." They gave the Red Bull driver a three-place grid drop for the start of the next race, the Russian GP on Sept. 26.

"I'm proud of the stewards," Hamilton said after learning of their decision. "I need some time to really reflect on it but I think it definitely sets a precedent and I think it's important for us moving forwards, for the safety of the drivers that there are strict rules set in place."

Hamilton, who had been outspoken against the protective halo at the front of F1 car cockpits before its introduction in 2018, thinks it might have saved his life on Sunday.

"I don't think I've ever been hit on the head by a car before. It's quite a shock for me," added Hamilton, who still sounded distressed several hours after the incident. "And I've been racing a long, long time. So I'm so, so grateful that I'm still here. I feel incredibly blessed. I feel like someone was watching over me today."

Verstappen maintained his championship lead, which he had slightly extended to five points by coming second in the sprint on Saturday.

"We were racing for position today but you need two people to work together to make the corner and Lewis just kept squeezing until there wasn't room anymore for two cars and that's when we crashed," Verstappen said.

"I was there to try and race hard but fair. I don't fully agree with the penalty as I believe it was a racing incident. It's very unfortunate what happened today but we are both professionals and so we will move on."

It was the second major incident between the two in as many months. They clashed on the first lap of the British GP in what Red Bull called a "desperate" move by Mercedes driver Hamilton that saw him given a 10-second penalty and Verstappen hospitalized.

Ricciardo celebrated in his traditional style on the iconic Monza podium, drinking champagne from his shoe -- and then getting teammate Lando Norris to do so too.

It was McLaren's first win in nearly nine years, since Jenson Button took the checkered flag in Brazil in 2012, and Ricciardo's first win since Monaco in 2018. He finished 1.747 seconds ahead of Norris and 4.921 ahead of Mercedes driver Valtteri Bottas, who turned in a strong performance after starting from the back of the grid after a penalty for taking a new engine.

"About time. Oh wow," Ricciardo said. "Even if we got the start it wasn't guaranteed that we'd lead the whole race. We didn't have mega speed but it was enough to keep Max behind.

"To lead literally from start to finish I don't think any of us expected that. But there was something in me Friday, I knew something good was to come."

But the biggest talking point of the race came on Lap 26.

Hamilton had pitted from the lead and returned to the track just in front of Verstappen. Verstappen tried to come up the inside on a turn as the seven-time champion defended his position.

As the two made contact, Verstappen's car catapulted onto the top of the Mercedes as both slid into the gravel.

"That's what you get when you don't leave the space," said a furious Verstappen over team radio.

Both drivers were able to walk away from their cars though Hamilton took a long time getting out of his, only clambering out after Verstappen had long gone.

"I did see Max get out and just walk by," Hamilton said. "I felt that a little bit surprising because ultimately when we do have incidents the first thing we want to make sure is that the other guy that we crashed into is okay.

"But the good thing is I was able to get out. It was a long walk back but we live to fight another day."

Ricciardo enjoyed a brilliant start to the race, passing Verstappen, who started from pole position, at turn one.

Behind them Hamilton, who started fourth, managed to pass Norris. But he then attempted to try and get around the outside of Verstappen heading into the second chicane and was instead forced off across the grass, allowing Norris to regain his place.

"He (Verstappen) pushed me wide!" Hamilton exclaimed over team radio.

Hamilton was then held up by Norris and could only watch in frustration as Ricciardo and Verstappen stretched their advantage lap by lap.

Ricciardo was first to pit, on Lap 23, and came out seventh. Verstappen was struggling with his tires and stopped on the following lap.

But a botched pit stop that lasted 11.1 seconds saw him come out in 10th and, to make matters worse for the Dutch driver, Hamilton had in the meantime passed Norris to take the lead.

But disaster struck for both drivers shortly afterward.

Hamilton, who was on a harder tire that allowed him to stay out longer, eventually pitted from the lead but his stop was also an unusually long one and he rejoined the race behind Norris and just ahead of Verstappen setting up their unwanted coming together.

There was contrasting fortunes for Hamilton's teammate Bottas, who extended his strong weekend just days after it was revealed that he is to leave Mercedes at the end of the season.

Bottas had outqualified Hamilton on Friday and won Saturday's sprint with the Finnish driver showing new team Alfa Romeo just what it can expect next season with a strong drive through the field on Sunday.

He finished fourth on the track but was promoted to third after Red Bull's Sergio Perez was given a five-second penalty for leaving the track and gaining an advantage while overtaking Charles Leclerc earlier.