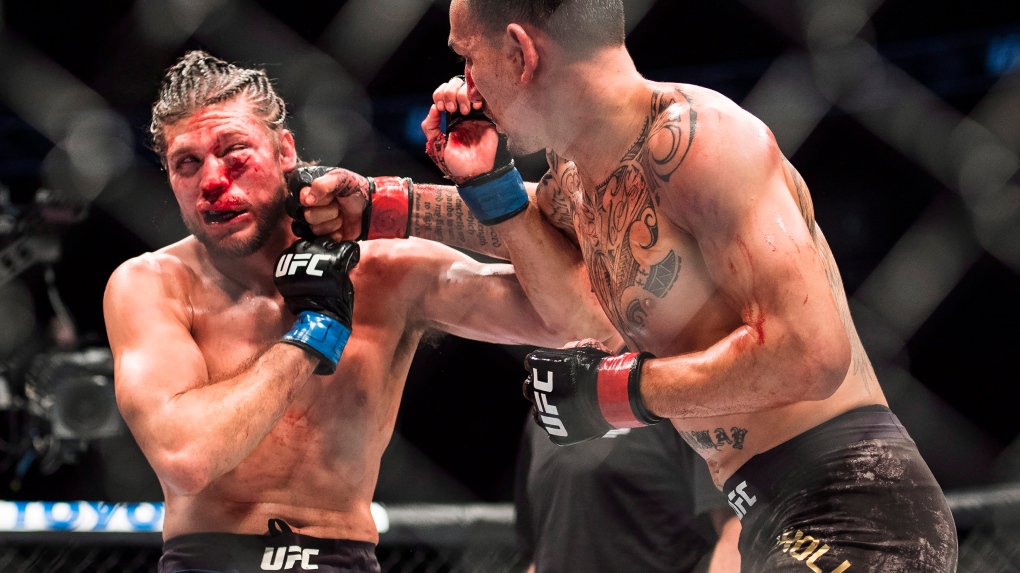 If Max Holloway had run against John Tory, he might have given the Toronto mayor a run for his money.

The UFC featherweight champion solidified himself as a fan favourite in Toronto after delivering on every level on Saturday night as he successfully defended his featherweight title in spectacular fashion. The Hawaiian fighter faced what many considered to be his toughest challenge to date in the undefeated Brian Ortega. While the match was amazing to watch, its finish was a foregone conclusion after just the first round as Holloway was just too much for Ortega to handle.

Holloway not only outclassed his opponent, but also broke several records. The 27-year-old landed 290 significant strikes in his fourth-round TKO victory. That number of successfully landed strikes is now a new UFC single-fight record. That’s not all.

Holloway connected on 134 of those strikes in the fourth round which also gave him the distinction of having the most strikes landed in a single UFC round.

The UFC main event also received ‘Fight of the Night’ honours meaning that both fighters received a $50,000 bonus each.

Mixed martial arts insiders predicted that the contest would be a good one and it proved to be worth the hype. There was no lull in the fight as both men went in for the kill, refusing the grapple or clench for the most part and each looking to land the one big bomb. It made for an exciting night as fans in attendance yelled the champion’s name in unison before the match, during the match, and even on the street after it was over.

As for the rest of the card:

The UFC 231 main card got started with a bang as the two light heavyweights gave the fans what they wanted in every way possible. Prior to the match, Santos had finished six out of his last seven fights with a knockout while Manuwa boasted an 88% knockout rate. The translation is that the card’s opening match was being promoted as a bout between two fighters who both ended matches quickly and it was as Santos knocked his opponent out in the second round.

The night seemed to belong to Thiago Santos from the start as he immediately dropped his opponent with a left hook to open the match.  As soon as Manuwa was able to get back to his feet, he was easily dropped again.

Manuwa tried to get some breathing room with a clench in the second, but the strategy didn’t seem to work as both men started throwing haymakers early and often. The fight almost ended in the first round after two spectacular kicks from Santos as he first attempted a spinning roundhouse kick and followed this up with a spinning switch. While neither landed, they put Manuwa on notice that he was in trouble with a fighter who seemed to be ready for anything.

In the second round, the inevitable came quickly.  It didn’t take long for Santos to land a couple of lethal left hooks, knocking Manuwa out.

“This is my division and I will be the champion,” Santos said after the match.

It was a little odd that this fight had made it onto the main card but perhaps that’s indicative of the great potential that UFC President Dana White sees for these two pugilists.

The fighters danced around each other in every round as both seemed to employ a measured and patient approach.

The fight went all three rounds before the Canadian was named the victor by split decision.

While welterweight Gunnar Nelson hasn’t been in an Octagon in more than a year, it looked like the Icelandic fighter hadn’t missed a beat. Using this fight as his own highlight reel, Nelson showed everything in his repertoire.

When he seemed to gain leverage on his opponent with a grapple, Oliveira grabbed onto the cage to try and break it leading to an early warning from the referee.

It was clear that the Brazilian was having a tough time defending against Nelson’s wrestling and takedown attempts in the first round and things only progressed from there.

When the fight moved to the second round, Oliveira went for a clench until Nelson was able to turn his opponent around and score a takedown. From there, the result was never really in doubt. Nelson cracked Oliveira’s forehead with a series of punishing elbows that led to a fountain of blood pouring out of his adversary’s head. Clearly woozy, Oliveira was helpless as Nelson then took his back and submitted him with a very impressive rear naked chokehold.

One of the key points of analysis prior to the UFC 231 co-main event was the fact that Valentina Shevchenko had a size advantage. As the match progressed, the former bantamweight didn’t disappoint as she was able to use her frame to simply overpower her opponent.

The first round saw Shevchenko score a takedown and win almost every grapple with Jedrzejczyk.

The second and third rounds saw more of the same as the Kyrgyztani-Purvian fighter was able to land three additional takedowns, thwarting any defence Jedrzejczyk had. While the Polish fighter tried to turn things around in the fourth and fifth by trying to strike more, when the fight went to the judges, the decision was never in doubt.

At the post-fight press conference, the new champion admitted how important the win was.

“It is more better for me to win the bout in this type of fight than any other opponent,” she said.

If Max Holloway’s strategy was to enter the Octagon looking more relaxed than he ever has before, his mission was successful.

After toying with Brian Ortega in the first round, it was clear that the champion simply wanted to gauge how much distance he would have to strike. As soon as he was able to figure that out, Ortega became nothing more than a punching bag.

The second round saw Holloway establish his jab that he seemed to be hitting at will. It was shocking to see Ortega’s lack of defence but what was impressive was how he was able to absorb all of Holloway’s strikes without submitting.

Just as Ortega began to take control in the third round, effectively taking Holloway down, the Hawaiian fighter managed to stand up again. While the pair continued to trade strikes, the champion’s punches were the only ones causing serious damage.

The fourth (and what would inevitably become the final round) was one of the best that the UFC has ever produced. With both men going for the win, Max just seemed to have an answer to everything Ortega could do.  When Ortega would land the odd jab, Holloway would counter it with devastating three and four punch combinations.

The result was a beaten, battered and bloody Ortega who looked like he just was waiting to be saved by the bell and he was.

At the end of the round, the ringside physician determined that Ortega could not continue as one of his eyes was completely swollen shut.

Fight of the Night: Holloway vs. Ortega