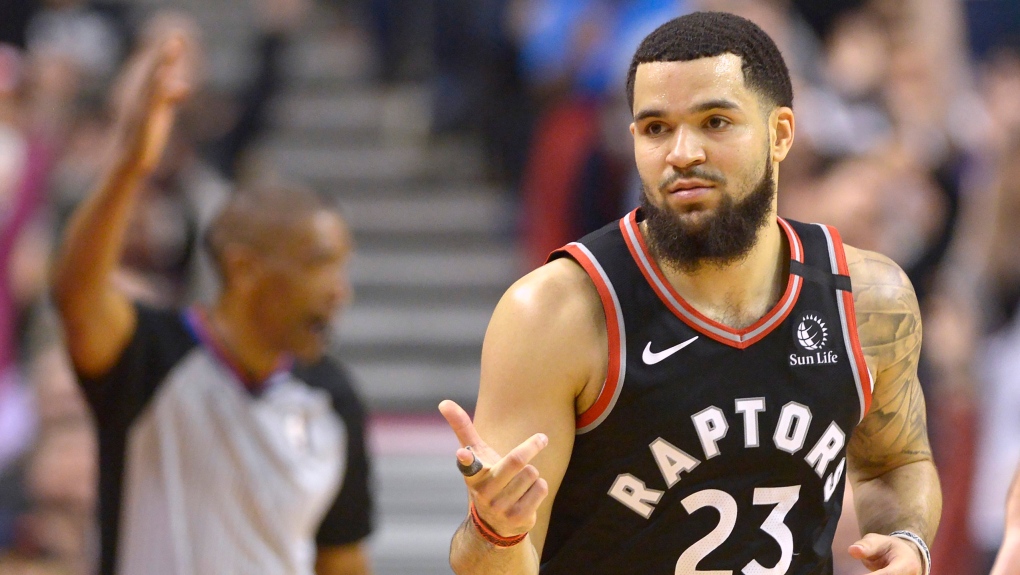 Toronto Raptors guard Fred VanVleet (23) reacts after hitting a three-pointer during second half NBA basketball action against the Philadelphia 76ers in Toronto on Wednesday, January 22, 2020. THE CANADIAN PRESS/Nathan Denette

TORONTO -- There was a moment during his keynote speech Tuesday night that Masai Ujiri briefly looked at his phone.

With the NBA trade deadline looming Feb. 6, rumours are rampant on social media, but the Toronto Raptors president warned not to read too much into phone calls.

Then again, Ujiri certainly isn't shy about making big deals. He shook the earth under his team when he shipped DeMar DeRozan to San Antonio for Kawhi Leonard in the 2018 off-season, then doubled down when he acquired Marc Gasol at last year's deadline for Jonas Valanciunas, Delon Wright and CJ Miles. History would make him look brilliant, as the Raptors captured their first NBA championship.

History, however, hasn't been kind to teams that have lost superstar players, and so most predictions pegged the Leonard-less Raptors as a run-of-the-mill squad this year. Expectations had Ujiri making some wholesale changes in a rebuilding effort.

But they're just a game behind Miami for second place in the East, and captured their fifth consecutive win on Wednesday when they beat Philadelphia 107-95. That's despite a rash of major injuries to key players Kyle Lowry, Pascal Siakam, Gasol, Serge Ibaka and Fred VanVleet.

Do they have another championship run in them?

"We're going to die trying, that's for sure. I know those guys and they're going to die trying. You see them, you see the attitude. I know nobody, not one person here in this place, would tell me that they thought we'd be competing now to be second in the East," Ujiri said after speaking to a crowd of about 300. "There's not one person that thought that with a championship player like Kawhi leaving. These guys have stepped up and we appreciate what they've done."

Ujiri bristled when asked whether his team had some valuable assets for the trading block.

"If we do something, it's out of the fact that we think this is giving us a chance, or a bigger chance, and right now I think we have that chance, if we continue to play ball and continue to figure it out. I'm proud of the guys, and I look at them as what we have. You never know what those days bring you, but I'm really proud of our guys."

While Leonard is gone, the confidence from winning remains. The Raptors have shown through their injury-riddled season that they know how to win -- and it extends beyond just the key players. In Wednesday's win, six players scored 16 or more points.

The Raptors (30-14) could make up some ground in the Eastern Conference in the next few weeks, as only three of their next 13 games are against teams with winning records. Toronto is in New York to face the Knicks (12-33) on Friday.