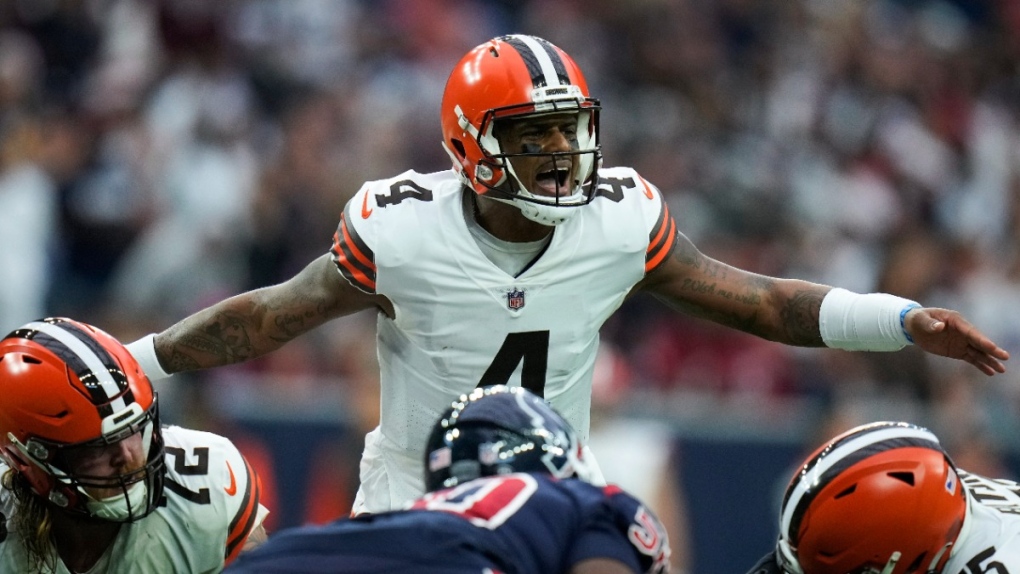 Cleveland Browns quarterback Deshaun Watson (4) calls a play at the line during the first half of an NFL football game in Houston, on Dec. 4, 2022. (Eric Christian Smith / AP)
HOUSTON -

His refusal to express remorse for alleged behaviour that led to an 11-game suspension is more difficult to explain.

Watson made it clear earlier in the week he had no interest in discussing accusations by more than two dozen women of sexual harassment and assault during massage sessions. He has settled 23 civil lawsuits brought by the women, while two others, including one filed in October, are pending.

After playing his first game in 700 days against his former team in the stadium where he became a three-time Pro Bowl quarterback, Watson still wasn't interested in talking about it.

"Like I said before, that's something that legal and clinical have answered before, and they don't want me to address anything like that," Watson said, sticking to his script.

He even attributed boos to being on the visiting team instead of his actions toward women that were labeled "egregious" and "predatory" by an independent arbiter who gave him a six-game ban that the NFL appealed and increased.

Watson had plenty of supporters among the small crowd. He signed autographs for fans wearing his old Texans jersey and his new Browns jersey. He took selfies with a few others. Even former teammate Laremy Tunsil got a signed jersey from Watson.

Watson's new teammates are also thrilled to have him on the field.

"Ever since Deshaun got in the building, he's been a tremendous leader," linebacker Tony Fields said.

Watson finished 12-of-22 passing for 131 yards and one interception, posting the worst passer rating of his NFL career at 53.4.

"We're not going to hold him to a crazy standard and expect him to be superman out there," Browns star defensive end Myles Garrett said. "He hasn't played in two years. We know the kind of football player he's been in the past and what he's like. We've seen him on the practice field doing things athletically and through the air that few players can match.

The 27-year-old Watson developed into one of the NFL's best QBs in his first four seasons in Houston. He led the league with 4,823 yards passing in 2020 and entered this season with a 104.5 career rating.

His talent is obvious. That's why the Browns and several teams pursued Watson after two grand juries in Texas declined to indict him over allegations of sexual harassment and assault. The Browns persuaded him to waive his no-trade clause with a fully guaranteed US$230 million contract, and then traded several draft picks to get him.

It may take a while for Watson to regain his old form, but there's little doubt he'll be a star player again.

It's uncertain whether he'll ever take accountability for his misconduct.

"I did everything that I was asked and was required to do," Watson said. "I did all that, and I was able to be able to play and be on the field today."

In his mind, it seems Watson has done enough.