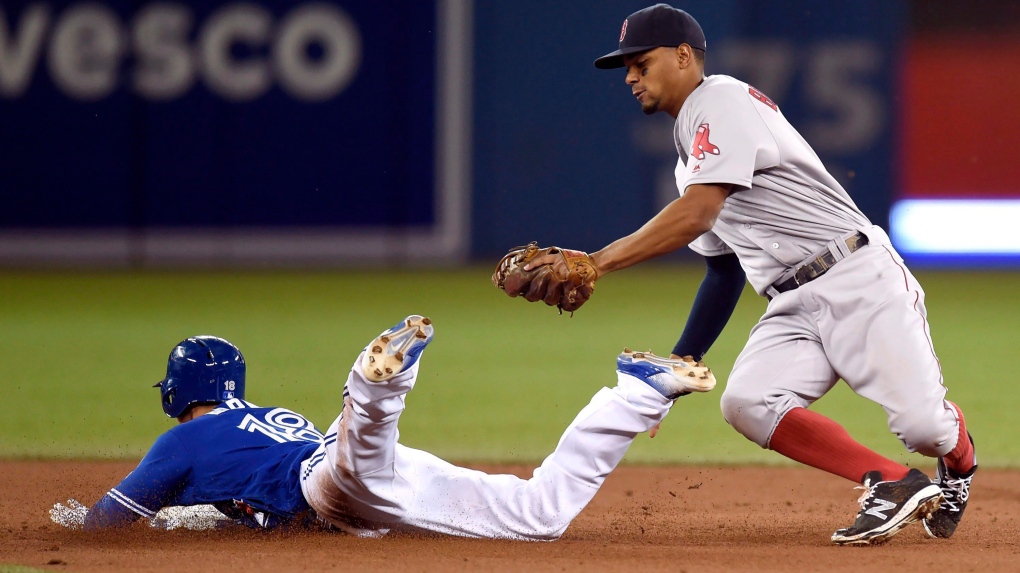 BOSTON -- David Price knew the results from his first two starts weren't up to the standard of what's expected from a high-priced ace.

He didn't disappointment himself or the Fenway Park crowd on his second chance.

"Absolutely, I hadn't thrown the ball the way that I know that I can the first two starts," Price said. "To throw the baseball the way I did today against the Blue Jays, which is an extremely good hitting team, feels good,"

He should know. He spent enough time with them last year.

Signed to a $217 million, seven-year deal during free agency, the left-hander had his best start for Boston. In his Fenway Park debut with the Red Sox on Monday, he gave up five runs in five innings after allowing two in six at Cleveland on opening day.

The 30-year-old went 9-1 for the Blue Jays last year after he was acquired in a trade from Detroit, helping them earn their first playoff appearance since 1993.

Price (2-0) gave up two runs and six hits, struck out nine and didn't allow a walk. He finished by striking out the side.

"It's almost like he gave you the feeling that there was a closer mentality in that final inning of work," Boston manager John Farrell said. "He finished the game today with a strong exclamation point to a solid outing for him."

So did Craig Kimbrel, who struck out the side in the ninth for his fourth save.

Marco Estrada (1-1) was charged with four runs and eight hits over six innings.

Estrada's outing began well until he was hit on the left leg by Jackie Bradley Jr.'s hard grounder leading off the third. After a pop out, four of the next five batters got hits and the Red Sox jumped ahead with four runs.

"I was feeling good today. I thought I was going to finish pretty strong. Just one inning got away from me," he said. "I got hit and my calf kind of tightened up on me, couldn't really finish pitches."

Bogaerts pushed Boston ahead 3-1 with his first homer, a line drive into the Green Monster seats. Travis Shaw added an RBI single.

Jose Bautista's RBI double gave the Blue Jays a 1-0 lead in the first after Josh Donaldson tripled into the centre-field triangle area. Edwin Encarnacion added a run-scoring double in the fourth.

Blue Jays: Estrada also stumbled off the mound and walked back slowly when he handled Bradley's grounder in the fourth.

"I tore my right quad a few years ago and it still gives me a little grief once in a while," he said. "I kind of hyperextended it, but that wasn't a big deal."

Dustin Pedroia went 1 for 3 with a single and walk. He's reached safely in 26 games against the Blue Jays, the longest active streak for any player against Toronto.

Actor Robert Redford was seated next to the Red Sox dugout.

Toronto's Chris Colabello was back in the lineup despite his early struggles. He entered 1 for 19 with six strikeouts. He went hitless in three at-bats with a strikeout.

Blue Jays: RHP Aaron Sanchez (0-0, 1.38 ERA) hopes for better run support on Sunday. He's received just two runs in each of his first two starts while holding opponents to two and one, respectively.

Red Sox: Knuckleballer Steven Wright (0-1, 1.35) is slated to go. He held the Blue Jays to two runs -- one earned -- in his first start of the season Sunday.