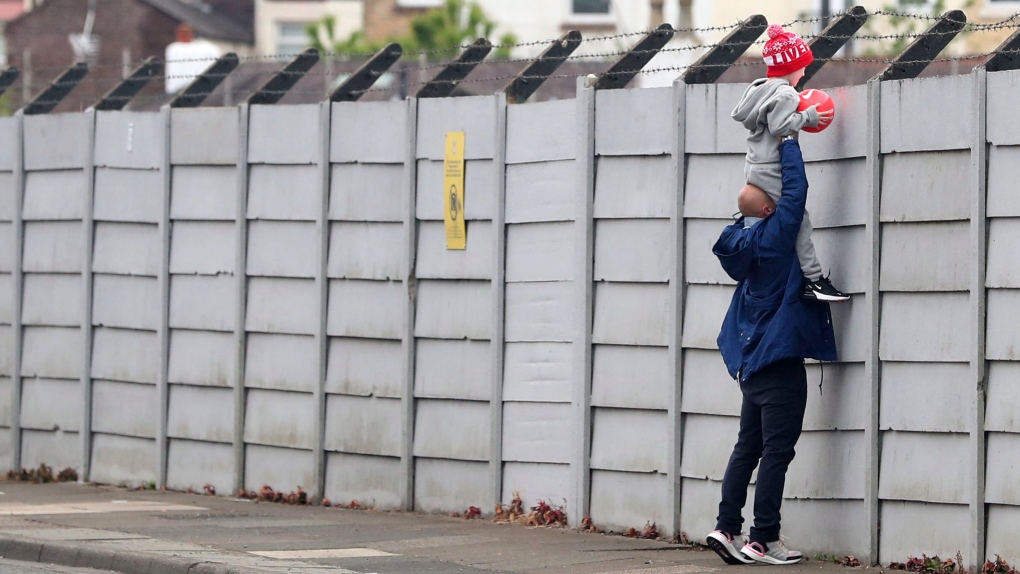 A man holds a child up over a fence to look into Liverpool's Melwood training ground after the English Premier League announced soccer players can return to training in small groups as the coronavirus lockdown was eased starting today Tuesday May 19, 2020. (Peter Byrne/PA via AP)

MANCHESTER, ENGLAND -- The Premier League plans to restart on June 17 after a 100-day shutdown caused by the coronavirus pandemic, with new staggered kickoff times to make sure every game can be shown on TV as fans are prevented from attending games.

The clubs agreed Thursday that the competition should resume with a Wednesday night doubleheader featuring Manchester City playing Arsenal and Aston Villa hosting Sheffield United -- two games that were postponed during earlier rounds.

However, the league still needs formal approval from the government.

"This date cannot be confirmed until we have met all the safety requirements needed," Premier League chief executive Richard Masters said, "as the health and welfare of all participants and supporters is our priority."

"Positive to see further steps on the return of football today," Culture Secretary Oliver Dowden tweeted. "We are still working on govt guidance before we green light sports' return."

It's still unclear where games will be played when the league resumes. Police have said only neutral venues should be used over concerns fans would congregate outside, but that plan was opposed by the 20 clubs.

The Premier League agreed to a government request for all remaining 92 fixtures to be aired live in Britain. Only 200 of the 380 games each season are normally broadcast live domestically while all are available to view internationally.

For the first time since the Premier League launched in 1992, games will be shown live by free-to-air broadcaster BBC, which has four of the remaining games.

"At a time when sports fans across the country are in need of lift, this is very welcome news," BBC director of sport Barbara Slater said.

Midweek rounds will now see an earlier set of games at 6 p.m. followed by 8 p.m. kickoffs.

Football has already resumed in Germany, with three rounds of the Bundesliga played in empty stadiums. The Spanish league has government approval to restart after June 8.

But lockdown measures have only just been eased to allow full practice sessions to resume at Premier League clubs.

Liverpool is on the verge of winning the Premier League, sitting 25 points in front with nine games remaining.