Poulin maintaining bench presence until she can play at world championship 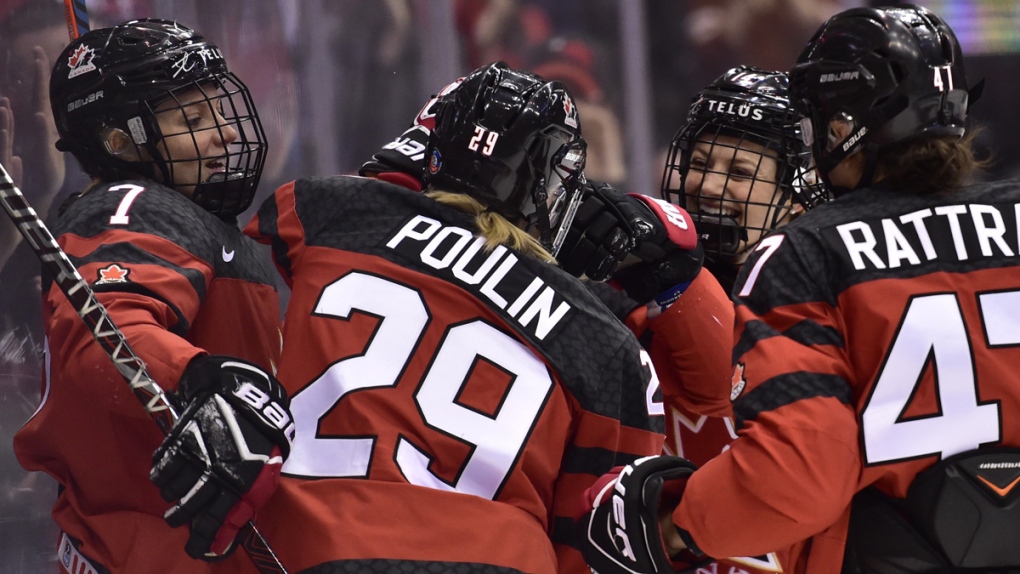 ESPOO, Finland -- Even if she can't play, Marie-Philip Poulin feels she's a better leader on the bench than in the stands.

While Canada's captain waits for her knee to get the all-clear for her to play in the women's world hockey championship, Poulin opts to be on the bench alongside her teammates dressed in her gear.

It's a role Poulin took on in the Clarkson Cup final for the Canadian Women's Hockey League's Les Canadiennes de Montreal and in Canada's 6-0 win over Switzerland to open the world championship.

"Being there on the bench knowing I can maybe have a presence as a leader, it's pretty important for me," Poulin said Friday at Metro Areena.

"When you're in the stands and you come down between periods, you don't know what's happening on the bench, but now you see it and feel it.

"It's obviously harder not playing, but it's another thing that I can learn. I've been embracing it and obviously it's not easy, but being there for my teammates is something that I value a lot."

Canada's captain since 2015, Poulin injured her knee in the CWHL's last game of the regular season Feb. 24.

She's skated in three practices since the Canadian team landed in Finland, and participated in Thursday's pre-game warmup for the Swiss game.

But Poulin's status remains day-to-day. She may again be a bench supporter Saturday when Canada faces archrival and defending champion United States in Group A play.

The 28-year-old from Beauceville, Que., grimaces a little at that prospect.

"We all know that rivalry is super-important, super-special," Poulin said. "Having the itch to jump in (Saturday) is going to be there for sure."

But head coach Perry Pearn isn't swaying from the plan to be patient with Poulin's knee.

"It's how she responds today and today there was more stress on her." Pearn said Friday. "We had her skating backwards and crossing over and we had her doing some of those things.

"We do need to see how the knee stands up to that and then make a decision from there."

"It wouldn't matter who we were playing tomorrow, Russia, Finland, U.S., you have to treat it exactly the same way."

Canada and the U.S. were even atop Group A with three points apiece heading into Saturday's meeting. Host Finland, a 6-2 loser to the Americans in their opener, Switzerland and Russia round out that group.

Japan topped Group B with three points ahead of Germany with two and Sweden with one. The Czech Republic and promoted France squared off Friday in their first games of the tournament.

All Group A teams and the top three in Group B will play in quarterfinals April 11. The semifinals are April 13 followed by the medal games April 14.

Not only is Poulin the highest-scoring player on Canada's world championship roster with 66 goals and 71 assists in 120 career games, she's also produced some of the biggest goals in Canadian hockey history.

Poulin scored the late equalizer and the overtime winner in the 2014 Olympic final, as well as both Canadian goals in the 2010 Winter Games final.

Roster limitations often make it impossible to have a player on the bench not playing. Each country can bring 23 players to the women's championship.

"In the NHL, you have a 20-man roster, you wouldn't be able to afford to dress somebody who isn't going to play," Pearn said. "In the international game, you have the freedom to dress more people.

"When we can have her on the bench, why not have her there? I give her a lot of credit from a leadership standpoint in terms of her wanting to be there and wanting to be part of it."

Her teammates appreciated the support of, and feedback from, their captain when they came off the ice.

"She is such a presence," defender Jocelyne Larocque said. "She makes sure whenever anyone does anything good, she's going right to them and saying 'hey, great play there' or 'nice pass' or 'nice blocked shot' or things like that.

"We have obviously a ton of respect for her and to have her on the bench, she was making all of us smile, keeping things light, keeping things positive, but when things needed to get said, she said them."

Canadian assistant and Les Canadiennes coach Caroline Ouellette believes Poulin's presence on the bench when she can't play both benefits her as a player and sets an important example.

"It's also an opportunity to grow for her into a role that's different," Ouellette explained. "She can really focus on her leadership skills.

"It's a good example for all our players no matter your role, you can add value. If someone is not playing because of whatever reason, she's seen our own captain and one of our best players do exactly that.

"It's going to inspire everyone to be a difference-maker in whatever role you're put into."