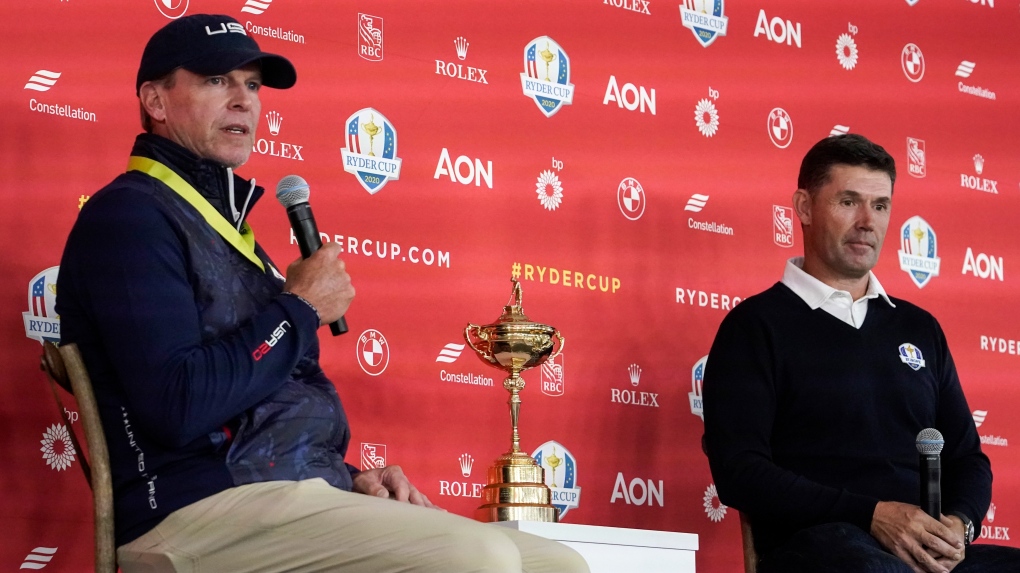 The Ryder Cup does not begin until Friday but the gamesmanship was well underway at Whistling Straits on Monday as European captain Padraig Harrington and his U.S. opposite number Steve Stricker put their poker faces on, refusing to tip their hands.

Players will spend the next three days getting a feel for the rugged layout that hugs the Lake Michigan shore with practices providing an endless source of speculation over possible pairings until all is revealed by the two captains ahead of Friday's opening session.

"That's your job in the media is to make a story out of it," said Harrington. "I'm not going to say what it means or what it doesn't mean (players practicing together).

"I do have ideas about what should be happening in practice, but it's for you to figure it out, not me to tell you."

Knowing much will be read into everything from players sharing a practice to sharing a laugh, Harrington and Stricker offered little in the way of hints but both admitted to well-developed strategies.

"We've got a really good, sound game plan already in place," said Stricker. "But again, there's always little things along the way that can creep up, anything.

The spotlight is going to be on feuding U.S. team mates Bryson DeChambeau and Brooks Koepka and how Stricker handles the big-hitters with bigger personalities.

Harnessing negative energy and turning it into a positive force has been tried before and failed miserably when the U.S. captain Hal Sutton partnered bickering Tiger Woods and Phil Mickelson in the 2004 Ryder Cup and flopped, failing to win a point.

But despite the frosty relationship Stricker would not completely rule out the possibility of sending the two out together as the U.S. tries to win the biennial event for just the third time in 10 tries.

"They have assured me it's not going to be an issue," said Stricker. "I have no worries whatsoever.

"Will we pair them together? I don't think so at this point but things could change. Could always happen."

Before Stricker decides who might partner Koepka he will have to determine if the world number 10 is fit to play after injuring his wrist earlier this month during the Tour Championships.

Stricker said Koepka had assured him he was good to go but will be keeping a close eye on practice.

"I've been talking to him ever since it happened," said Stricker. "Check in with him every couple of days. He tells me everything is 100% and everything is ready and raring to go."

(Reporting by Steve Keating in Toronto; Editing by Richard Pullin)