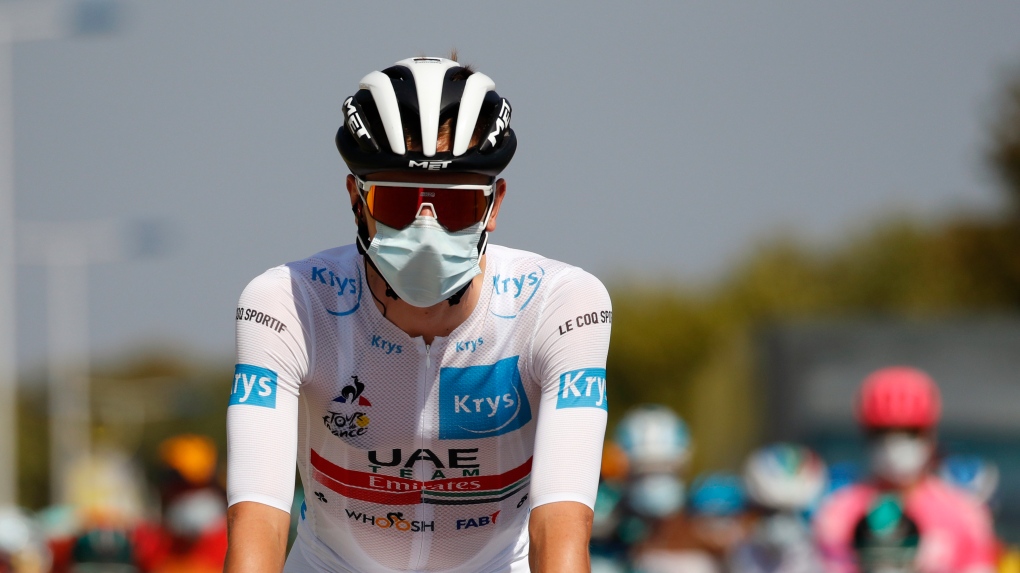 Slovenia's Tadej Pogacar, wearing the best young rider's white jersey, wait for the start of the stage 19 of the Tour de France cycling race over 166 kilometers (103 miles), with start in Bourg-en-Bresse and finish in Champagnole, Friday, Sept. 18, 2020. (AP Photo/Christophe Ena)

LA PLANCHE DES BELLES FILLES, FRANCE -- In an incredible climax to the Tour de France, Tadej Pogacar crushed fellow Slovenian Primoz Roglic in the last stage Saturday before the finish in Paris, all but guaranteeing that he'll win the title at cycling's greatest race.

Set, at one day shy of 22, to become the youngest post-World War II champion, Pogacar flew on the penultimate stage, an uphill time trial, devouring the 57-second lead that had made Roglic look impregnable before the showdown.

In the end, it wasn't even close. Pogacar was sensational, not only ripping the iconic race leader's yellow jersey from Roglic, but winning the time trial, too. Roglic managed no better than fifth, a whopping 1 minute, 56 seconds slower than his countryman.

Not since British riders Bradley Wiggins and Chris Froome finished 1-2 at the 2012 Tour has one nation taken the top two spots.

But almost everyone -- even Pogacar -- had been expecting that Roglic would be rolling into Paris with the yellow jersey on his shoulders, on his way to becoming Slovenia's first winner. Roglic had taken the race lead on Stage 9 and held it all the way to Saturday, the worst day to lose it. He now trails Pogacar by 59 seconds.

"I cannot believe how hard it must be for him," Pogacar said. "He must be devastated. But that's bike racing."

Only a major mishap Sunday -- highly unlikely -- on what is traditionally a leisurely and ceremonial ride into Paris before the final sprint to the line will prevent Pogacar from taking over from 2019 winner Egan Bernal, who was 22, as the youngest post-war champion.

"I can't wait to cross the line in Paris," Pogacar said.

Australian Richie Porte will complete the podium, having ridden his way from fourth to third overall in the time trial to the Planches des Belles Filles ski station in eastern France. Porte is a veteran of 10 Tours, but he'd only once finished in the top 10 -- a fifth place in 2016 -- before now in a career sometimes dogged by ill-fortune.

Aged 35, he had wanted a picture of him on the Tour podium before his career ends. He'll get that Sunday.

"It really does feel like a victory," Porte said.

He, too, said he felt for Roglic.

"It's kind of brutal what happened," he said.

The high drama was reminiscent of Frenchman Laurent Fignon's collapse in 1989. He had a lead of 50 seconds over Greg LeMond before the final stage, also a time trial, from Versailles to Paris. Fignon ended up losing to the American by just eight seconds -- the smallest ever margin of victory.

The 30-year-old Roglic slumped on the tarmac at the finish as the enormity of his collapse sank in.

Pogacar, who finished third at last year's Spanish Vuelta won by Roglic, might have had an even bigger lead by now had he not suffered a major setback in the first week of the three-week marathon, raced over more than 3,400 kilometres (2,100 miles) and all five of France's mountain ranges.

On Stage 7, Pogacar plummeted from third to 16th overall, when he was caught out in crosswinds that broke up the racing. But he shook off his disappointment and set about clawing his way back.

A win on Stage 9 ahead of Roglic in the Pyrenees soon followed and helped put him back in contention. In hindsight, Roglic may well rue that he and his Jumbo-Visma teammates didn't pay closer attention and allowed him so much leash.

Pogacar followed up with another victory on Stage 15 and had been in second place overall for the past week.

While Roglic was surrounded at the Tour by powerful support riders who laboured tirelessly to protect his race lead, Pogacar had no such luxuries. Beating Roglic in the man-to-man time trial, where riders raced alone against the clock, was a fitting tribute to the way in which Pogacar has often fought by himself at the race.