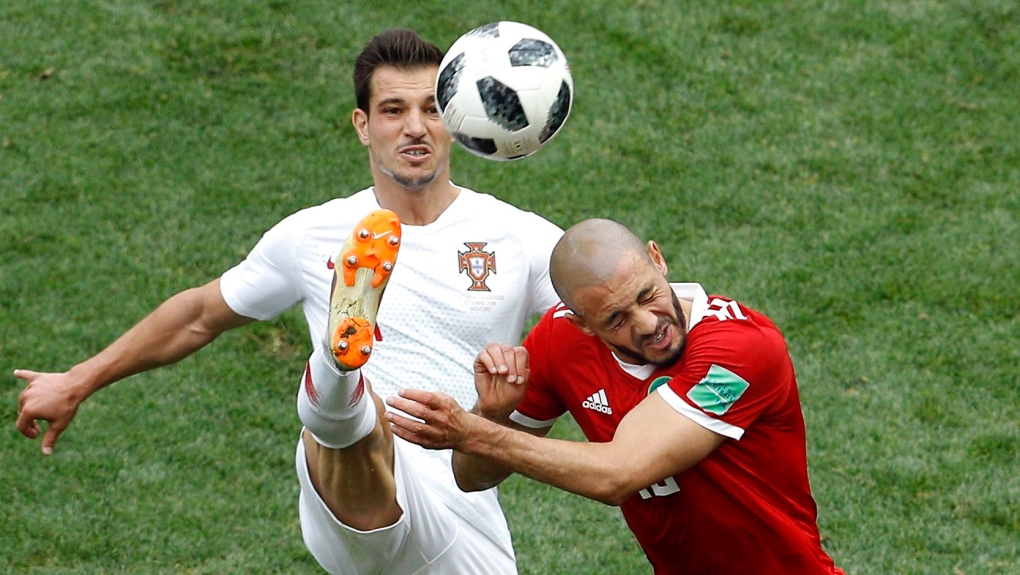 Portugal's Cedric, left, and Morocco's Noureddine Amrabat, right, challenge for the ball during the group B match between Portugal and Morocco at the 2018 soccer World Cup in the Luzhniki Stadium in Moscow, Russia, Wednesday, June 20, 2018. (AP Photo/Victor Caivano)

MOSCOW -- The impact to his head was so violent that Noureddine Amrabat can't remember the World Cup match at all, even though he was playing in it.

"When you think about it, it is a little bit scary."

Five days after a clash of heads sent him to hospital for a brain scan and 24 hours of medical supervision, the 31-year-old was back in the Moroccan lineup Wednesday and played the entire match in a 1-0 loss to Portugal, in defiance of FIFA guidelines and his team doctor.

The players' union, FIFPro, was highly critical of what it called "yet another alarming example of a player being put in harm's way."

STATEMENT: This is yet another alarming example of a player being put in harm's way. @NAmrabat53 returned to action too soon according to medical guidelines. 1/2https://t.co/AdcbSDPXhe

Despite having expressed shock about Morocco's initial pitch-side treatment of Amrabat's concussion last Friday, tournament organizer FIFA absolved itself of any responsibility in the team decision to field him again so quickly. Amrabat wore a padded skull cap for a quarter-hour but took it off because he was too hot.

After the initial concussion diagnosis, Morocco team doctor Abderrazak Hefti had said Amrabat wouldn't even train for a week.

But the player said that he overruled the physician.

A week without playing "is the official time to recover, official time for your safety. I decided to make it shorter," Amrabat said after the loss, which eliminated Morocco from contention. "I felt good. It's the most important. I am my own doctor. And hopefully nothing bad for the long term."

This wasn't the first time that concussion management in football has come under the spotlight at the World Cup. Jolted by criticism of concussion cases at the 2014 tournament , FIFA introduced guidelines intended to provide players with better protection and give team doctors more authority.

Moroccan team officials appeared to ignore the guidelines after Amrabat collided with Iran midfielder Vahid Amiri on Friday. Television images showed the apparently dazed Amrabat being sprayed with water and slapped on the face, seemingly to wake him from his stupor.

"There was a very clear concussion and we have instructed them very clearly and we spoke about the importance of proper treatment, which is why I was surprised at seeing the behaviour on the touchline," FIFA medical chief Michel D'Hooghe said Wednesday.

"We wrote to them after that to say it appeared the guidelines were not correctly followed," he said. "I will now ask for an explanation from the Moroccan team doctor about what has happened so that he played again."

He added: "FIFA has no authority over this. We produce the guidelines but it is the team doctors who make the decision."

"Four years on from the debacle of the last World Cup, where several players did not receive adequate care, football has not made sufficient progress in concussion management," FIFPro said. "Repeated calls to implement world-class standards have been overlooked."

The new case comes amid rising concern in soccer about the risks of concussion and the potential degenerative damage to players' brains from repeatedly heading balls. Britain's associations are funding a study to try to determine whether players are more prone to developing dementia.

NFL players with concussion symptoms during a game are examined both by the team doctor and an independent neuro-trauma expert approved by the league. The team doctor decides whether a player suffered a concussion, with consultation from the independent expert. Players diagnosed with concussions start a five-step protocol that includes additional testing as the player progresses from light exercise to football contact. There is no time limit, but it generally takes five days or more. The NFL diagnosed 281 concussions during the 2017 season.

Amrabat said his brain scan showed no damage. But he said he cannot remember anything from the Iran game, "from the first minute 'til I wake up in the hospital."

To broadcaster NOS, he added: "On the bench I asked the same thing 10 times. After the match in the changing room I asked where I sat and I asked my brother six times if he'd gone on as a substitute."

"I have a bit of pain here if I press it," he said running his finger along the area just left of his left eye, "but in the end you want to play in a match like this. I had a helmet sent over from the Netherlands. But in the end . I felt more tired than normal, quite quickly, heavy legs. But generally it went reasonably well."

"It's because his spirit is amazing and I was lucky to have a player like this."