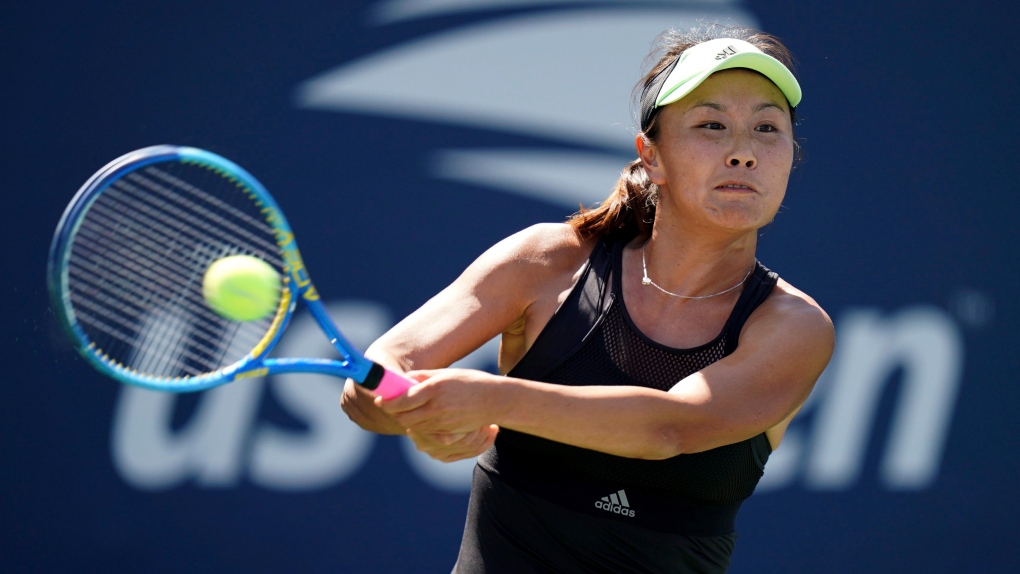 Peng Shuai, of China, returns a shot to Maria Sakkari, of Greece, during the second round of the US Open tennis championships Thursday, Aug. 29, 2019, in New York. (AP Photo/Michael Owens)

In an email statement on Saturday, the WTA says CEO Steve Simon has attempted to reach out to Peng "via various communication channels," including two emails "to which it was clear her responses were influenced by others."

Simon has therefore "decided not to re-engage via email until he was satisfied her responses were her own, and not those of her censors."

"The WTA remains concerned about her ability to communicate freely, openly, and directly," the statement concludes.

One of China's most recognizable sports stars, Peng publicly accused former Vice Premier Zhang Gaoli of coercing her into sex at his home, according to screenshots of a since-deleted social media post dated November 2.

On November 21, the International Olympic Committee (IOC) said in a statement that its president, Thomas Bach, had a 30-minute video call with three-time Olympian Peng, joined by a Chinese sports official and an IOC official.

The statement said that, during the call, Peng appeared to be "doing fine" and "relaxed," and said she "would like to have her privacy respected." The IOC did not explain how the video call with Peng had been organized.

However, Human Rights Watch (HRW) has criticized the IOC's role in collaborating with Chinese authorities on Peng Shuai's reappearance.

"It's a whole different order of magnitude to see Thomas Bach, in a photograph with a woman, Peng Shuai, under intense pressure, we can reasonably assume from other cases, to walk back her claims of sexual assault, rather than figuring doing everything in his and the organization's power to call that out and make sure that she is afforded the support and investigation and prosecution that may well be warranted," HRW China Director Sophie Richardson said on November 23.

Long-time IOC member Dick Pound told CNN's Christiane Amanpour this week he was "puzzled" by the reaction to the video call between Peng and Bach.

"Basically, lots of people around the world were looking to see what happened to Peng Shuai and nobody was able to establish contact.

"Only the IOC was able to do so, and there was a conversation that was held by video with Thomas Bach, who's an older Olympian, and two younger female IOC members. Nobody's released the video because I guess that aspect of it was private.

"They found her in good health and in good spirits and they saw no evidence of confinement or anything like that."

Pound added that he has not seen a recording of the video call, but is "simply relying on the combined judgment of the three IOC members who were on the call."

Zhang has kept a low profile and faded from public life since his retirement in 2018, and there is no public information relating to his current whereabouts.

Before retiring as vice premier, Zhang was the head of a Chinese government working group for the Beijing Games. In the role he inspected venues, visited athletes, unveiled official emblems, and held meetings to coordinate preparation work.

Zhang previously met with Bach, the IOC president who held a video call with Peng, on at least one occasion, with the two being photographed together shaking hands in the Chinese capital in 2016.