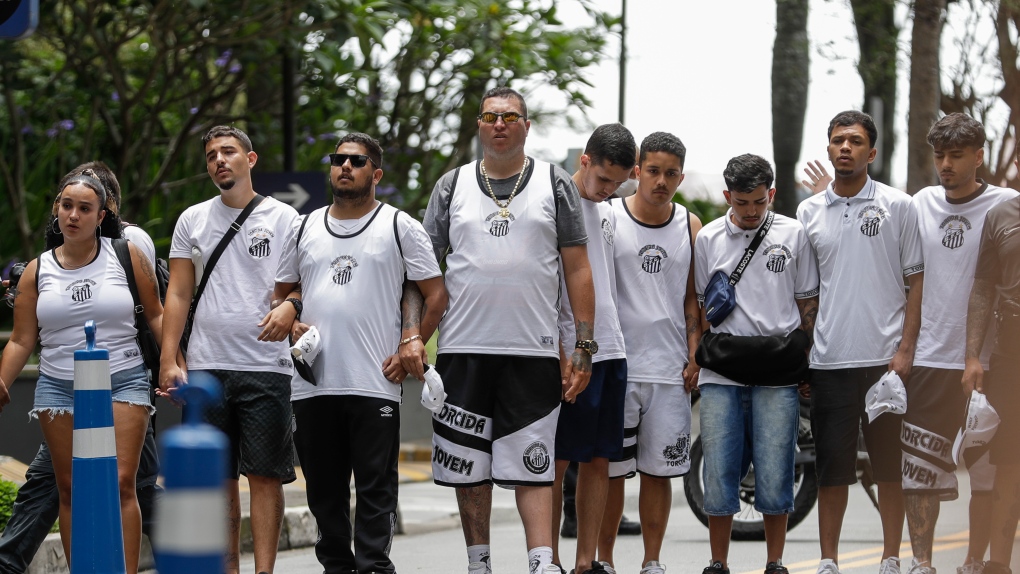 Santos soccer team supporters pray for the recovery of former soccer star Pele, in front of the Albert Einstein hospital where Pele is hospitalized in Sao Paulo, Brazil, Sunday, Nov. 4, 2022. The 82-year-old soccer great has been at the hospital since Tuesday and officials say he is responding well to treatment for a respiratory infection. (AP Photo/Marcelo Chello)
SAO PAULO -

Two daughters and one grandson of Brazilian soccer great Pele said the three-time World Cup winner has been hospitalized since Tuesday to treat a respiratory infection aggravated by COVID-19. They added that the 82-year-old is under no imminent risk of death.

Kely and Flavia Nascimento and Arthur Arantes do Nascimento said in an interview aired Sunday night that Pele, who is also undergoing chemotherapy in his fight against cancer, is expected to leave the Albert Einstein hospital in Sao Paulo once he fully recovers from the respiratory infection. Neither the family nor the hospital have any predictions in that regard.

The hospital said Saturday that Pele is responding well to treatment for the infection and his health condition had not worsened over the previous 24 hours. The hospital did not issue any statements on the former footballer's health Sunday.

"He is sick, he is old. But at the moment, he is there because of the lung infection. And once he feels better, he will go home again," Kely Nascimento told TV Globo. She lives in the United States and spoke on video.

"He is not saying goodbye in a hospital at the moment," she added.

Edson Arantes do Nascimento, who is globally known as Pele, had a colon tumour removed in September 2021, but neither his family nor the hospital have said whether it had spread.

Flavia Nascimento said in the interview that Pele is yet to have a remission of his colon cancer but is now regulating his medication with doctors to keep fighting.

"It is very unfair for people to say he is in the end of his life, in palliative care. Guys, that's not true. Believe us," she said. "He is not in intensive care, he is in a regular bedroom. He is not in risk, he is in treatment."

Newspaper Folha de S. Paulo reported Saturday that Pele's chemotherapy is not working and that doctors had decided to put him on palliative care. The Associated Press could not confirm that information.

Arthur Arantes do Nascimento said he is debating World Cup matches with Pele by phone, which he believes shows the 82-year-old is fully aware in hospital.

Pele's grandson said the former footballer missed injured star Neymar at Brazil's latest two matches in Qatar – a 1-0 win against Switzerland and a 1-0 defeat of the reserves against Cameroon, both in group stage. Brazil faces South Korea on Monday in the round 16, with Neymar possibly returning to the team.

Arthur Arantes do Nascimento also said his grandfather was moved by tributes that have poured from around the world on the last few days. Since Saturday, about a hundred fans of his lifelong club Santos came for a vigil, prayers and tributes to the soccer great. Fans, players and coaches taking part in the World Cup wished him well by multiple means.

"I see people telling me `rest in peace' (for Pele). One day it will happen, but it is not today," Arthur Arantes do Nascimento said. "He is going to be well, it is a matter of time. He will see Brazil lift the sixth title."