Pearn out as head coach of Canadian women's hockey team, Ryan takes over 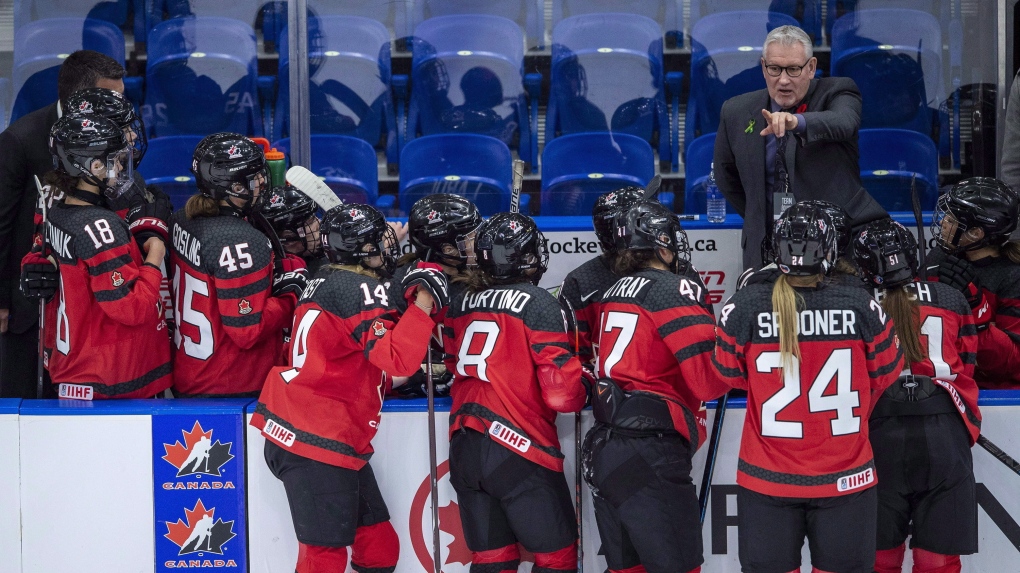 Canada head coach Perry Pearn speaks to his players as they take on Sweden during first period of 2018 Four Nations Cup preliminary game in Saskatoon, November 6, 2018. THE CANADIAN PRESS/Liam Richards

CALGARY -- Perry Pearn has been dismissed as head coach of the Canadian women's hockey team, less than three months before the start of the world championship.

"We have made a difficult decision to relieve Perry Pearn of his head coaching duties," said Gina Kingsbury, Hockey Canada's director of national teams, in a statement to The Canadian Press on Thursday.

"Effective immediately, associate coach Troy Ryan will take over that role. With where we are now, we believe Troy is best suited for our team."

Canada was upset by host Finland in the 2019 world championship semifinal and did not play the United States for gold for the first time in the history of the tournament.

Canada is 2-2 against the reigning world and Olympic champion Americans this season.

Hockey Canada made Ryan the head coach and Pearn his assistant in a pair of November exhibition games against the U.S., which Canada won 4-1 and 5-2 in Pennsylvania.

Pearn resumed head coaching duties for December's first two games of a five-game Rivalry Series against the U.S. Canada lost 4-1 in Hartford, Conn., and 2-1 in Moncton. The remaining games are set for Feb. 3 in Victoria, Feb. 5 in Vancouver and Feb. 8 in Anaheim, Calif.

Pearn, a former NHL assistant coach for 21 years with multiple teams, joined the women's coaching staff as an assistant to Laura Schuler just prior to the 2018 Winter Olympics in Pyeongchang.

He was named head coach of the team later that year. Ryan, from Spryfield, N.S., has been an assistant coach of the national women's team since 2016.

The Americans have won eight of the last 10 world titles, including five straight gold.