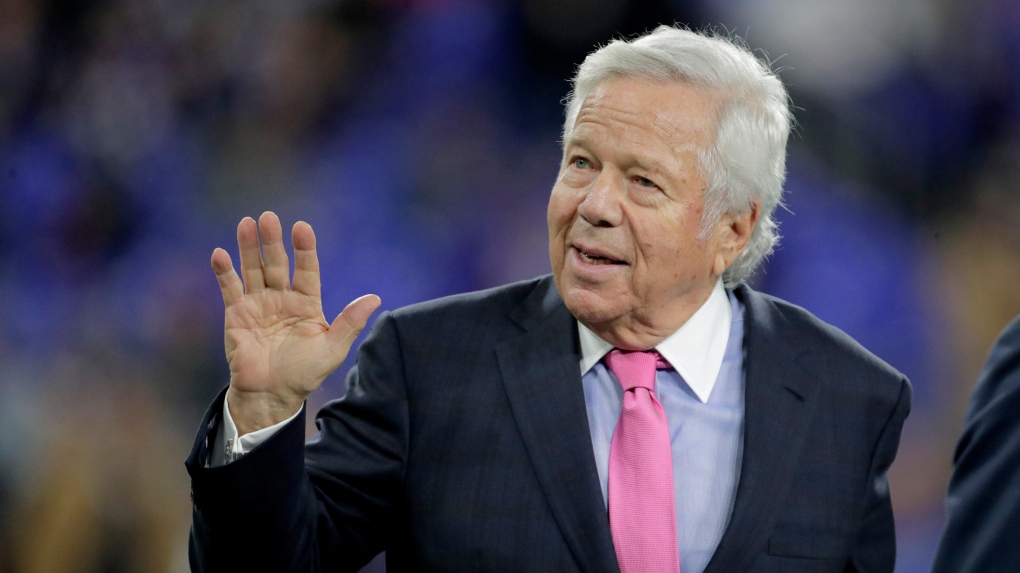 A Florida appeals court ruled that police violated the rights of New England Patriots owner Robert Kraft and others when they secretly video recorded them paying for massage parlor sex acts, barring the tapes' use at trial and dealing a potentially deadly blow to their prosecution. (AP Photo/Julio Cortez, File)

Palm Beach County State Attorney Dave Aronberg said during an online press conference that without the video recordings of Kraft, 79, and two dozen other men paying for sex at the Orchids of Asia Day Spa, there wasn't enough evidence to convict them.

"We are ethically compelled to drop all cases," he said.

Kraft's attorneys declined immediate comment. He could still face suspension or other punishment from the National Football League. The NFL did not respond to a request for comment and the Patriots declined comment. Shortly after being charged, Kraft issued an apology for his actions.

Aronberg said that even though the charges were dropped against the spa's customers, the felony cases against its owner and manager will proceed using evidence such as bank records.

He said no one should doubt what occurred there. He said rich men from a local country club "lined up" to purchase sex at the spa, which was in a suburban shopping centre near a supermarket, restaurants and other businesses.

"The Orchids of Asia Day Spa was a notorious brothel in a family shopping centre right next to a game room that attracted children," he said. "Although we cannot prove human trafficking beyond a reasonable doubt, there was evidence of human trafficking in the overall investigation."

The attorney for owner Hua Zhang was surprised to learn of Aronberg's decision to proceed against her client, saying prosecutors told a judge they needed the recordings for the case to stand.

"It is beyond ironic that the State's entire prosecution was allegedly motivated by a desire to protect women from abuse," attorney Tama Beth Kudman said in an email. "Yet, even after stating that the state did not have sufficient evidence to prosecute these women without the video evidence, the State persists in proceeding against them, while dismissing the charges against the men."

The attorneys for manager Lei Wang did not immediately respond to emails seeking comment. The women have pleaded not guilty to deriving income from prostitution.

The recordings, which have not been made public, are the only known evidence the men paid for sex. Of the other men charged, 19 cases were dropped. Three men went through a diversion program, paying more than $5,000 in costs. One pleaded guilty last year and paid $323 in court costs. Another man went home to Norway.

The 4th District agreed last month, saying that planting video cameras in private spaces is an "extreme" measure that should only be used when absolutely necessary.

Prosecutors decided this week not to appeal to the Florida Supreme Court, saying a loss there could have "broader, negative implications" on future law enforcement investigations beyond the Kraft case. Aronberg said that while he disagreed with the court's decision, he respected it.

Attorney David Weinstein, a former prosecutor who has followed the case, told The Associated Press that the police and the prosecutors clearly had sufficient evidence to get the warrants allowing the cameras to be secretly installed, but didn't follow rules designed to protect the privacy of the innocent.

"The sole fault was in the execution of the warrants," he said. "Keep in mind that none of this says that what Kraft or any of the other clients did was legal, it simply says that the state does not have sufficient evidence to prove their case."

Kraft's attorneys have already filed a motion asking that the recordings be destroyed so they could never be released to the public. They said Kraft might be willing to pay the state's costs if anyone challenges a destruction order. Aronberg said that because of a civil lawsuit filed against his office over the case, the recordings are still evidence. He said he doesn't intend to release them.

Kraft and the others were charged in February 2019 in a multicounty investigation o f massage parlours that included the installation of video cameras in the Orchids of Asia's lobby and rooms under the ruse that a bomb threat required its evacuation. Police say the recordings show Kraft and other men engaging in sex acts with women and paying them.

Police say they recorded Kraft, a widower, paying for sex acts at the spa on consecutive days in January 2019, including the morning of the AFC Championship game that the Patriots won in Kansas City that evening.

If he had been convicted, Kraft would have likely received a fine, community service and other sanctions that did not include jail time.

According to Forbes Magazine, Kraft is worth almost $7 billion. He employed several high-priced attorneys to defend him in the case.