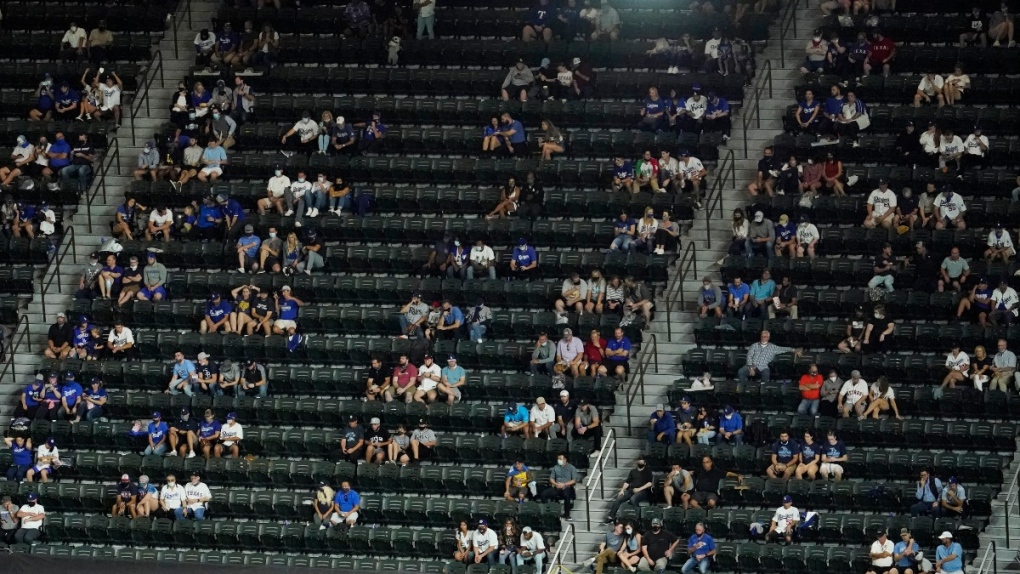 Tampa Bay infielder Joey Wendle is married to one of their cousins, and they weren't going to miss his World Series debut.

"It's kind of nice in a way, too," Lance, 39, said before they headed to their seats in the first deck behind home plate.

They wore masks, but many fans ignored the requirement for facial coverings except while eating or drinking at their ticketed seats.

A crowd of 11,388 attended the Los Angeles Dodgers' 8-3 win over the Tampa Bay Rays in Tuesday night's World Series opener, spread in groups of up to four, mostly in alternate rows and none directly behind each other among the forest green seats.

That was the smallest Series crowd since 10,535 attended Game 6 in 1909 between the Tigers and Pittsburgh at Detroit's Bennett Park, according to the Elias Sports Bureau.

Major League Baseball planned to make about 28% available of the 40,518 capacity at the retractable-roof stadium of the Texas Rangers. The new $1.2 billion venue opened this year and replaced Globe Life Park, the team's open-air home from 1994 through 2019. During batting practice, through the new stadium's glass walls, the sun glistened off the red brick of the old stadium across the street beyond left field, a field now used for high school football.

Behind home plate, the Dallas Cowboys' AT&T Stadium gleamed like a spaceship.

World Series games are usually festive, packed early with fans celebrating the dual accomplishments of their team making it to baseball's ultimate stage and of their snagging hard-to-find tickets, usually displayed in plastic hanging from lanyard draped around their necks.

But this World Series had a surreal, at times sombre feel caused by the novel coronavirus pandemic. The small crowd was supplemented with fan audio from stadium speakers.

No fans were allowed into any of the 898 regular-season games this season, which were played in mostly empty ballparks due to governmental health restrictions.

Players' families were allowed starting for the 18 first-round playoff games, the 15 Division Series games and the AL Championship Series between Tampa Bay and Houston in San Diego, with fans added for the Dodgers' matchup against Atlanta in the NL Championship Series in Arlington, an average of 10,835 for the seven games. Roughly the same amount of tickets were sold for each World Series game.

Behind third base, a group of fans in Dodgers gear watched after flying in.

Brian Casey, a 29-year-old from Glendale, California, booked a plane ticket ahead of Sunday night's win over the Braves, knowing he had 24 hours to cancel without penalty, then made a decision after the Dodgers rallied for a 4-3 win. He was in attendance when they last won the World Series in 1988 as a kid and was at Dodger Stadium when they played Boston in 2018. He watched Tuesday with Ryan Radenbaugh, 37, from Burbank.

"We just went to buy souvenirs and it was all Rangers stuff," Radenbaugh said.

Noah Garden, MLB's chief revenue officer, said the pandemic made it difficult to get gear shipped in the short time after teams won pennants last weekend.

MLB made the decision to play with the roof open. It was closed until the Dodgers started to warm up about 3 1/2 hours ahead of first pitch, then slid open as the public address system played Strauss' "Also Sprach Zarasuthra," known to many as the opening music from Stanley Kubrick's "2001: A Space Odyssey."

The usual pregame introductions of teams were dispensed with. When the a cappella group Pentatonix sang a recorded version of "The Star-Spangled Banner" played on the 58x150-foot video board in right field and the 40-x111-foot board in the left-field corner, about 18 Dodgers were in front of the first base dugout and on the right field line, and roughly a dozen Rays were by the third base dugout and on the left-field line.

A live flyover of four jets followed, and ceremonial first pitches were thrown by medical personnel who assisted during the pandemic: Brittney Burns, a nurse practitioner from San Antonio; Erika Combs, an oncology and kidney transplant nurse at a Dallas hospital; and Jamie Edens and Ryan Ward, nurses from Tulsa, Oklahoma, who are a married couple.

Texas Gov. Greg Abbott, who was on hand, yelled "Play Ball!" into a microphone and retired Dodgers announcer Vin Scully delivered by video recording: "It's time for Dodger baseball!" just before Clayton Kershaw walked to the mound.