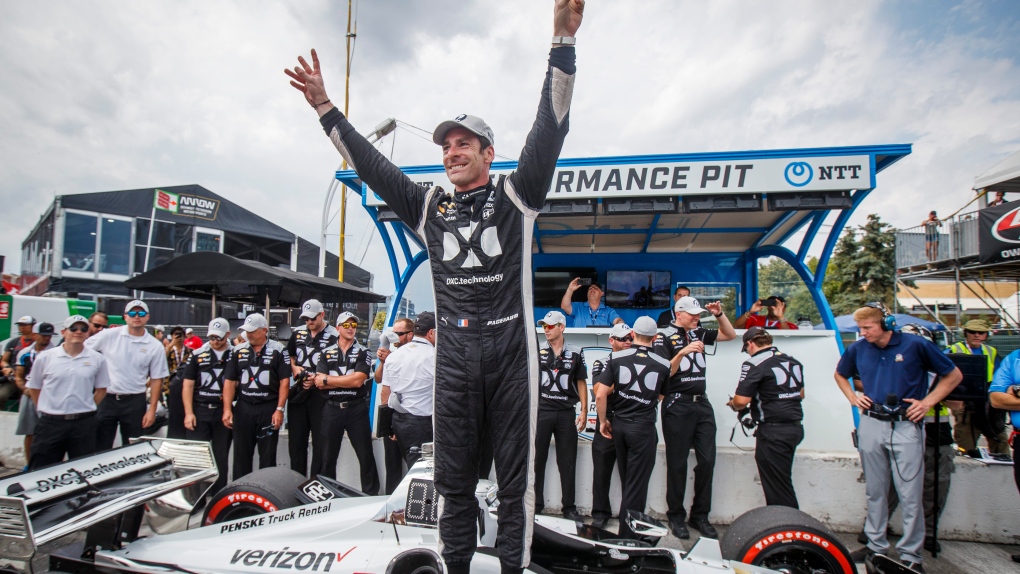 TORONTO -- Seven weeks ago, Simon Pagenaud was racing to victory on the wide-open speedway of the Indianapolis 500. Sunday, he captured the Honda Indy Toronto title, manoeuvring through the tricky hairpins turns on Toronto's notoriously bumpy road course.

If it takes a complete driver to capture the IndyCar Series title, Pagenaud proved in Toronto he has the full package.

The 35-year-old Frenchman led wire to wire on the streets around Exhibition Place to capture his first title in Toronto and third of the season, cranking up the IndyCar championship fight with six races to go.

"Never count me out. That's all I can say," said Pagenaud, who trails series leader Josef Newgarden by 39 points. "We won the biggest race in the world (Indy 500). We just won an awesome race. It's a long championship. You've got to build it. It's going to be a great fight in the end."

Bring it on, Pagenaud said. He welcomes the pressure.

"I do very well under pressure. It just drives me," he said. "I love it because that's when you have to extract more out of yourself. There's no other way to go. You can't turn back. It's just time to go for me right now. It's championship time."

Pagenaud was forced to save fuel over the last couple of laps while holding off defending champion Scott Dixon. But Will Power crashed to cause a caution on the final lap, allowing Pagenaud to cruise to the finish.

Dixon, who's said he will need off-season surgery for a nagging elbow injury, was second, and Alexander Rossi was third. James Hinchcliffe of Oakville, Ont., who started 14th on the grid, finished sixth.

"What's really cool about IndyCar is the different tracks," he said. "Indy, the Speedway, is so different to Indy Toronto, it's pretty much big opposites. You're going through streets, you're braking really hard, you're sliding (in Toronto). In Indy, you've got to be really smooth, doing 240 miles per hour. Here we have the slowest corner on the calendar with the hairpin in Turn 3.

"That's the beauty of IndyCar. That's what I love."

The 35-year-old Pagenaud and his Team Penske Chevrolet had been the class of the field all week, earning the pole after recording the fastest lap in a pair of practice sessions.

His fast driving continued on Sunday. Pagenaud led by as many as eight seconds. On Lap 35, and with a 6.04-second lead on the field, he told his team "I'm just cruising, really."

But Dixon, a five-time IndyCar Series champion and three-time winner in Toronto, roared back and cut the gap to about a half second with 18 laps to go.

"My really only (passing) option was probably on the first corner," Dixon said. "(Pagenaud) overshot, I had a pretty good run on the inside. He started to back out, I bailed out of it, braked. I think it was just really hard to get close to cars today."

Takuma Sato was running a great race in fifth place when flames shot up from his Rahal Letterman Lanigan Racing Honda on Lap 67.

"Being able to win for France, after winning Indianapolis, it's been a special year," he said. "I'm very proud to fly the French flag here in a cousin country, which is Canada.

"I guess the French guy (Julian Alaphilippe) is leading the Tour de France today on the bike. I felt like I had to do the same. Super proud."

Hinchcliffe made the biggest move of the day, from 14th to sixth.

"With the race playing out the way it did, there wasn't a lot of strategy to be had with tires, with fuel," the Canadian said. "There were really no notable cautions to bunch the field back up. We didn't really have any help today. We had to kind of do it on the racetrack."

The Toronto race hasn't seen a Canadian winner since hometown favourite Paul Tracy stood atop the podium in 2003. Tracy also won in 1993.

Robert Wickens of Guelph, Ont., led an emotional parade lap in a car equipped with hand controls. It was his first time driving since he suffered a spinal cord injury in a crash last August. His fiance Karli Woods rode in the passenger seat.

The Exhibition Place crowd erupted in a roar when Wickens hit the throttle and the pair took off for their lap.

"You could hear the cheers every corner of the racetrack even from inside the car," said Hinchcliffe, Wickens' teammate and close friend. "Awesome to see him back on track, home crowd, awesome to see the support he's had."

Wickens also gave the start command, saying: "Future drivers of mine, start your engines!" -- a nod to potentially owning his own team one day.