Out of shadows of Irish golf, Lowry a major champion 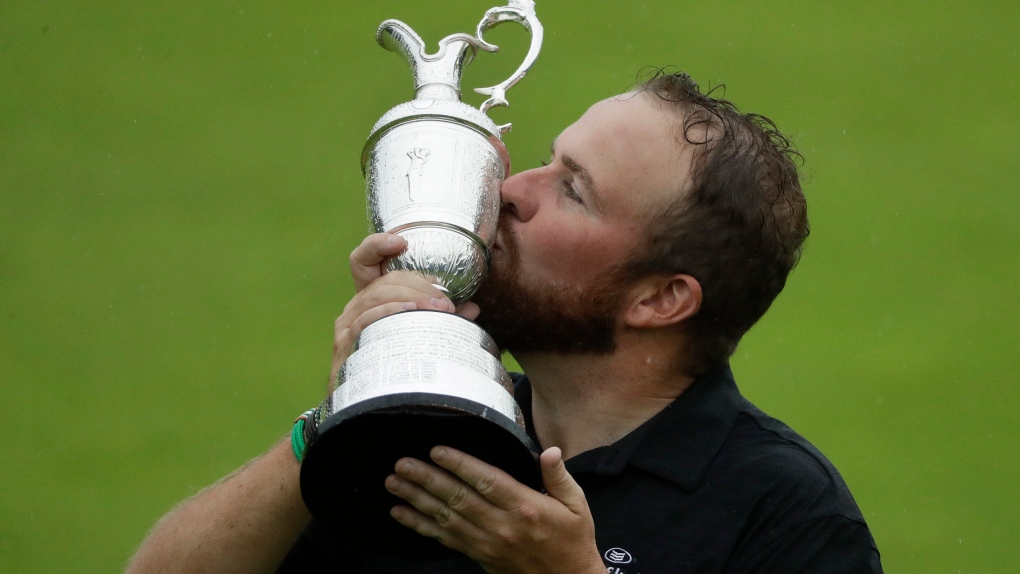 PORTRUSH, Ireland -- No longer in the shadows of Irish golf, Shane Lowry now has his name etched on the base of the silver claret jug.

It's on there with more than a century's worth of the best that have conquered the links to win the British Open. Lowry gazed at the oldest trophy in golf as he tried to soak up his storybook finish Sunday at Royal Portrush, a course wet from rain and then from tears.

"I can't believe this is mine," Lowry said after his six-shot victory.

He earned his place with a 63 in the third round that broke the 54-hole scoring record at the British Open and staked him to a four-shot lead. And then he handled the nerves and expectations, both in abundance, and never let anyone closer than three shots.

A year ago, Lowry sat in a parking lot at Carnoustie and cried after missing the cut in the British Open for the fourth straight year.

"Golf wasn't my friend at the time," he said.

And there he was Sunday, in rain and wind so ferocious that pars felt like birdies, never giving anyone much of a chance as he closed with a 1-over 72 for the largest margin of victory in the Open in nine years.

Lowry isn't afraid to be honest, and he didn't mind telling caddie Bo Martin that he was nervous, scared and worried he would mess up for a raucous, rollicking crowd that wanted nothing more than to celebrate with him.

"I suppose I didn't even know going out this morning if I was good enough to win a major," Lowry said. "And look, I'm here now, a major champion. I can't believe I'm saying it, to be honest."

So many others in the Irish golf community can.

Graeme McDowell recalls a story from famed swing coach Pete Cowen, who long ago travelled to Dublin to scout the Irish Boys golf team. They were curious about his views on the obvious star -- a teenager named Rory McIlroy -- except that Cowen saw more.

"The guy said, 'Who do you like?' And he said, 'Rory McIlroy looks pretty good, but that slightly overweight kid with the glasses on ... he looks good,"' McDowell said. "So he's always been talented."

That kid was Lowry, so talented that he was still an amateur 10 years ago when he won the Irish Open at County Louth.

McDowell remembers something else about that Irish Open, the first time he met Lowry.

That kid is now "champion golfer of the year."

Lowry could barely contain his joy when he rolled in an 8-foot birdie putt on the 15th hole for a six-shot lead with three to play. He knew it was over when he found the fairway on the 17th because "I knew that I could really lose a ball from there."

The cheers got louder with each step closer to the finish line, and Lowry stretched out his arms when his second shot to the 18th was safely on the fringe. Waiting to celebrate with him was McDowell, a former U.S. Open champion who grew up at Portrush; Padraig Harrington, who preceded Lowry as the first Irishman to win a major; four-time major champion Brooks Koepka and his caddie, Rickie Elliott, also raised at Portrush and once a promising amateur in Irish golf.

Lowry was asked earlier in the week if he felt like a forgotten Irishman.

The return of the British Open to Northern Ireland for the first time in 68 years was all about McIlroy, McDowell and Darren Clarke, a trio of Ulstermen with major championships. No one in these parts -- the largest Open crowd outside of St. Andrews -- will forget Lowry and his performance.

"Everyone knows we're all one country when it comes to golf," Lowry said.

The names on the claret jug include Harry Vardon and Bobby Jones, Jack Nicklaus and Tiger Woods. Lowry would be equally satisfied to see his name below Clarke and McIlroy, Harrington and Fred Daly.

He held the jug aloft on the 18th green and said to crowd, "This one's for you."

Lowry was headed home for a celebration -- the Irish are known for that, too.

He won for the fifth time in his career, a short list that includes big wins -- the Irish Open as an amateur, a World Golf Championship at Firestone, and earlier this year in the Abu Dhabi Championship.

"The one thing you want to do is back up your success," Lowry said. "In the short term, I'm going to enjoy this, there's no doubt about that. My big goal still remains the same, and that is to be on the plane going to Whistling Straits next year (for the Ryder Cup). Hopefully, that involves a couple of wins along the way."

It will be hard to beat this one -- an Irishman winning the first Open in Northern Ireland since 1951.

He stood near the tunnel leading to stairs away from the 18th green with family, friends, coaches and major champions. He wasn't the other Irishman or even the forgotten Irishman. He was a major champion.

"He can create his own shadows," McDowell said.