One Bad Boy gallops to victory in $1M Queen's Plate 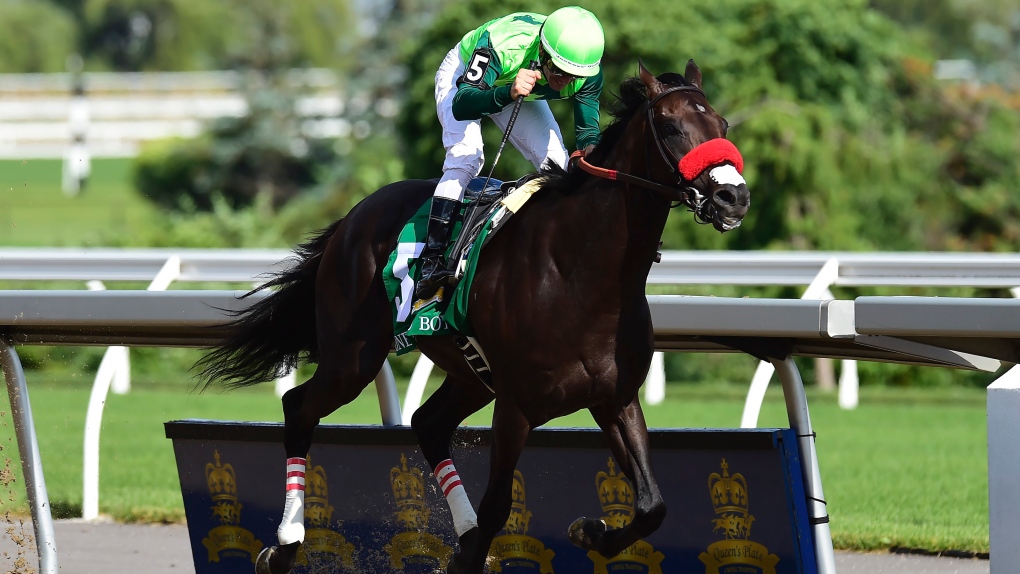 One Bad Boy, ridden by jockey Flavien Prat, crosses the finish line to win the Queen's Plate at Woodbine Racetrack, in Toronto on Saturday, June 29, 2019. (THE CANADIAN PRESS/Frank Gunn)

TORONTO -- Flavien Prat didn't have to worry about the inquiry sign Saturday.

Prat rode One Bad Boy to victory in the $1-million Queen's Plate at Woodbine Racetrack. There was a stewards inquiry after the race but it was directed towards third-place finisher Tone Broke, who appeared to interfere with 2/1 favourite Skywire at the start but the result remained unchanged.

That day, Prat was forced to wait nearly 20 agonizing minutes before being credited with winning the first jewel of the American Triple Crown. On Saturday, he celebrated capturing the opening leg of Canada's Triple Crown in the winner's circle as stewards pondered Tone Broke's fate.

"I won the Derby and the Queen's Plate this year," Prat said. "It's an amazing year so far for me.

Prat is the first jockey since Kent Desormeaux to do the Derby-Plate double in the same year. Desormeaux did it in '98 Derby with Real Quiet and the Plate with Archers Bay.

Bill Hartack also accomplished the feat in 1964 with the legendary Northern Dancer.

Avie's Flatter broke from the outside post in the 14-horse field but jockey Javier Castellano quickly settled the 5/2 second favourite into second behind One Bad Boy. And the two duelled until One Bad Boy took off down the stretch for a 3 1/2-length win after finishing the 1 1/4-mile race in 2:02.98 on Woodbine's Tapeta course.

"He (Avie's Flatter) was next to me so I knew he was the horse to beat," Prat said. "By the eighth-pole, I asked him to re-engage and he drove away.

"So from that point, I thought I was going to win."

One Bad Boy went wire-to-wire in his Canadian debut, a tactic Prat said wasn't by design. He took the California-based three-year-old to the lead from the start only because no other jockey wanted to assume the No. 1 spot.

"My point wasn't to go on the lead," Prat said. "But I broke well and all of a sudden nobody was going for it so I said, 'I better take it when I can.'

"The way the whole thing went, I thought it was the right move."

The win was One Bad Boy's second in five career starts (two seconds, one third all in California). He was the runner-cup in his previous race, the mile-long Alcatraz Stakes on May 19 with Prat aboard.

"Many people thought he couldn't run 1 1/4 miles," he said. "But he proved that last 16th he could pull away and for me that was probably the most exciting thing, other than winning the race."

One Bad Boy's connections paid $5,000 to supplement the horse into the Plate. The decision paid off handsomely as the winner's share was a cool $600,000 and that boosted One Bad Boy's all-time earnings nearly 10-fold.

"We knew he was really good training but we just couldn't find the right race for him," said Hall. "We felt he could've been a horse for the Triple Crown in the U.S. but he just didn't have the points or raced enough . . . so we pointed (to) this probably three or four months ago."

Running One Bad Boy in the Plate was the brainchild of bloodstock agent Brooke Hubbard. Now, a decision must be made whether to race One Bad Boy in the second leg, the $400,000 Prince of Wales Stakes, a 1 3/16 dirt race at Fort Erie Racetrack on July 23.

"We didn't take that (Prince of Wales) into consideration," Hubbard said. "We kind of think he's definitely more turf than dirt so that's our main concern if we do decide to go to the next leg.

"We're definitely going to have to have a little strategizing party and talk it over and see what happens."

Prat said if One Bad Boy's connections decide to take a run at the Canadian Triple Crown, he's definitely game.

"If the opportunity is there why not?" he said.

Wando was Canada's last Triple Crown winner, achieving the feat in 2003. This year, a $500,000 is being offered to the connections of a horse winning all three legs.

Also on Saturday, Alex Cintron rode Wet Your Whistle to victory in the $304,800 Grade 1 Highlander Stakes. The four-year-old gelding earned a 1 1/2-length win over Extravagant Kid in 1:07.88 over six furlongs on a firm turf.