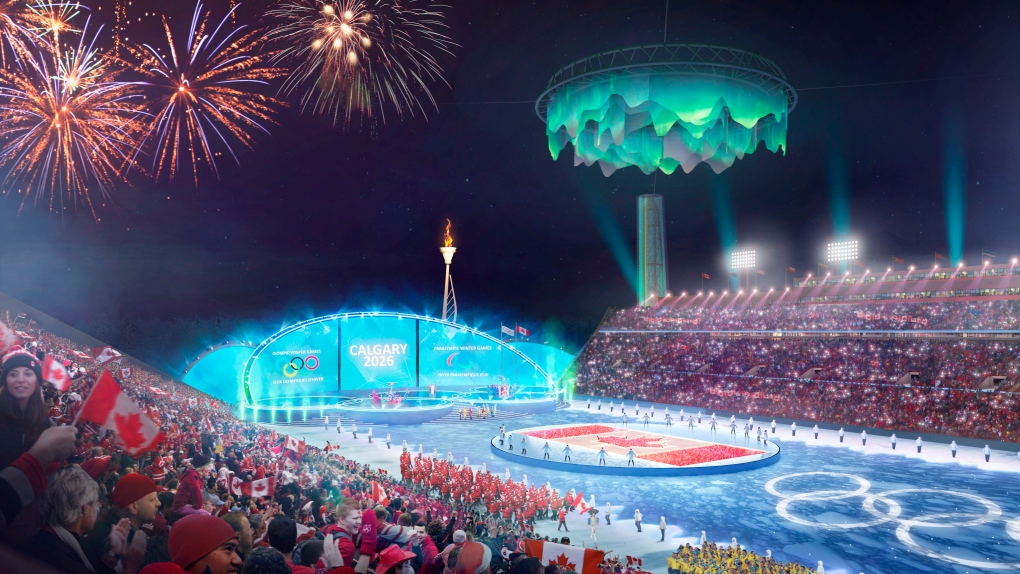 An artist's rendering of a refurbished McMahon Stadium in Calgary is seen in this handout image. THE CANADIAN PRESS/HO, Calgary 2026 Bid Corporation

CALGARY -- A potential Calgary bid for the 2026 Winter Games includes a plan to make the city's aging football stadium more accessible to people with disabilities.

Fergal Duff, with the Calgary 2026 Olympic and Paralympic bid corporation, said renovations on McMahon Stadium are estimated to cost $80 million out of the $500 million earmarked for refurbishing existing venues.

Another $400 million is expected to be spent on a new field house and mid-sized arena.

"I truly believe that whatever good things we build, end up building us," said Duff, the bid corporation's director of venues, villages and capital infrastructure.

With just four days until a non-binding vote on whether the 1988 host city should ask for another turn, Calgary 2026 released mock-up images of what some revamped and new venues could look like.

Duff said structures between the columns at McMahon would be removed, doubling the size of its currently cramped circulation area. There would also be new washrooms and concession areas.

"It will really be a dramatic change in terms of what it will look like," he said.

McMahon Stadium, home of the CFL's Calgary Stampeders, was built in 1960 and was the venue for the opening and closing ceremonies during the 1988 Calgary Olympics.

The stadium, which currently seats around 35,000 and has not been renovated since 2005, would be used for the same purpose if Calgary ends up hosting the 2026 Games.

Multi-medal-winning biathlete and Nordic skier Mark Arendz, who was the flag bearer at the closing ceremony of the Pyeongchang Paralympic Games earlier this year, said the accessibility improvements would be meaningful.

"These minor adjustments will make a big difference in the lives of those who use it every day and all those generations to come for the next 30 years hopefully."

David Legg, past president of the Canadian Paralympic Committee, said there may not be a huge, quantifiable economic benefit, but the changes mean spectators with disabilities would not be segregated in one specific place.

"That, then, allows persons with a disability to be more integrated fully into our society which then can have all kinds of dramatic impacts," said Legg, who chairs Mount Royal University's health and physical education program.

"I see these games as an opportunity to take a giant leap forward as it relates to the accessibility of our facilities, this just being one example."

Bid skeptics have questioned whether the investments being pitched as part of the bid would have been made anyway.

"Anyone with an asset needs to plan for upgrading and maintaining," said Erin Waite, spokeswoman for No Calgary Olympics, which has an anti-bid rally planned for Saturday.

"And so that's no different whether the Olympics are here or not. That work has to be done."

Looking at the renderings provided by the bid group Friday, Waite questioned whether the refurbishments would actually be more cost-effective than building from scratch.

"With such elaborate upgrades, I think the cost overrun would be just the same as a new build."

The bid's total pricetag is about $5.1 billion, $2.875 billion of which would come from municipal, provincial and federal coffers. Games revenues would cover the rest.

Other than McMahon's makeover, Duff did not provide a breakdown of exactly how much would be spent to spruce up other facilities.

A venue for curling has not been chosen, but Duff said four different options in Calgary and the surrounding area are being considered.