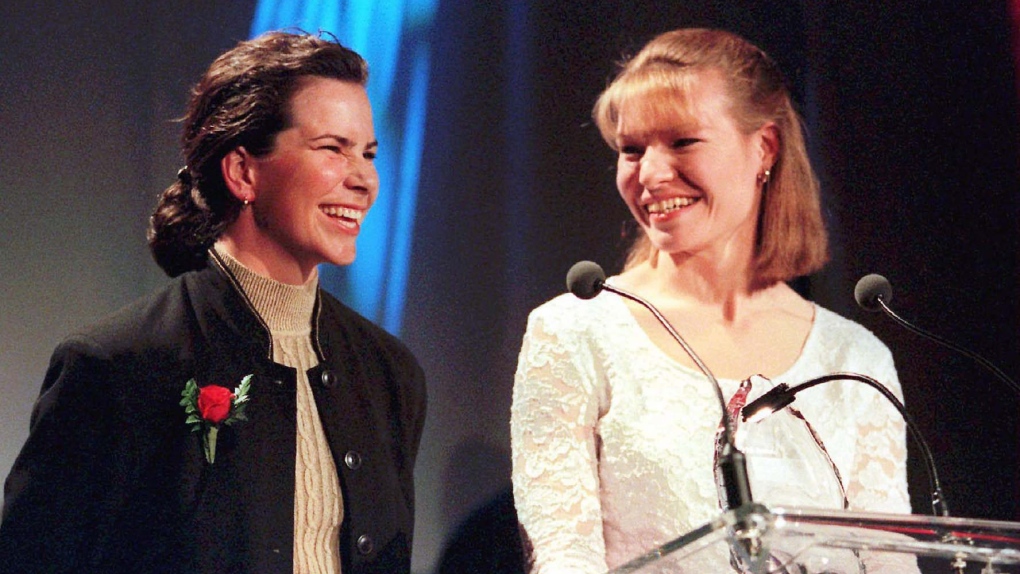 This file photo from 1997 shows Marnie McBean (left) and Kathleen Heddle (right) who are all smiles after winning the award for outstanding pairs at the Canadian Sport Awards in Toronto. (CP PHOTO)1997(str-Kevin Frayer)

Canada's Heddle and Marnie McBean won Olympic gold medals in 1992 and 1996 in the coxless pair and double sculls respectively. Heddle also earned gold with the women's eight in 1992.

"I am crushed and without words today at this loss," McBean wrote Wednesday in a social-media post. "Too soon."

She died Monday at home in Vancouver, according to a Rowing Canada statement issued Wednesday on behalf of her family.

"While our grief is as heavy as the darkest moment of night, the gifts given to us by Kathleen shine bright as the moon and stars," her family said in the statement.

"With time, memories of our happiest days with Kathleen will be sure to overcome our tears."

The statement included a November, 2020 quote from Heddle: "How is it that amongst some of the worst days ever, you can also experience some of the best?"

Heddle was born in Trail, but her family moved to Vancouver when she was an infant. She became a rower while attending the University of British Columbia.

Heddle and McBean are the only Canadian athletes to win three gold medals in Summer Olympic Games. They also claimed gold in the pair at the 1991 and 1995 world championships.

"Kathleen had an incredible sense of touch, seemingly aware of the natural rhythm and flow in things," her family wrote in its tribute to her.

"Kathleen loved the serenity of being on the water and in nature, always a proponent of wearing a hat and sunscreen, even on a cloudy day."

Heddle and McBean were inducted into Canada's Sports Hall of Fame in 1997. Heddle is survived by her husband Mike and children Lyndsey and Mac.