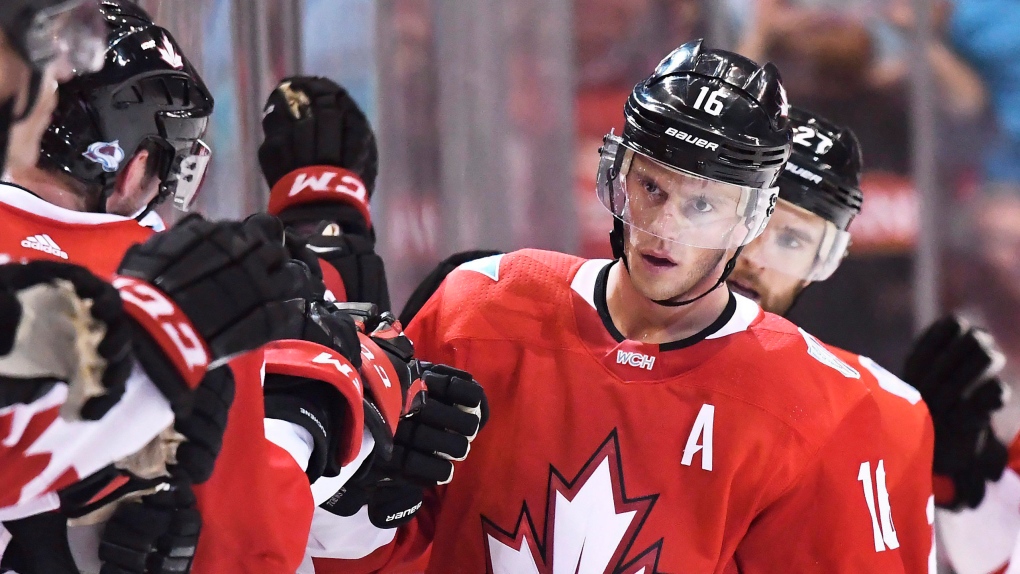 Team Canada's Jonathan Toews celebrates his second goal of the game against Team Europe with teammates on the bench during second period World Cup of Hockey action in Toronto on Wednesday, September 21, 2016. (THE CANADIAN PRESS/Frank Gunn)

NHL commissioner Gary Bettman announced this week there won't be a World Cup of Hockey in February 2021.

Speaking at the league's board of governors meeting in Pebble Beach, Calif., Bettman said there isn't enough time to plan the event.

"We're all in agreement that bringing back the World Cup on a regular basis would be a good thing," Bettman told reporters. "That's something we're having very serious, specific discussions about with the (NHL) Players' Association on."

But when the topic quickly turned to the Olympics -- an international event the NHL has next to no control over at this point compared to a league-run World Cup -- the commissioner was singing a different tune.

"The Olympics is a different issue," Bettman added. "The league's view is it's disruptive to a season. We understand the importance to the players, but there are a whole host of things that are unresolved, including who would pay for participation and what rights we get to promote ourselves.

"That's something that isn't on the same track, in my view, as the World Cup."

The NHL went to the Olympics five times between 1998 to 2014, but skipped the 2018 Games in Pyeongchang, South Korea, and could very well do the same for the 2022 edition in Beijing.

The league ran its most recent World Cup in the fall of 2016 and was hoping to hold another tournament in place of the 2021 all-star game. But with those plans are now shelved, the next opportunity for a best-on-best showcase will be sometime during the 2021-22 campaign.

A number of high-profile NHLers were asked before the season where international play ranks for them in terms of importance.

In short, the consensus was World Cups are nice, but the Olympics are better.

"It's really important for our game to be represented at the Olympics," said Chicago Blackhawks captain Jonathan Toews, who won gold with Canada in both 2010 and 2014. "If you're half-reasonable, everyone can admit the same thing. It's good for our game. The Olympics is a huge, huge stage that the whole world is watching. You saw what it did for our game when the U.S. and Canada met in the final in North America in 2010.

"(I'm) not saying it's always going to work out perfectly like that, but it's always a win for our game."

Detroit Red Wings centre Dylan Larkin said it would be a "dream come true" to play for the U.S. at a Games.

"I take great pride in representing my country," he said. "Watching the 2010 Olympics in Vancouver, that game against Canada gives me chills just talking about it.

"I would do anything to be on that team. It grows the game and a key part of the Olympics are ice hockey when NHL players are part of it. It would be great to continue that trend."

St. Louis Blues sniper Vladimir Tarasenko would have to play under a neutral flag if the NHL goes to the 2022 Games after Russia's recent four-year ban by the World Anti-Doping Agency, but he said back in the fall there's nothing like the Olympics.

"It's really, really important," Tarasenko said. "I think all Russian players want to go there, and I bet you other players from other teams want to go. That's why we're playing, to be one of the best.

"I hope they will make a good decision. (The Olympics are) once in four years. They're talking about the World Cup, (but) they should talk about Olympics more."

The World Cup in 2016 included a Team Europe made up of players from smaller hockey nations and Team North America, which was peppered with the continent's top talent aged 23 and under.

Los Angeles Kings captain Anze Kopitar suited up for Team Europe, which made the final against Canada, but said his experience at the 2014 Games playing for Slovenia was a different level.

"Olympics are Olympics. I'd like to be a part of it again," he said. "If you want to grow the game, being part of the Olympics is a big thing."

After a rough stretch on and off the ice -- one that included the resignation of head coach Bill Peters amid allegations of past racism and abuse of former players -- the Calgary Flames look like a new team. Calgary was on a 1-5-2 stretch when news broke of the initial allegations against Peters. Associate coach Geoff Ward led the team to a victory in its next game, and since being named the club's interim bench boss, the Flames have ripped off six straight wins to climb into third in the Pacific Division ahead of Thursday's visit from the Toronto Maple Leafs.

The Detroit Red Wings are in the midst of what is turning into an historically bad season. Currently sitting with a paltry 17 points through 32 games, the team has lost 12 in a row, with the last 10 defeats coming in regulation. Detroit is on pace to register just 44 points, which would eclipse the 48 accumulated by the Colorado Avalanche in 2016-17 and set a new low bar for the salary cap era.