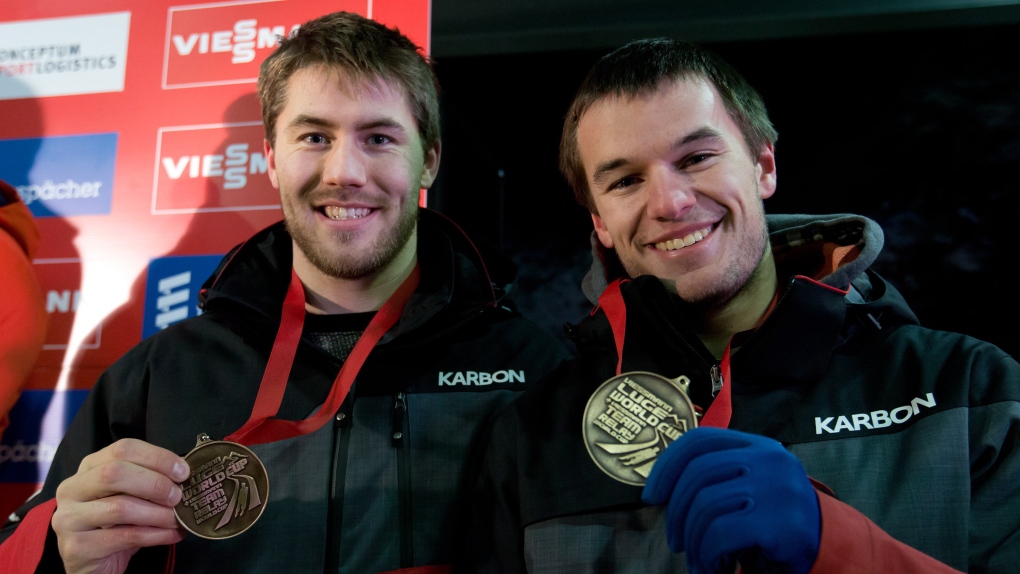 The love of speed Tristan Walker inherited from his air force pilot grandfather came full circle when the luger took to the skies with the Canadian Forces Snowbirds.

Walker and teammate Justin Snith spent almost an hour in the distinctive red and white Tutors on Monday at Canadian Forces Base Comox, where Walker's grandfather Len Bolger flew CF-100s with 409 Squadron.

Walker and Snith compete in men's doubles. The 27-year-olds from Calgary raced the anchor leg for Canada en route to a relay silver medal at the 2018 Winter Olympics in Pyeongchang, South Korea.

Walker secreted his grandfather's Royal Canadian Air Force wings in the arm of his speed suit for all of his Olympic runs in 2010, 2014 and 2018.

Walker and Snith tagged along while the Snowbirds -- Canada's air demonstration squadron since 1971 --logged promotional flights for photos.

"It was one of the best experiences . . . ever," a giddy Walker said afterwards.

"We were in formation the whole time. We didn't do that many aerobatic manoeuvres, but we got to do one high-G, hard loop at the end of it."

Bolger, who died of cancer in 2007 at age 76, was also a test pilot in Cold Lake, Alta., and in California for the Avro Arrow program, according to his obituary.

Walker attributes his affinity for both speed and aviation to his grandfather.

"It had to come from somewhere and that is a pretty good explanation for it," Walker said.

"I absolutely did catch that bug from him. He didn't really talk much about his flying days, but we were always doing airplane or aviation something together. We were building models, flying remote control planes."

A luger can reach speeds up to 140 kilometres per hour on a sled, while the Snowbirds will hit a top speed of almost 600 km/h during a performance.

Thousands of runs down twisting, turning tracks at high velocity forged strong stomachs in Walker and Snith, so air sickness bags were not required.

"The pilots referred to them as our boarding passes and thankfully we didn't need them," Snith said.

"Flying straight level and seeing planes mere feet off the wing tips, I was right at the back of the formation so I had two right in front of me the entire time.

"It was absolutely unreal. It's definitely a once-in-a-life-time experience."

They experienced the so-close disappointment of placing fourth in the 2014 Winter Olympics in women's singles, men's doubles and the relay.

Gough's bronze in women's singles just days before the relay in Pyeongchang was Canada's first Olympic medal in the sport.

Gough and Edney have retired, while Walker and Snith intend to race in Beijing in 2022 and compete in their fourth Olympic Games.

A photo of Walker holding Bolger's wings aloft in the finish area of Pyeongchang's Alpensia Sliding Centre following the relay caught the attention of the RCAF, which posted it on social media.

A connection was made and Walker followed up this past winter.

"It was kind of a Hail Mary. I sent them over direct message on Instagram the picture of me with the wings from the Olympics and said . . . 'I would love to help out in any way I can to promote your new page and, oh, also, I have always wanted to go up with the Snowbirds."'