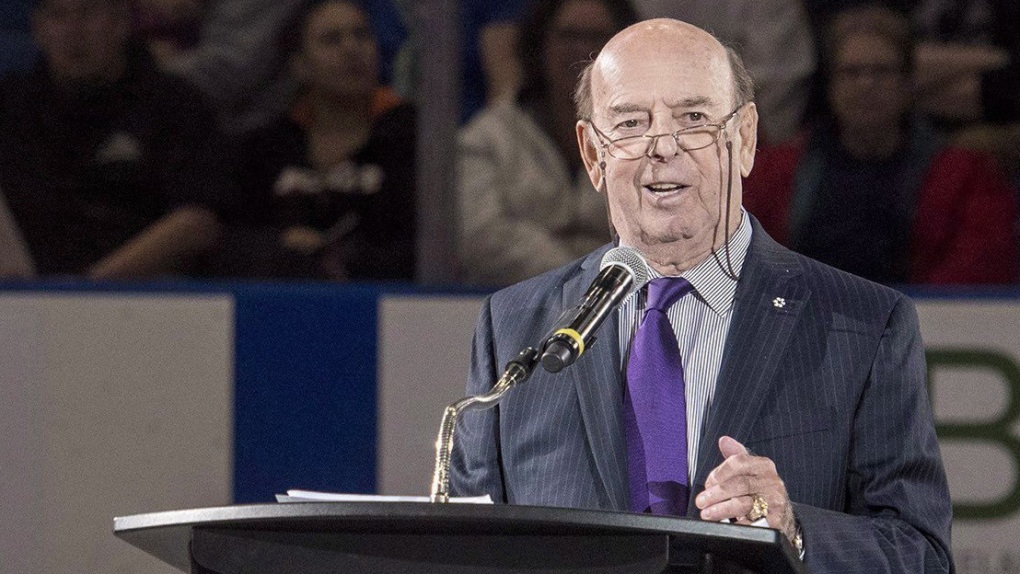 Broadcaster Bob Cole speaks as part of "Thank You, Mr. Hockey Day" remembering Gordie Howe in Saskatoon, Sunday, September 25, 2016. Bob Cole still remembers the butterflies flapping in his stomach as he walked into the old Boston Garden in the spring of 1969. Calling games on "Hockey Night Canada" was a his dream. THE CANADIAN PRESS/Liam Richards

Bob Cole still remembers the butterflies flapping in his stomach as he walked into the old Boston Garden in the spring of 1969.

Calling games for "Hockey Night in Canada" was his dream. This was the opportunity, one he wasn't about to let pass him by.

"Nervous as heck," Cole recalled this week. "It was radio on the CBC network. Playoffs. It was something I always wanted to do. Now you're asked to step up and you're front and centre. If you've never done something like this, it's hard to understand — you really wanted to do it, and here you are given a chance.

"You better do it. It's a crazy world, but I wouldn't trade it for anything."

A half century later, the legendary play-by-play man — the iconic voice millions of viewers in this country associate with hockey — will hang up his microphone after calling Saturday's regular-season finale between the visiting Toronto Maple Leafs and Montreal Canadiens.

Cole knew this moment would eventually come. The timing, though, isn't his choice. That makes it tough.

"Mixed feelings, I guess," the 85-year-old broadcaster continued in an interview from his hometown of St. John's, N.L. "It's starting to sink in. It's hard to get my head around it, you know?

Cole, who moved to TV in 1973, saw his workload scaled back in recent years by Sportsnet and Rogers Media, which took over national television rights in 2013 — a deal that included a sub-licensing agreement to allow the CBC to continue airing HNIC.

He didn't call any playoff games last spring for the first time in his career, and got 16 dates on the 2018-19 schedule.

There will be tributes Saturday on TV and at the Bell Centre in Montreal, but as always, Cole would prefer the focus remains on the ice.

The memorable calls, however, are almost too many to count.

Inducted into the Hockey Hall of Fame in 1996 as a recipient of the Foster Hewitt Memorial Award for broadcasting excellence, his personal highlights include the 1972 Summit Series on radio and the 2002 Olympics in Salt Lake City — "It's going to be a break! It is Jooooooe Sakic ... scores!" — when Canada won gold to snap a 50-year drought.

And then there's his signature phrase, one that nearly every Canadian hockey fan associates with Cole.

"I used that many times, I'm told, at home growing up," said Cole, who got his start with VOCM radio in St. John's. "If you spilled some milk and your mother found out that you've made a mess, it's: 'Oh baby.'"

Players and coaches across the league got to know him over the years, and like the man, have mixed feelings about his exit.

"An unbelievable gentleman," Leafs head coach Mike Babcock said. "If you let him, Bob would probably work another 10 years.

"I'm privileged to call him a friend."

Ottawa Senators interim head coach Marc Crawford was behind the bench for Toronto's farm team in St. John's in the early 1990s.

"He'd always come down to our office and I thought it was such a cool thing," Crawford said. "Little did I know that he was there because it was the only place in the rink he could smoke.

"Didn't matter to me. I was happy to share any moments I could with him."

Leafs centre John Tavares fell in love with his hometown team during Toronto's 1993 playoff run. Cole provided the soundtrack to some of his earliest hockey memories.

"He made the game even more special than what it was," Tavares said. "He brought you into the game, to be a part of it."

"He had a way of calling games that just captivated you," Canadiens winger Brendan Gallagher added.

"A living legend," Stamkos said. "His voice is iconic. It's all I associated with watching hockey growing up. Bittersweet for sure, but a great man.

"He has a close spot in a lot of Canadians' hearts."

Outside the inner circles of the hockey world, Cole has received plenty of support on this final professional journey.

"A lot of people have stopped me at airports," he said. "It's quite humbling when all these people you've never met take time to say hello and talk about how they enjoyed your work."

He hopes he added something to their hockey experience.

"It's always the game," Cole said. "If you enjoyed the game and you had a good time watching the game — and I happened to be working — that's a compliment."

Asked if there's any animosity with how his broadcasting career is coming to an end, Cole said that's not the word he would choose.

"I respect what my superiors are doing," he said. "There's a lot of great talent working on our games now, but of course I'm disappointed. I always wanted to be involved.

But just in case someone changes their mind, his phone number and email address are staying the same — "You never know your luck."

"I have no plans. I hate to even think about plans because I don't have any. It's going to be strange. I'm going to need some help to get through it all."

— With files from Alexis Belanger-Champagne and Lisa Wallace