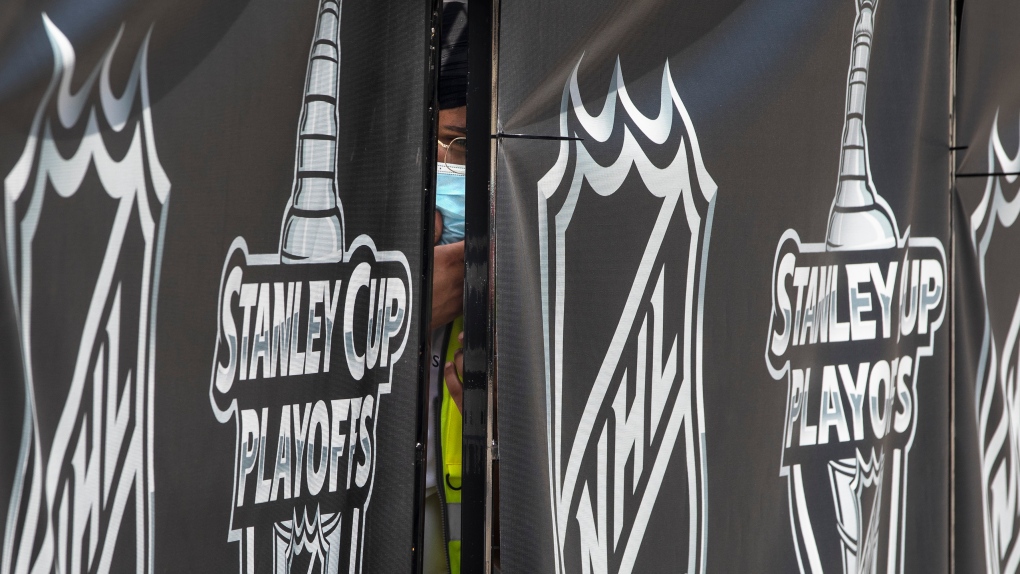 A security guard peers out from behind NHL branded fencing at the entrance where players arrive at Toronto's Royal York hotel, part of the NHL "bubble" in Toronto, Sunday, July 26, 2020. THE CANADIAN PRESS/Chris Young

After an unsettled season that limited opportunities for junior hockey players and NHL scouts alike, Calgary Flames GM Brad Treliving believes it will take some time before the real winners of this year's draft can be picked.

"The reality is now you wait," he said Saturday after Calgary added eight names to its prospect pool. "Everyone's happy on draft day.

"Now you wait for a period of time for these players to go through the development process."

General managers, scouts and players have all said for weeks they expected an unpredictable 2021 NHL entry draft after COVID-19 restrictions cancelled games or entire seasons, and prevented scouts from checking out talent in person.

What the pandemic hasn't changed, though, is talent, Treliving said.

"The good players will always rise to the top and there'll be a lot of people, I think, next year at this time going `Geez, this guy got picked there when he's this type of player."' Treliving said. "So I think it'll be interesting to follow the progression of this draft."

There was ample talent available this weekend, with 223 players from 14 countries and 38 leagues worldwide selected by teams as the NHL held a virtual draft for the second straight year.

The Ottawa Senators were the first Canadian team to pick when the second round began Saturday, selecting Zack Ostapchuk at No. 39 overall.

"Earning that was a huge honour for me," Ostapchuk said from his family's home in St. Albert, Alta., on Saturday. "I think that's a feather in the cap for the hard work I put in the off-season.

"I think I had a lot of time to get bigger and stronger and that really helped me."

The Senators also added Ben Rogers, a defenceman with the OHL's London Knights, with the No. 49 pick. Rogers didn't play last season after the league cancelled its campaign due to the pandemic.

The six-foot-four, 200-pound defenceman admitted he was "definitely a little bit concerned" about how the lack of playing time would impact his draft selection.

"When you're a kid that's my age, you want to go as high as you can," said the native of Brighton, Ont. "But I know I was putting in the work all off-season, or what should have been the season.

"I knew I was putting in the work on the ice and in the gym. So I knew wherever I went in the draft, I would work my hardest and prove myself."

Roger said he added 35 pounds to his frame over the past year through twice-a-day workouts and "lots of good food" -- especially chicken parmigiana.

Ottawa took right-winger Tyler Boucher with the 10th overall pick in the first round Friday. On Saturday, the Senators added left-winger Oliver Johansson (No. 74), right-winger Carson Latimer (No. 123) and defenceman Chandler Romeo (No. 202).

The Vancouver Canucks made their first selection of the draft Saturday, adding six-foot-two, 202-pound Belarusian right-winger Danila Klimovich with the No. 41 choice. Ron Delorme, the team's chief amateur scout, announced the pick on behalf of residential school survivors.

Vancouver dealt its first-round selection to the Arizona Coyotes in a blockbuster trade Friday. The Coyotes received the No. 9 pick, forwards Jay Beagle, Loui Eriksson and Antoine Roussel, and picks in the 2022 and 2023 drafts. In exchange, the Canucks got right-winger Conor Garland and veteran defenceman Oliver Ekman-Larsson.

The Winnipeg Jets picked five-foot-10, 170-pound right-winger Nikita Chibrikov with the 50th overall selection. Chibrikov came into the draft the No. 4-ranked international skater and captained the Russian team that won silver at the U-18 world hockey championship this year.

Winnipeg picked up centre Chaz Lucius in the first round (No. 18) before selecting defenceman Dmitry Kuzmin (No. 82) and right-winger Dmitri Rashevsky (No. 146) on Saturday.

"We liked our draft. We didn't have a lot of swings with the bat," said Jets general manager Kevin Cheveldayoff.

"It's just the type of player and the type of people that we drafted. I think they're pretty driven individuals. They all have skill, they all have good hockey sense, they all skate pretty well. So you kind of hope that gives you that depth in that prospect pool that someday you can graduate to the National Hockey League."

The Toronto Maple Leafs made their first selection of the draft midway through the second round Saturday, taking left-winger Matthew Knies 57th overall. The six-foot-two, 210-pound Phoenix native had 42 points (17 goals, 25 assists) in 44 games with the USHL's Tri-City Storm last season.

Riley Kidney of the Quebec Junior Hockey League's Acadie-Bathurst Titan joined the Montreal Canadiens prospect pool at the end of the second round, No. 63 overall. The five-foot-11, 168-pound centre said being drafted was "a dream come true.

"It kind of feels surreal right now. My phone's blowing up," he said, silencing a call. "Words can't describe how I feel right now."

The Habs made a controversial decision Friday to select Logan Mailloux with the 31st overall pick. That came after the defenceman posted a statement on social media earlier this week asking teams not to draft him after news surfaced that he had been charged and paid a fine in Sweden for distributing a sexual photo without consent.

The Oilers picked centre Xavier Bourgault with the 22nd overall pick Friday. Edmonton had to wait to make another selection, but eventually chose defencemen Luca Munzenberger (No. 90) and Maximus Wanner (No. 212), centre Jake Chiasson (No. 116) and left-wingers Matvey Petrov (No. 180) and Shane Lachance (No. 186).

This report by The Canadian Press was first published July 24, 2021.