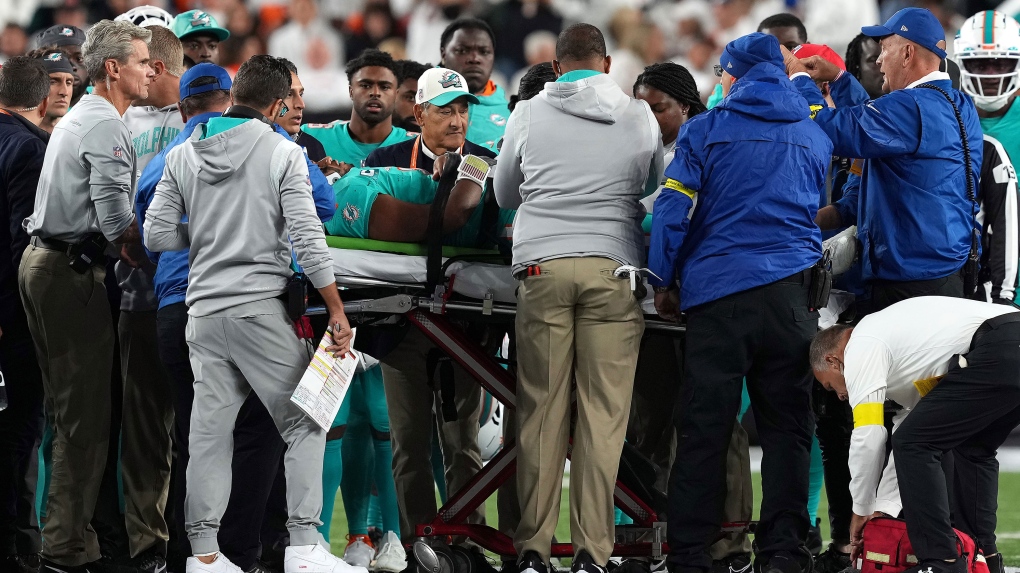 Medical staff tend to Tagovailoa as he is carted off on a stretcher after an injury during the second quarter of the game against the Bengals. (Dylan Buell/Getty Images via CNN)

It's been a turbulent fortnight for the NFL and its concussion protocols, with the league coming under intense scrutiny over the issue of players' health.

The saga around Miami Dolphins quarterback Tua Tagovailoa, which ended in him being taken to the hospital after suffering a concussion in a scary looking incident, has raised a number of questions about the handling of head injuries.

An investigation is now underway into the handling of Tagovailoa's apparent head injury, while the unaffiliated neurotrauma consultant who was involved in the quarterback's first concussion evaluation is reportedly no longer working with the National Football League Players Association (NFLPA).

THE BEGINNING OF THE SCRUTINY

It all began on Sunday, September 25, in the Dolphins' 21-19 win over the Buffalo Bills.

Tagovailoa was knocked out of the game briefly in the second quarter after a hit by Bills linebacker Matt Milano forced the back of the Dolphins QB's helmet to hit the turf.

The 24-year-old quarterback got up stumbling and was taken to the locker room for a concussion check. Milano was flagged for a roughing the passer penalty.

The Dolphins initially announced Tagovailoa was questionable to return to the game with a head injury, but he came back out onto the field in the third quarter and finished the game throwing for 186 yards and a touchdown.

Tagovailoa told reporters after the game that he fell onto his back before his head hit the turf causing his back to lock up and the resulting stumble. He added that he was evaluated for a concussion but was ultimately cleared.

Dolphins head coach Mike McDaniel alluded to a back injury after the game, saying that Tagovailoa back got "bent" on an earlier play but the hit "loosened his back" causing his legs to get wobbly. McDaniel added that Tagovailoa told him that his back was like "Gumby" -- a reference to the classic green animated character.

Then, just four days later, Tagovailoa took to the field as the Dolphins played the Cincinnati Bengals on Thursday Night Football.

Tagovailoa was sacked by Bengals defensive lineman Josh Tupou in the second quarter and laid motionless on the field for several minutes.

The entire Dolphins sideline walked onto the field as he was placed on a backboard and stretcher. Bengals fans in attendance at Paycor Stadium in Cincinnati showed their respect as Tagovailoa was carted off the field.

Video showed Tagovailoa's forearms were flexed and his fingers contorted -- a sign that Gupta, a neurosurgeon, said is a "fencing response" and can be linked to a brain injury. Gupta asked Sills, who is also a neurosurgeon, how concerned he was after seeing that video.

"Well, of course, I am concerned just like you as a neurosurgeon, and anyone with a significant injury and neurologic signs like that," Sills said.

"I am concerned about that injury and all of the injuries."

Tagovailoa was cleared to return to Miami after visiting the hospital, and McDaniel told reporters on Friday that his quarterback was in "good spirits."

But Chris Nowinski, who is co-founder and CEO of the Concussion Legacy Foundation, has told the NFL it must "do better."

"This is bigger than protocols," tweeted Nowinski. "A concussion can change a life. For me, it's personal. We can't let any other children grow up without their fathers." CNN has offered the NFL the right of reply to Nowinski's tweet.

Minnesota Vikings wide receiver Adam Thielen said the league has a duty to "protect" quarterbacks when they're hit on their head.

"Obviously, those definitely have to be called because we got to protect our quarterbacks in this league," Thielen said when asked about hits to Vikings quarterback Kirk Cousins' helmet. "They're huge and very important to the success of this league and to these teams, having a good product on the field. Got to protect those guys."

The NFL and the NFLPA released a joint statement saying that both sides agreed that updates to the protocols are required, in particular to "gross motor instability" incidents.

Sills told Gupta that the ongoing review includes the players, the NFL and the NFLPA, as well as trainers, physicians and independent experts.

"We'll be very transparent and very open about what we learned from that and exactly what the sequence of events are," added Sills.

Gupta noted on Sunday that Tagovailoa had trouble walking after his helmet hit the turf in the game against the Bills -- a potential "no-go" sign, meaning a player should not and would not return to the field.

Sills said that such "gross motor instability" is a "no-go" sign if it's determined to be from a neurological cause.

The Bills hit is still under review, he said, and "that's very hard to judge from video alone." Sills emphasized that the decision about whether a player can return to a game is never made by one person but rather a group of physicians, including an independent neurological expert.

On Sunday, two quarterbacks left games as a result of the concussion protocol: Tyrod Taylor of the New York Giants and the New England Patriots' Brian Hoyer.

Baltimore Ravens head coach John Harbaugh has called the events "astonishing" while NFLPA president JC Tretter said he was "outraged" at what happened.

"Until we have an objective and validated method of diagnosing brain injury, we have to do everything possible, including amending the protocols, to further reduce the potential of human error," JC Tretter said in a statement on Twitter.

"A failure in medical judgement is a failure of the protocols when it comes to the well being of our players."

WHAT IS THE NFL'S CONCUSSION PROTOCOL?

A player goes into the concussion protocol if they have received a blow to the head and exhibits or reports symptoms or signs suggestive of a concussion or stinger (a nerve pinch injury) or the team athletic trainer, booth ATC spotter, team physician, game official, coach, teammate, sideline Unaffiliated Neurotrauma Consultant (UNC) or booth UNC initiates the protocol.

The player is removed to sideline or stabilized on the field and undergoes testing.

The team physician and the UNC perform a sideline survey which includes evaluating things such as "no-go" signs (loss of consciousness, gross motor instability, confusion, amnesia), history of event, concussion signs/symptoms, video review as well as a focused neurological exam including a cervical spine exam, evaluation of speech, observation of gait and eye movements and pupillary exam.

If any element of testing is deemed positive, inconclusive or suspicious of concussion, the player is escorted to the locker room for further evaluation which includes full NFL SCAT and a complete neurological exam.

If abnormal, the player is not permitted to return to play and remains in the locker room where they are periodically evaluated by the medical team.

Every NFL player diagnosed with a concussion must follow a five-step process before being cleared to fully practice or participate in a game.

WHY ARE CONCUSSIONS IMPORTANT IN THE NFL?

Concussions and their prevention have become an important issue in recent years due to their connection to brain disease later in life.

In 2017, a study published in the medical journal JAMA (Journal of the American Medical Association) found that chronic traumatic encephalopathy, known as CTE, was found in 99% of deceased NFL players' brains that were donated to scientific research.

The neurodegenerative brain disease can be found in individuals who have been exposed to repeated head trauma. The disease is pathologically marked by a buildup of abnormal tau protein in the brain that can disable neuropathways and lead to a variety of clinical symptoms. These include memory loss, confusion, impaired judgment, aggression, depression, anxiety, impulse control issues and sometimes suicidal behavior.

It can only be formally diagnosed with an autopsy, and most cases, although not all, have been seen in either veterans or people who played contact sports, particularly American football.

A 2018 study found that CTE can start early and without any signs of concussion. Dr. Lee Goldstein, one of the authors on the study published in the journal Brain, and his colleagues from Boston University evaluated the brains of four deceased athletes, ages 17 and 18 years old. All four had died within a day to four months of receiving some sort of sport-related head injury and had a history of playing football.

Earlier this year, former NFL player Demaryius Thomas died suddenly at the age of 33. Months after, Thomas' family said he had been suffering from stage 2 CTE when he died.

Also in recent years, Vincent Jackson, who died aged 38, and Phillip Adams -- who fatally shot six people before taking his own life -- were both posthumously diagnosed with CTE.

A study in 2021 also found that NFL players are about four times more likely to die of amyotrophic lateral sclerosis (ALS), also known as Lou Gehrig's disease, than the general public.

ALS is a neurodegenerative disease more likely to be diagnosed in older White men. The root causes are still unknown, and most cases are considered sporadic.

The researchers hypothesized about a relationship between head trauma and ALS because of a similar link detected between football and the neurodegenerative disease CTE. Previous research has noted that CTE and ALS may have some similar impacts on the brain.