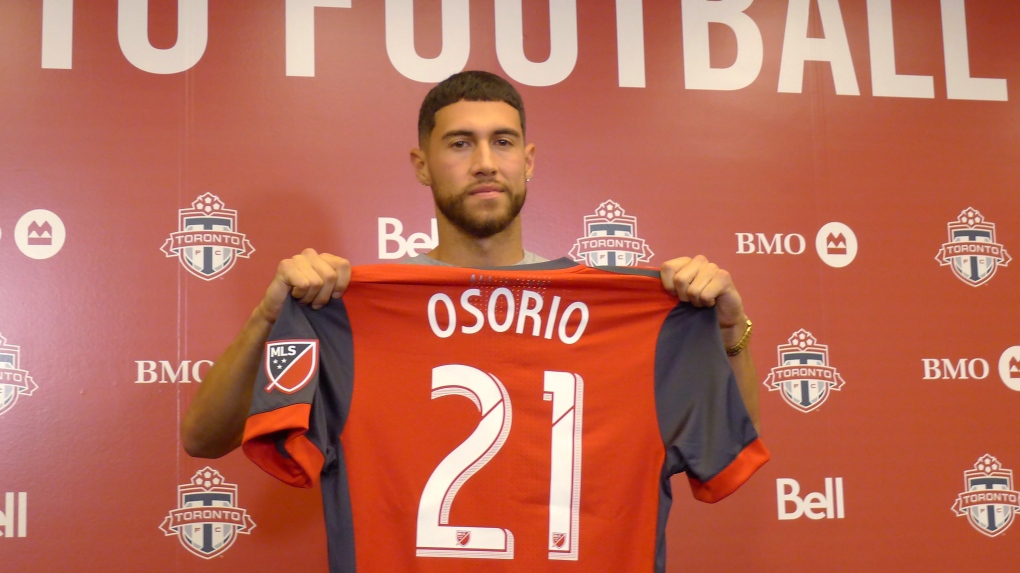 TORONTO -- Jonathan Osorio, enjoying a career year, has elected to stay with Toronto FC rather than test the waters outside Major League Soccer.

The 26-year-old midfielder from Brampton, Ont., signed a new long-term deal with Toronto, that will make him "one of the highest-paid Canadian players in the world," according to team president Bill Manning. His existing contract expires at the end of the 2018 season.

For TFC, it's another key player kept in the fold. No. 1 goalkeeper Alex Bono signed a new deal in June and the team has also awarded Victor Vazquez, Chris Mavinga, Justin Morrow and Eriq Zavaleta with new deals this year.

Osorio, rested in Wednesday's night 2-0 loss in Portland, has been arguably the team MVP this season with 16 goals in all competitions. The club's all-time leader in matches played, he has made 202 appearances across all competitions with 33 goals and 27 assists.

But at US$209,825, he ranked 13th on the 2018 Toronto payroll (14th if you count Ager Aketxe who is currently on loan in his native Spain), according to the MLS Players Association.

Orlando's Will Johnson -- a 12-year MLS veteran -- is currently the highest-paid Canadian in Major League Soccer at US$470,000. Osorio's new deal, which kicks in next season, beats that "by a good margin," according to a source.

TFC used targeted allocation money to sign Osorio, meaning his deal is more than the league's maximum salary budget charge of $504,375. He is not quite at the million-dollar mark but has the potential to get there, according to a source.

Manning said the deal was four months in the making.

"Week after week as Jonathan performed this season, (GM) Tim (Bezbatchenko) and I kept looking at each other and saying 'We can't let this guy go,"' Manning said. "Jonathan had other opportunities out there and we're very appreciate that he stayed with us."

After averaging 25 starts during the 2014, '15 and '16 seasons, Osorio dropped to just nine during the 2017 regular season as Toronto played a 3-5-2 system with wingbacks that essentially had he, Marky Delgado and others competing for the one spot in a three-man midfield that didn't belong to captain Michael Bradley or Vazquez.

Osorio kept at it and won his spot back. Often his harshest critic, he got help from the team on how not to let disappointment or setbacks weigh on him after games.

This year Toronto brought in Aketxe but the Spanish midfielder with the $1.295-million salary couldn't dislodge Osorio.

"If we had a team full of Jonathan Osorios, we would be in a good place no matter what," added coach Greg Vanney. "He just shows up to work every day. He gives us everything he has every day whether it's training, whether it's soccer tennis ... he's always playing to win."

Osorio marked his 200th game in all competitions with TFC on Aug. 15 in Toronto's 5-2 second-leg win over the Vancouver Whitecaps in the Canadian Championship final. Toronto won 7-4 on aggregate to raise the Voyageurs Trophy for a seventh time with Osorio awarded the George Gross Memorial Trophy as tournament MVP after scoring three goals in four games.

Osorio also won the Golden Boot award as top scorer in the CONCACAF Champions League this year with four goals.

In league play this season, Osorio is second in team scoring with nine goals and third in assists with five. He has played 1,983 minutes, second only to captain Michael Bradley's 2,137.

Osorio's future had been the subject of speculation this season. He said he just tried to focus on the season and not think about where he might end up. Most of the time he said he didn't know.

"I wanted to stay here. I've always had dreams to go abroad but I saw a challenge here too," he said.

"People always say that you have to go away to get better but I think I'm getting better here," he added. "I have all the resources to become the best player I could possibly be here at Toronto FC."

The quick-footed midfielder has a talent for getting himself in the right place at the right time, with the vision and acceleration required to get there. He has also forged a profitable rapport with Italian striker Sebastian Giovinco. He can also be a terrier-like defender.

On the international front, he has 20 caps for his country. National team coach John Herdman calls him a "critical player" for Canada.

Osorio credits time as a teenager at Club Nacional in Montevideo, Uruguay, for helping harden him -- and further his passion for the sport.

He spent two years in Uruguay, starting in the under-19 ranks before making his way into the reserves before deciding to return home at the end of 2011. That led to an invitation from the TFC academy in September 2012.

Former manager Ryan Nelsen liked what he saw of Osorio at training camp in 2013 and the young midfielder earned a first-team place.