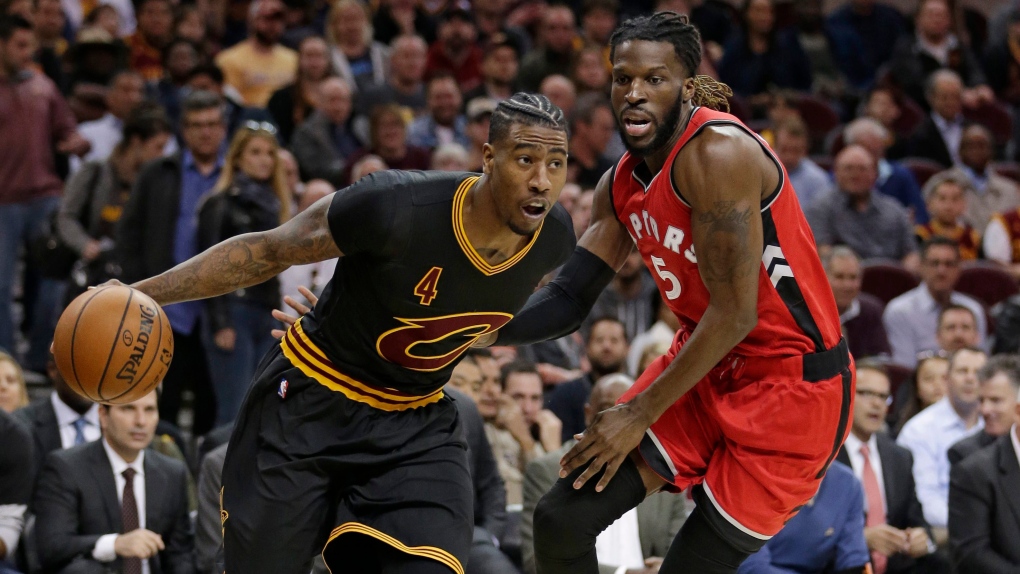 CLEVELAND -- Jonas Valanciunas made his first career 3-pointer and the Toronto Raptors closed the regular season with a 98-83 win on Wednesday night over the Cleveland Cavaliers, who didn't play their "Big 3" All-Stars so they're playoff ready.

Norman Powell scored 25 points as the Raptors beat the Cavs for the first time in four tries this season and gave the defending champions something to think about if they meet in the post-season. Cleveland took Toronto down in six games in last year's Eastern Conference finals.

Although there was still a chance to secure the No. 1 seed in the East, the Cavs put more value on rest and sat LeBron James, Kyrie Irving and Kevin Love. Cleveland fell to 0-4 in games this season without the trio and 0-8 minus James.

The Cavs did get forward Tristan Thompson back after he missed four games with a sprained right thumb. Wearing a brace that he'll sport in the playoffs, Thompson scored 10 points in 18 minutes.

BOSTON - Gerald Green scored 18 points, 10 of them in a 25-2 fourth-quarter run, and the Boston Celtics beat the resting Milwaukee Bucks 112-94 in the regular-season finale on Wednesday night to claim the No. 1 seed in the Eastern Conference playoffs.

The Celtics were assured of home-court advantage through the conference finals when Cleveland lost to Toronto minutes before the game ended.

Despite playing without star Giannis Antetokounmpo and two other starters, the Bucks led by as many as 13 points before Boston ran off 14 of the last 16 points in the first half. Isaiah Thomas, who was scoreless until then, had 10 of them, including eight straight.

Thomas finished with 13 points and eight assists, but he went to the bench with late in the third quarter and sat out the fourth as the Celtics backups pulled away.

CHICAGO - Jimmy Butler scored 25 points, and the Bulls beat the depleted Nets in the regular-season finale to clinch an Eastern Conference playoff spot.

Paul Zipser added a career-high 21 points off the bench as Chicago took advantage of a short-handed Brooklyn lineup to secure its first playoff appearance under coach Fred Hoiberg.

On Tuesday, the Nets, owners of the worst record in the league, announced Trevor Booker, Jeremy Lin and Brook Lopez would be out due to rest, while Quincy Acy (ankle), Joe Harris (shoulder) and Sean Kilpatrick (hamstring) because of injuries.

MIAMI - Goran Dragic scored 28 points, Hassan Whiteside added 24 points and 18 rebounds, and the Heat defeated the Wizards while being eliminated from the NBA playoffs.

Miami needed a win, and either a loss by Indiana or Chicago, to reach the post-season. But Indiana downed Atlanta to clinch the No. 7 seed, and Chicago topped Brooklyn to grab the No. 8 spot.

The Wizards played without starters John Wall, Bradley Beal and Markieff Morris, all resting up for Game 1 of their first-round series against Atlanta this weekend.

Washington started the season 2-8, and ended up with the No. 4 seed in the East.

The Pacers completed the regular season on a five-game winning streak to earn the Eastern Conference's No. 7 seed. They will face Cleveland in the opening round.

Indiana took advantage of the backups by pulling out to a 22-15 lead after one quarter and starting the third quarter on a 9-2 run to turn a seven-point into a 59-45 cushion. The Hawks never seriously challenged again.

NEW YORK - Carmelo Anthony scored 17 points after deciding to play in what could be his final game with the Knicks, and New York beat the 76ers.

Anthony had missed the previous two games with a sore left knee and wasn't expected to play Wednesday, but told Jeff Hornacek he wanted to go. He played 23 minutes, sitting out the final quarter while a couple of “We want Melo! We want Melo!” chants broke out.

The Knicks finished 31-51 in another dysfunctional and disappointing season that started with promise, but became a sideshow after a disconnect between team president Phil Jackson and Anthony led to trade rumours that engulfed the team.

HOUSTON - James Harden had his 22nd triple-double with 27 points, 10 rebounds and 12 assists to help the Rockets wrap up the regular season with a victory over the Timberwolves.

The Rockets had a 12-point lead after a 3-point play by Patrick Beverley with about nine minutes left. Minnesota cut into the lead with a 6-2 spurt before Houston got consecutive 3-pointers from Harden and Eric Gordon to extend the lead to 113-99 midway through the quarter.

Harden, who also had four steals and a block, found Clint Capela on an alley-oop dunk after that, before hitting another 3-pointer to make it 118-99 and spur Timberwolves coach Tom Thibodeau to call a timeout.

MEMPHIS, Tenn. - Nicolas Brussino and Devin Harris each scored 15 points and the Mavericks snapped a five-game losing streak with a victory over the Grizzlies.

Memphis, the seventh seed in the Western Conference, was led by Mike Conley and Zach Randolph, who scored 15 points each. Marc Gasol added 13 points.

OKLAHOMA CITY - Russell Westbrook got an MVP endorsement from Oscar Robertson before the game. The Thunder guard only played the first half of Oklahoma City's loss to Denver.

Westbrook broke Robertson's single-season record for triple-doubles by getting his 42nd on Sunday against Denver. Robertson endorsed Westbrook for the Most Valuable Player award during a pregame ceremony on Wednesday.

He was on pace for another triple-double at halftime with eight assists, five points and five rebounds in 18 minutes before coach Billy Donovan decided to rest him for the second half.

Nikola Jokic finished with 29 points, 16 rebounds and eight assists for the Nuggets, who beat the Thunder for the first time in four tries this season.

Jerami Grant and Taj Gibson each scored 13 points for the Thunder, who will play the Houston Rockets in the playoffs.

ORLANDO, Fla. - Aaron Gordon had 32 points and 12 rebounds, Elfrid Payton scored 21 points and the Magic overcame a late-run by Detroit to win their season-finale.

The Magic, who led by as many as 21 points in the first quarter, allowed the Pistons to surge ahead in the fourth quarter in a game matching two non-playoff teams. But Orlando made enough plays behind Payton and Gordon to avoid yet another disheartening loss as the season closed.

Kentavious Caldwell-Pope and Ish Smith both scored 20 points each to lead Detroit.

In game in which both teams played many of their reserves major minutes, the Pistons outscored Orlando in the second, third and fourth quarters but their 21-point first-quarter deficit proved difficult to overcome.

SALT LAKE CITY - Gordon Hayward scored 14 and the Utah Jazz held on for a 101-97 win over the San Antonio Spurs on Wednesday night.

Utah will face the Clippers in the opening round of the playoffs. Los Angeles earned the four-seed and has homecourt.

The win was a season-best ninth straight at home, the longest streak for the Jazz since 2012.

Hayward was an efficient 7 for 9 from the field while Rudy Gobert, George Hill and Shelvin Mack all finished with 13 for the Jazz.

LOS ANGELES - DeAndre Jordan had 18 points and 17 rebounds, and the Clippers defeated the Kings to clinch the No. 4 seed in the West and home-court advantage in the playoffs.

The Clippers and Utah Jazz will meet in the first round starting this weekend. The teams finished with similar 51-31 records, but the Clippers held the tiebreaker, having won the season series 3-1.

Los Angeles heads into the playoffs with momentum, having won seven in a row for the NBA's longest active streak.

J.J. Redick added 18 points for the Clippers, who needed a victory to gain home court after the Jazz beat San Antonio earlier in the evening. All five starters scored in double figures for Los Angeles.

OAKLAND, Calif. - Kevin Durant had 29 points, eight rebounds and five assists in his final playoff tuneup, and the Warriors beat the Lakers in both teams' final regular-season game.

Stephen Curry added 20 points, eight assists and five rebounds for the playoff-bound, top-seeded Warriors (67-15), ready for what they're counting on being another deep post-season run.

A day after a fierce and fun 3-point shootout following practice, Durant said before the game he hoped to have found his shooting touch after recently missing 19 games with a left knee injury. KD shot 11 for 16 and made 5 of 7 3s, while Curry also hit five from deep.

PORTLAND, Ore. - Jordan Crawford had 15 points and the Pelicans snapped a five-game losing streak with a victory over the playoff-bound Trail Blazers.

Cheick Diallo had 12 points and 16 rebounds for the Pelicans, who finished 34-48 and out of the playoffs for the second straight season.

Shabazz Napier had 25 points for Portland in the loss, which snapped a three-game winning streak. The Blazers, who will face Golden State in the opening round of the playoffs, rested starters Damian Lillard and CJ McCollum.

The Pelicans pulled ahead 94-93 on Diallo's layup with 4:01 left, then stretched the lead on Crawford's jumper and a 3-pointer.

Quinn Cook made a pair of free throws for New Orleans before Tim Quarterman missed a pair for Portland on the other end to end it.