Morikawa clutch in finish and playoff to win Workday Open 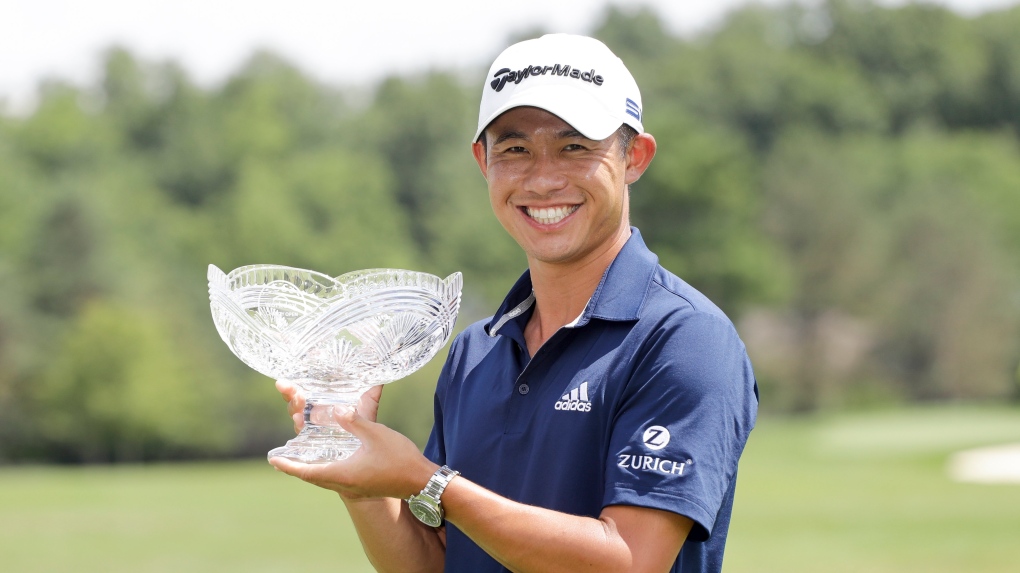 DUBLIN, OHIO -- Collin Morikawa figured his tournament was over if he didn't make a 5-foot par putt on the 15th hole at Muirfield Village.

He couldn't have imagined all the fun was just starting.

Still three shots behind Justin Thomas with three holes to play, Morikawa made only one birdie and it was enough for a 6-under 66 to force a playoff.

The three times he played the 18th hole, he twice could only watch as Thomas had 10-foot putts for the win.

The other time, Morikawa had to make a 25-foot putt to keep playing.

The only dull moment Sunday at the Workday Charity Open was the end, when Morikawa took two putts for par from just inside 10 feet to beat Thomas on the third playoff hole and win for the second time in his career.

"Amazing," Morikawa said when asked how he would sum up the day to someone who only saw the result.

That covered a lot of territory.

Morikawa never looked like the winner until it was over.

Thomas had 10 straight one-putt greens, the last one a 25-foot eagle putt on the par-5 15th for the three-shot lead with three holes to play. And while he made two bogeys for a 69 that allowed for a playoff, he had reason to think it was over when he made a 50-foot birdie putt from the back of the 18th green.

"I never assumed it was over," Thomas said. "Percentages would say that it heavily is close to being that way. ... I just tried to keep my head down and think he's going to make it, but hoping he's not, selfishly, but he did."

Roger Sloan of Merritt, B.C., was the top Canadian, finishing in a tie for 27th at 7 under, 12 off the pace. Adam Hadwin of Abbotsford, B.C., tied for 35th at 5 under, Corey Conners of Listowel, Ont., tied for 39th at 4 under, and Abbotsford's Nick Taylor and Mackenzie Hughes of Dundas, Ont., tied for 48th at 3 under.

Thomas missed a 10-footer for par in regulation, and a putt close to that same line for birdie on the second extra hole. He was done in by a tee shot on No. 10 that wound up in the rough behind a tree, forcing him to pitch out 102 yards short of the green. He missed his 15-foot par putt, leading to Morikawa's two-putt par and the win.

It was a wild ride for Thomas, too. He started with a two-shot lead, trailed by three after just five holes, made four straight birdies and was ahead by three shots 10 holes later, and ultimately lost in a playoff.

"It's completely unacceptable to give up a three-shot lead with three to go," Thomas said. "I'm upset, I'm disappointed in myself. But at the end of the day it's over with now, and I just need to take some time this afternoon and tonight to build on it and figure out what I can do better going into next week."

They return in four days for the Memorial on a Muirfield Village course expected to be as fast as a U.S. Open.

This was a big win for the 23-year-old Morikawa, who in his 13 months since graduating from Cal already has established a reputation for a high level of consistency. His only victory was at an opposite-field event last summer. He beat a field at the Workday Charity Open that featured five of the top 10 in the world.

"This is a huge kind of stepping stone," said Morikawa, who goes to No. 13 in the world, one spot ahead of Tiger Woods. "We got No. 1 out of the way. We got No. 2. Let the gates just open and let's keep going."

It was his second playoff since the PGA Tour returned June 11 from the COVID-19 pandemic. Morikawa lost on the first extra hole at Colonial by missing a 3-foot putt. He had a 2-foot putt in regulation on Sunday that caught the left edge of the cup and swirled in. "My heartbeat must have skipped a billion times," he said.

The only thing missing was a handshake from Jack Nicklaus. He'll be there next week for the Memorial, as the PGA Tour stays at Muirfield Village.

Viktor Hovland of Norway had a 71 and finished alone in third. He was in the final group of three young stars, all of whom had the lead at some point during the final round.

Hovland's hopes ended with two shots -- finding a bunker from the 10th fairway for bogey, and a driver on the reachable 14 that only missed by about 5 feet, enough to slowly tumble down the bank and into the water.

Morikawa also hit driver on the 14th that rolled 12 feet away. He narrowly missed the eagle putt, while Thomas hit a splendid wedge with side spin to 3 feet for birdie to stay one ahead. That's when it appeared the tournament turned in Thomas' favour.

Morikawa was in thick rough right of the fairway on the par-5 15th, unsure he could get over the slope to the next section of fairway. It came out heavy, just through the fairway into light rough 190 yards away. By then, Thomas hit 3-wood to 25 feet. Morikawa went through a bunker to the steep slope by the green, and did well to chop that chip high in the air to 5 feet. Thomas made his eagle putt. Morikawa made his par to stay alive.

"A three-shot cushion with three to go is a lot different than four with three to go," Morikawa said. "And then him hitting somewhat of a poor tee shot on 16, I knew this was my window of opportunity."

Thomas missed a 10-foot par putt. Morikawa caught a good bounce with an ordinary 8-iron to the 17th and made a 10-foot birdie. Thomas found the fairway bunker off the tee at the 18th, played short of the green and couldn't make his par.

The starting times were moved up to avoid a forecast of thunderstorms, so the final round was broadcast on a delay, available live only on streaming.

With no fans on the course, it was the wildest finish that hardly anyone saw.