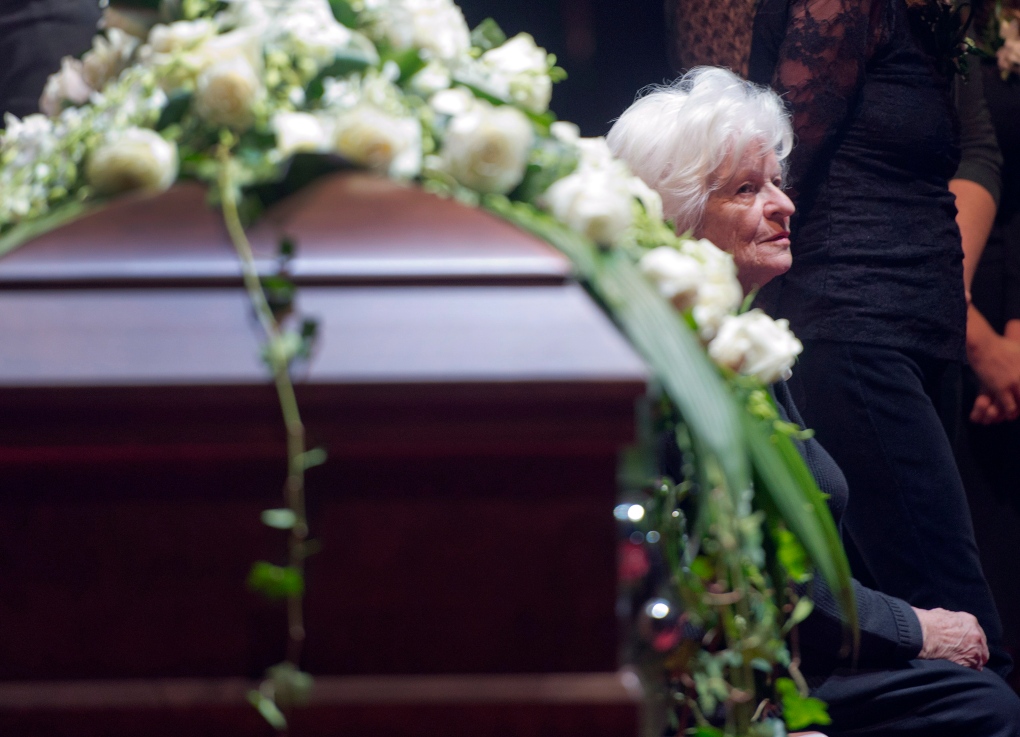 Elise Beliveau sits by the casket of her husband, Jean, during the visitation at the Bell Centre on Monday, Dec. 8, 2014 in Montreal. (Ryan Remiorz / THE CANADIAN PRESS)

MONTREAL -- The Bell Centre crowd stood and cheered for several minutes Tuesday night after a moving tribute to legendary captain Jean Beliveau ahead of the Montreal Canadiens game against the Vancouver Canucks.

A 15-minute pre-game ceremony in honour of Beliveau, one of the team's iconic players and personalities who died last week at 83, caused his widow Elise Couture Beliveau to alternately weep, pray and thrust out her arms in thanks to the crowd.

The scoreboard screen was focused through the ovation on her, standing at her seat beside her daughter Helene and granddaughters Magalie and Mylene.

A chronology of his life and hockey career in pictures was shown on the screen, and another video tribute was shown after players from both teams went onto the ice and lined up inside the blue-lines.

Then a long moment of silence was followed by an even longer ovation for Beliveau, who won 10 Stanley Cups and served 10 years as captain of the Canadiens in a 20-year career from 1950 to 1971.

He was part of the Canadiens administration for another seven Cup victories.

The seat beside his widow-- three rows behind the Canadiens bench where Beliveau sat for nearly every home game-- was left vacant, with his number four on it.

The number four was also painted on the ice behind both nets.

The Canadiens were on a road trip when Beliveau died last week, so remembrance ceremonies were held up until they got back.

Thousands of fans as well from the past and current Canadiens teams took part in two days of public visitations at the Bell Centre, where Beliveau's closed casket was on display at centre ice.

His wife greeted every visitor.

A funeral mass is scheduled for Wednesday afternoon at Mary Queen of the World cathedral near the Bell Centre. Several stars of past Canadiens teams will take part in the proceedings.

You can watch the video tribute shown at the game here: