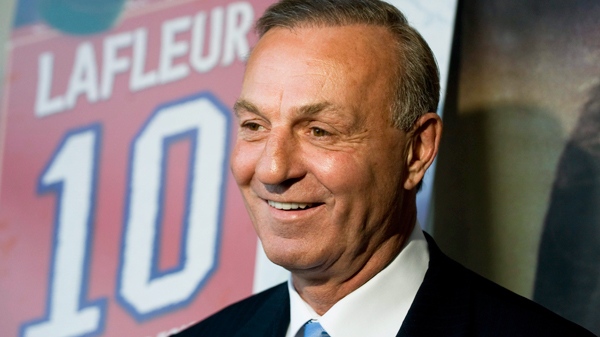 Hockey legend Guy Lafleur speaks to the media at the official launch of a DVD on his life "IL Etait Une Fois...Guy Lafleur" in Montreal Monday, Nov., 2, 2009. (Graham Hughes / THE CANADIAN PRESS)

"This procedure was necessary after a routine examination detected a cardiac issue," the Canadiens said in a statement. "The operation was successful, and doctors predict a full recovery after several months of convalescence. The family wishes to thank the entire medical team, as well as the personnel at the CHUM, and will not issue any further comment."

Lafleur spent the first 14 years with the Canadiens, followed by a three-year retirement. He then played with the New York Rangers for one season and the Quebec Nordiques for two.

Most of those three seasons were spent after he already was inducted into the Hockey Hall of Fame in 1988.

Lafleur became the first player in NHL history to score at least 50 goals and 100 points in six consecutive seasons.

He holds the record for most points as a Canadien and helped the club win the Stanley Cup five times.