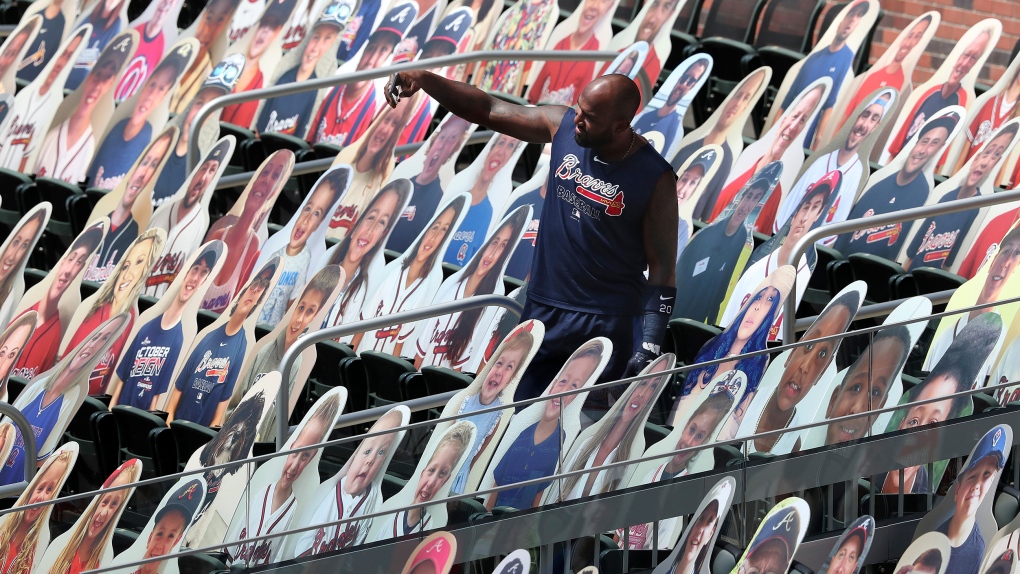 Atlanta Braves outfielder Marcell Ozuna takes a selfie with cutouts of his wife Genesis Guzman and their 3 children in the stands filled with cutout fans behind the Braves dugout before playing the New York Mets in a MLB baseball game on Sunday, Aug. 2, 2020 in Atlanta. (Curtis Compton/Atlanta Journal-Constitution via AP)

The Detroit Tigers and Cincinnati Reds were the first teams to try out baseball's new time-saving measure -- a doubleheader with seven-inning games.

They ended up having a long day anyway after the opener was delayed over two hours because of rain.

It's been that kind of season so far for Major League Baseball. Last month, the New York Yankees and Washington Nationals opened this abbreviated schedule with a game that was shortened because of rain. That set the tone for a chaotic couple of weeks in which the coronavirus has wreaked havoc with the schedule -- and the weather hasn't always co-operated either.

Already, there are questions about whether teams can realistically play the 60 games originally slated for them -- and how they might try to come as close as possible.

"We're just going on whatever they tell us to do, and trying to stay healthy here, and play the games that are put in front of us," Tigers manager Ron Gardenhire said before the first of Sunday's two games.

By the end of the night Sunday, 12 teams had played 10 games, but six had played seven or fewer. The Miami Marlins (2-1) made it through just three before a virus outbreak sidelined them. The Philadelphia Phillies (1-2) played those three games against the Marlins and were shut down as well. The St. Louis Cardinals (2-3) have had positive tests, and their series with Milwaukee (3-3) was called off.

The shortened doubleheaders are one way to make up games, but Commissioner Rob Manfred said long days at the ballpark are a concern because of the virus. Making doubleheader games seven innings long can help, at least in theory.

But the Tigers and Reds were supposed to start at 12:10 p.m. on Sunday, and that was pushed back because of the bad weather. Then the first game nearly went into "extra" innings. It was tied in the top of the seventh before Cincinnati scored and won 4-3.

"It's definitely different," Gardenhire said. "You can use your bullpen a lot different, earlier in the game and try to get through that part. We had, you know, opener in both games, so we had to use a lot of pen guys."

A shorter game can take less of a toll on a team's bullpen, and it also presents a chance for a dominant starter to shine.

"Sounds obvious, but everything happens faster. It's almost like one good way to look at it is the first inning becomes the third inning," Reds manager David Bell said before Sunday's games. "I remember in the minor leagues seeing a lot of pitching gems in the seven-inning games, so I think it's an opportunity for starting pitchers -- to really from pitch one, you can see the end a little bit quicker."

Sure enough, Cincinnati's Trevor Bauer threw a two-hit shutout in the second game against Detroit. But that effort took 2 hours, 36 minutes, and the opener was played in 2:25. That would feel short if it were a nine-inning game, but it wasn't like the Reds and Tigers just breezed through the day.

The Tigers have another doubleheader scheduled for Wednesday against St. Louis -- if the Cardinals can play.

There was a time when doubleheaders were a constant presence in the majors. The Boston Braves played a record 46 of them in 1945, according to SportRadar. But last year, there were only 33 doubleheaders total, and the New York Yankees led the way with seven.

Now these seven-inning doubleheaders are a possibility every team should be prepared to face.

"We'll do our best when that's in front of us, try and win those games. Obviously, it's a little bit different," Yankees manager Aaron Boone said. "You know, it's hard to know how you attack those days until you're there and what the day before looked like, what the days coming up look like -- who's on the mound those days? Those are all things you kind of factor in as you get closer. I don't know how much necessarily changed, other than it's a little bit different circumstances that we have to navigate."