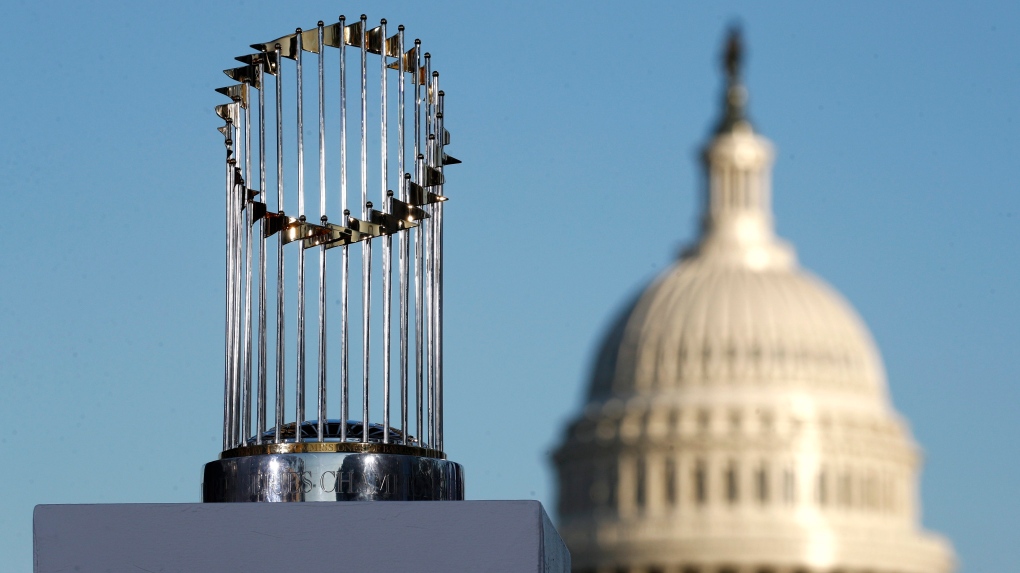 The World Series trophy stands on a stage in front of the U.S. Capitol dome, Saturday, Nov. 2, 2019, in Washington. (AP Photo/Patrick Semansky)

SCOTTSDALE, ARIZ. -- MLB Commissioner Rob Manfred apologized Tuesday for what he called a disrespectful reference to the World Series trophy as a "piece of metal."

Even before being asked about it, Manfred said he made a mistake with those comments while trying to deliver a rhetorical point in an interview two days earlier.

"I referred to the World Series trophy in a disrespectful way, and I want to apologize for it," Manfred said. "There's no excuse for it. ... It was a mistake to say what I said."

MLB players, already upset with Manfred's handling of the Houston Astros' sign-stealing scandal and some of his comments in trying to explain it, became further infuriated by his "piece of metal" comment during a lengthy interview with ESPN on Sunday, the same day he spoke in Florida.

While speaking at the Cactus League media day in the Arizona desert, Manfred also pledged Tuesday to protect Oakland right-hander Mike Fiers, the ex-Astros pitcher who became the whistleblower when he went public in November to The Athletic.

"We will take every possible step to protect Mike Fiers wherever he's playing, whether it's in Houston or somewhere else," Manfred said. "Mike did the industry a service."

The Astros play their first road game of the regular season March 30 at the A's, who won 97 games each of the past two years to finish second to Houston in the AL West both times.

Cubs lefty Jon Lester, a three-time World Series champion -- with the Boston Red Sox in 2007 and 2013, and Chicago in 2016 -- had some choice words for the commissioner earlier Tuesday.

"That's somebody that has never played our game. You play for a reason, you play for that piece of metal. I'm very proud of the three that I have," Lester said at Cubs camp in Mesa, Arizona. "If that's the way he feels, then he needs to take his name off the trophy."

Lester said the first thing he shows visitors at his house is the displayed trophies he has won.

"I'm proud of them. That's a lot of years, a lot of hard work. You can't just bring it down like that," the five-time All-Star said.

Manfred, after meeting with the general managers and managers of teams that train in Arizona, said he has taken great pleasure in presenting the past five World Series championship trophies since he became the commissioner.

James sent a two-part tweet Tuesday imploring Manfred to listen to the upset players. The three-time NBA champion and four-time MVP said he would be irate and uncontrollable if he found out he had been cheated out of a championship, punctuating his comment with an asterisk-filled expletive, and adding the hashtag .JustMyThoughtsComingFromASportsJunkieRegardlessMyOwnSportIPlay.

"Listen here baseball commissioner listen to your.....players speaking today about how disgusted, mad, hurt, broken, etc etc about this," James wrote in part, adding, "you need to fix this for the sake of Sports!"

Atlanta Braves outfielder Nick Markakis spoke out earlier Tuesday, saying he believed the commissioner had completely mishandled the situation with the Astros and that "every single guy over there deserves a beating."

Manfred suspended Houston manager AJ Hinch and general manager Jeff Luhnow for one season for the team's actions in using video to steal catcher's signs in 2017 and 2018, and the pair were fired by Astros owner Jim Crane. Manfred fined the Astros $5 million and stripped them of their next two first- and second-round draft picks.

Players were not disciplined and their 2017 World Series title remained intact.

Dozens of big leaguers have criticized the penalties as being too lax, including Los Angeles Angels star Mike Trout, NL MVP Cody Bellinger, and All-Star pitchers Yu Darvish of the Cubs and Trevor Bauer of the Reds.

Manfred said he's never seen so much "commentary from players about other players."

The commissioner said MLB reached out to the players' association for player co-operation after early efforts in making progress in the investigation were unsuccessful. Manfred said that co-operation came in exchange for blanket immunity for players, an agreement reached to end a stalemate.

"One of the principal complaints seems to be that the Houston players were not disciplined," Manfred said. "And that lack of discipline immunity was negotiated with the union that represents the players."

Union head Tony Clark said in a statement Tuesday night that "any suggestion that the association failed to co-operate with the commissioner's investigation, obstructed the investigation, or otherwise took positions which led to a stalemate in the investigation is completely untrue. We acted to protect the rights of our members, as is our obligation under the law."

The players' association also said it has been working with MLB for the past two weeks on potential rules changes regarding "sign stealing, in-game technology and video, data access and usage, club audits and disclosures, player education, and enforcement -- including the potential for player discipline."

"We have made it clear to MLB that no issue is off the table, including player discipline," the statement added.

As for not stripping the Astros of the 2017 World Series title, Manfred said he was "very concerned about opening the door to altering results that took place on the field. There are a lot of things that have happened in the history of the game that arguably could be corrected. And I just think it's an impossible task for an institution to undertake."