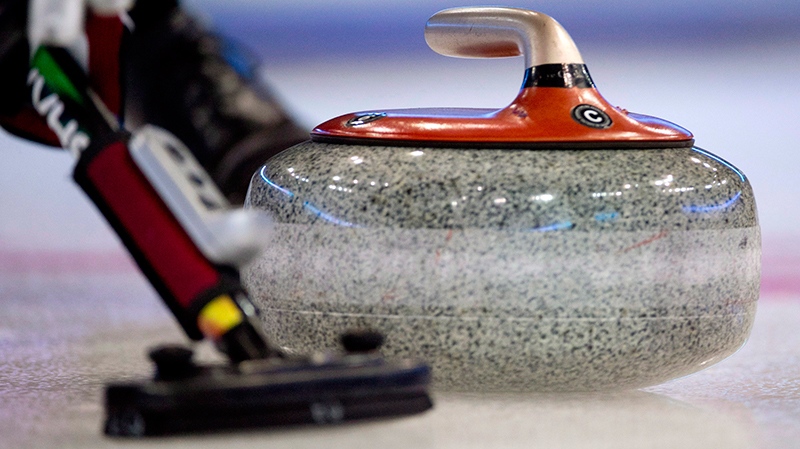 The potential for an unprecedented Canadian curling double was certainly there ahead of the Beijing Games. A Curling Canada rule that has been in place since mixed doubles was added to the Olympic program again prevented it from happening.

"Tons of other athletes play in multiple disciplines in the Olympics," curler Brent Laing said in an interview at the team trials. "That's the beauty of it. (Canadian) curlers can't break Olympic gold-medal records because we can only play in one event out of Canada."

Many of the country's top team curlers also excel in the mixed doubles format, which made its Olympic debut four years ago.

However, Curling Canada -- unlike many other top curling federations -- has always ruled out Olympic mixed doubles as an option for players who have already qualified for the Games in four-player team events.

The federation cites potential fatigue, tight schedules and strong domestic curler depth as some of the reasons.

Mixed doubles national coach Scott Pfeifer said the original intent of the rule was to ensure that winners of the four-player team trials had their "full focus and attention" on that discipline in the lead-up to the Games.

"We feel that this is the best way, at least for this quad -- and we're always open to reviewing it -- (of) basically increasing our podium potential for all three: our mixed doubles, men's and women's disciplines," he said in a recent video conference call.

John Morris and Kaitlyn Lawes won mixed doubles gold at the 2018 Games in Pyeongchang, South Korea but Canada was held off the podium in the team events.

Lawes is returning to the Games with skip Jennifer Jones while Morris and Rachel Homan were named as Canada's mixed doubles duo after the cancellation of the trials due to COVID-19 issues. Brad Gushue will skip the Canadian men's team entry in Beijing.

The rule eliminated the possibility of Jocelyn Peterman and Brett Gallant -- the top-ranked duo in Canada -- from playing mixed doubles in Beijing, since both qualified with their regular teams. Jones, who's ranked No. 2 with Laing, was also left out of the mix.

Gushue, who won Olympic gold in 2006 at Turin, Italy, took the national mixed doubles title last season with Kerri Einarson. He said playing in both disciplines would be challenging since a single Olympic competition can be a grind.

"But we have enough talent in this country that we can allow someone else to go and be rested and be prepared and focus on that event only. Some other countries don't have the luxury that we have."

Canada, Sweden, Great Britain, Switzerland and Norway are among the headliners in the 10-team Olympic mixed doubles field.

"It's a very compressed timeline," Pfeifer said. "Lots of physical and mental tolls that are taken on the athletes. We know that there are some other countries that are doing (both disciplines) this year.

"Fortunately (in) Canada we're blessed with a wide, big talent field that we can draw from."

Mixed doubles medal games are set for Feb. 8, one day before the men's team round-robin opener and two days before the start of women's team play. The curling schedule runs through the final day of Olympic competition on Feb. 20.

It could mean a pressure-packed emotional journey of over two weeks -- about twice as long as a regular championship -- for some players.

"If you're tired at the Olympics, there's something wrong with you," said Laing, who played second for Koe in 2018. "So I don't see (fatigue) being an issue. Yeah there's lots of stress but it's fun. It depends on how you view it and how prepared you are and what you expect.

"I don't see a downside in terms of physically or mentally or anything really. The only downside I see is my kids would get mad because I'd be away for a whole month instead of just three weeks."

Laing was entered in the mixed doubles trials with substitute partner Selena Njegovan. Lawes, who filled in for Homan at the 2018 playdowns, said she "100 per cent" wished that Canadian athletes could play in both disciplines at the Games.

"It's the Olympics," Lawes said at the team trials. "I think you can run off adrenalin. It would be worth that opportunity."

Curling broadcaster Mike Harris, who won Olympic silver for Canada at the 1998 Nagano Games, sees the logic behind the federation's current setup.

"I would lean to staying away from playing both for Canada just for the reason that we have the depth," he said. "We can send an excellent team to the Olympics in mixed doubles without having to use the players that are already going in the four-person game."

Morris, now 43, is making his third trip to the Winter Games. He also won Olympic gold at the 2010 Vancouver Games with skip Kevin Martin.

"I think when I was 25, I could play both no problem and then you could throw me into a tour championship right after and I'd be fine," Morris said in a recent interview. "However at this stage of my career, when you're dealing a bit more with your recovery time, it's not as quick. And you're not as full of piss and vinegar as you are when you're young.

"It would be a bit more of a challenge. But for guys like Bruce and Oskar, I don't see that as being a challenge for them."

This report by The Canadian Press was first published Jan. 20, 2022.