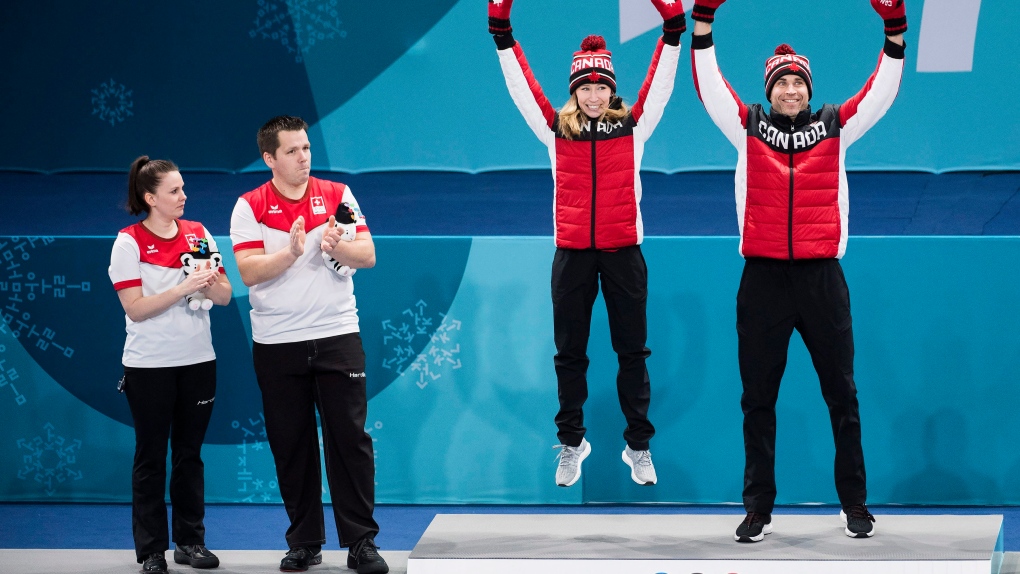 Canada's gold medal in mixed doubles curling at the Pyeongchang Olympics has thrust a sport that's been growing in popularity into the national spotlight, with organizers saying they expect the win to boost interest even further.

The two-person variant of the sport is brand new to the Games and saw Canadians John Morris and Kaitlyn Lawes beat a Swiss team to top the podium on Tuesday.

The doubles game is faster and requires more skill than traditional recreational curling, said Mark Horechka, manager of Saskatoon's Granite Curling Club, which has begun surveying members to see if they'd be interested in joining a mixed doubles league.

Responses so far have been varied, he said, but there's "no question" that the Olympic gold will raise demand.

"It takes it certainly to another level, and it's the type of exposure that makes a difference at the club level," Horechka said.

The Halifax Curling Club is also looking to introduce a mixed doubles league, said vice-president Rob Belliveau. They've hosted three mixed doubles trial nights so far, he said, and all of them sold out.

A fourth night is coming up this weekend, Belliveau said, and it too has sold out, with many interested participants now on a waiting list.

"The strategy can be quite different, and certainly the physicality of it can be more," he said. "We wanted to gauge what our members thought of it. And they certainly are open to it."

In traditional curling matches, each team has four players -- one to throw the rocks, two to sweep and one calling directions. But the dynamic has to change when there are only two people on the ice.

"Teams decide whether they put somebody down in the house to call the line, and the shooter can get up and brush their own stone, which isn't typical in four-person curling," Belliveau said.

It's the only variant of curling with mixed-gender teams in the Olympics, though Belliveau notes leagues often have mixed teams at the recreational level.

Mixed-gender teams open the door to heterosexual couples playing together, he noted, which can be appealing to some.

Toronto curler Stuart Sankey sounded a note of caution, however, for couples considering curling together.

"They tend to bring any sort of personal squabbles onto the ice," he said of the couples he has curled with over the last 12 years.

Sankey also noted that mixed doubles can be tricky from a business perspective.

"A curling club makes money when it's full with curlers, so you want the ice full," he said. "As a revenue stream, you don't want to have a bunch of leagues that are only mixed doubles because then you only have four people on the ice instead of eight people on the ice."

But for those who want to try out the variant of the sport, he said he suspects there will be a growing interest in mixed doubles. And whether it's mixed doubles or traditional curling, Sankey says there's plenty to enjoy about recreational curling.