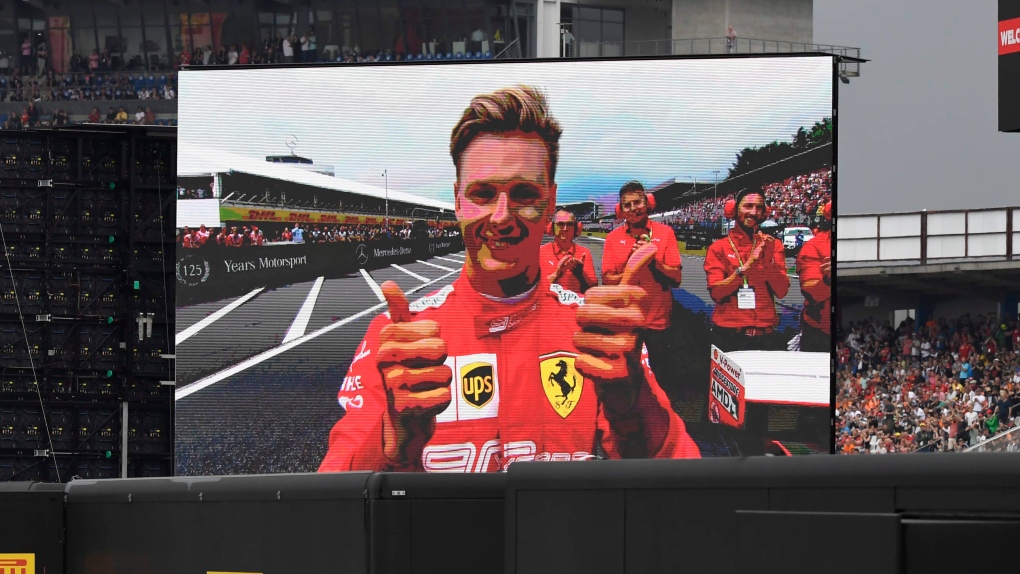 German F2 driver Mick Schumacher is seen on a big screen as he thumbs up before driving his father Michael Schumacher's 2004 German Grand Prix-winning Ferrari car prior to the start of the German Formula One Grand Prix at the Hockenheimring racetrack in Hockenheim, Germany, Sunday, July 28, 2019. (AP Photo/Jens Meyer)

The son of Formula One great Michael Schumacher started from pole position for the Prema Racing team and finished the 28-lap race ahead of Japanese driver Nobuharu Matsushita and Brazilian Sergio Sette Camara.

"I am just so happy. (It was) quite hard. Obviously the tires were degrading," Schumacher said. "Amazing race."

The younger Schumacher is racing in his first F2 season. The 20-year-old German is part of Ferrari's driver academy and is tipped for a future move into F1. He test-drove a Ferrari F1 car this year in Bahrain.

"Having the first victory in F2 is a great thing," he said. "Whether I go to F1 next year or in two years or maybe three, I don't know."

His father drove his last race for Ferrari in 2006, at Interlagos in Brazil. He retired but returned to F1 with Mercedes for three more seasons in 2010. An avid skier, Schumacher was skiing with his son in the French resort of Meribel in December 2013 when he fell and hit the right side of his head on a rock, splitting open the helmet.

Doctors worked to remove blood clots from his brain, but some were left because they were too deeply embedded. Schumacher's condition stabilized after he was placed in a drug-induced coma, from which he later emerged. But updates on his health have been scarce since he left the hospital in September 2014 to be cared for privately at his Swiss home by Lake Geneva.