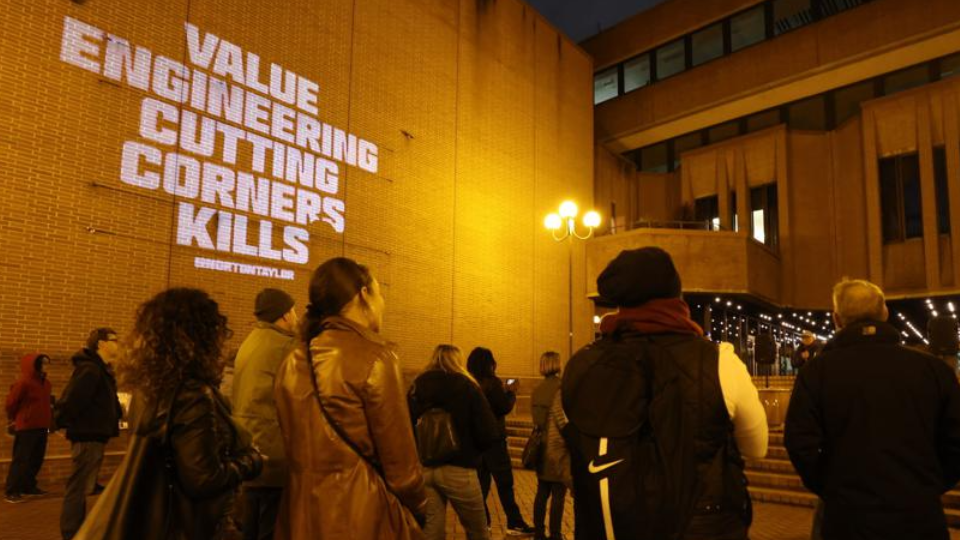 People attend a rally outside Kensington Town Hall to bring attention to the lack of support and action over the Grenfell Tower fire, in London, Sunday Nov. 14, 2021. (James Manning/PA via AP)
London -

Building materials maker Kingspan said it had agreed with the Mercedes-AMG Petronas Formula One racing team to end a partnership deal after protests from the families of people who died in a high-rise fire in London.

The company said in a statement Wednesday that it was "deeply aware of the sensitivities raised in recent days" by the deal. "So we have jointly agreed that it's not appropriate to move forward at the current point in time," Kingspan said.

The team announced a sponsorship deal last week to allow Kingspan that allowed the company to put its logo on the nose cone of world champion Lewis Hamilton's car beginning with a weekend race in Saudi Arabia.

Survivors and family members of the 72 people who died in the 2017 Grenfell Tower fire had asked the team to sever its ties with Kingspan. The fire started in a fourth floor refrigerator and raced up the residential building, which experts said likely was fueled by flammable materials used in an exterior renovation.

Kingspan reiterated Wednesday that it had nothing to do with the refurbishment project blamed for the fire and that it wasn't responsible for the cladding that has been one of the focal points of an inquiry.

"Our K15 insulation board was misused in this unsafe and non-compliant system." the company said in a statement. "We did not supply or recommend K15 to Grenfell Tower ... It was substituted without our knowledge."

Mercedes CEO Toto Wolff apologized to family members after they complained about the deal. He said last week that he hoped to meet with Grenfell Tower survivors as soon as possible.

Criticism of the deal was particularly difficult for Mercedes because Hamilton, a seven-time world champion from Stevenage, England, has been outspoken in his support of the Grenfell community. Hamilton is currently in second place in the Formula One driver's standings with one race left in the season.