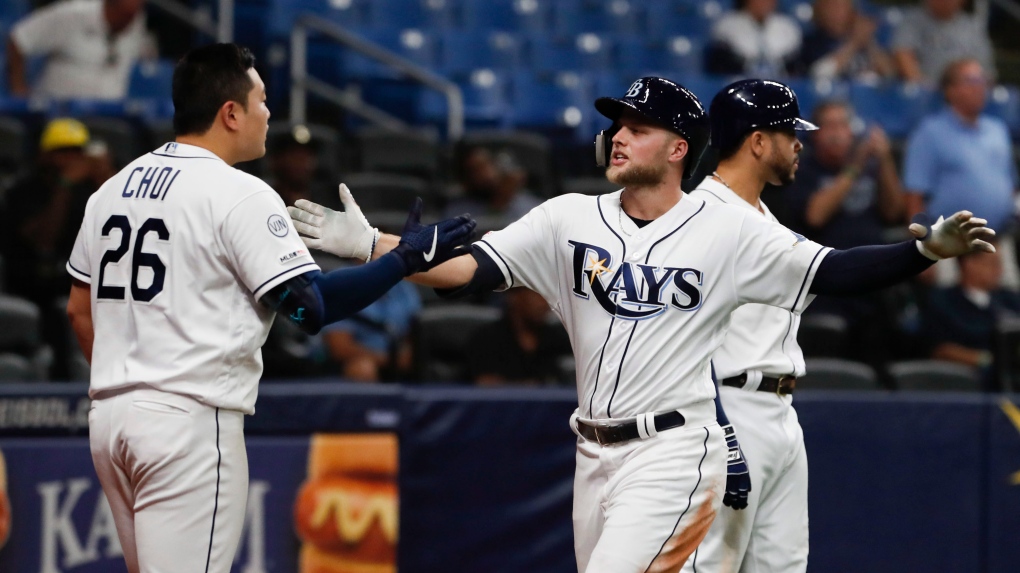 The All-Star hit his 27th homer, leading Tampa Bay over the Toronto Blue Jays 6-4 on Thursday night and maintaining the Rays' half-game lead over Oakland for the AL's top wild card.

"He's had an awesome season to date," Tampa Bay manager Kevin Cash said. "Picked us up many, many ways, and he did it again tonight. Hopefully it continues for some more weeks."

Meadows homered off Buddy Boshers (0-3) leading off the seventh for a 5-4 lead and added an RBI double in the eighth against Ryan Tepera. Meadows also broke a tie in a 2-0 win over Baltimore in Tuesday's doubleheader nightcap.

Tampa Bay, seeking its first post-season appearance since 2013, opened a 1 1/2-game lead over Cleveland, which is third in the wild-card standings. The game drew just 5,962, the second-smallest crowd this season at Tropicana Field.

"We're in a countdown right now," Rays left fielder Tommy Pham said. "Every game matters, and we need to win."

Rookie Bo Bichette had his second multihomer game for the Blue Jays, who have lost four straight and 13 of 16. Toronto is on a pace for 99 losses.

Bichette homered in a 13-pitch at-bat leading off the first and tied the score 4-4 with a two-run drive in the seventh off Oliver Drake (4-2).

"I think it's a huge advantage because the more you see a pitcher, the more confident you get," Bichette said of his first-inning at-bat. "When it goes that many pitches, most of the time you see everything he has so I felt good."

Emilio Pagan allowed a double to Reese McGuire in the ninth and walked Derek Fisher before getting a fielder's choice grounder from Bichette and retiring Cavan Biggio on a game-ending flyout with runners at the corners. Pagan got his 18th save in 25 chances.

Vladimir Guerrero Jr. rolled to his right on a nifty slide to complete a two-out triple in the first and cut Toronto's deficit to 3-2 with an RBI single in the sixth.

"I was hoping he'd stay at second base, to tell you the truth," Blue Jays manager Charlie Montoyo said. "But he made it to third base, so good for him."

Pham swiped third in the seventh to join B.J. Upton (2007, '11, '12) as the only players in Rays history to have 20 steals and 20 homers in the same season. Pham later left with right elbow inflammation, which he said has been bothering him recently.

Rays: LHP Blake Snell (left elbow bone chips surgery) will make his first rehab start Saturday with Triple-A Durham. ... CF Kevin Kiermaier fouled a ball off his right foot and was hit by two pitches on his right foot but stayed in the game. ... C Travis d'Arnaud left with neck and shoulder stiffness after being hit a foul ball in the eighth. Cash said d'Arnaud has a nice welt on the shoulder.

The Rays purchased the contract of 24-year old INF Kean Wong, who was in his seventh minor league season, from Triple-A Durham. "A dream come true," said Wong, who is from Hilo Hawaii. He struck out in both at-bats in his big league debut.

Rays: Two-way player Brendan McKay (2-3) will get the start. The left-hander was shut down for around 10 days at the end of August due to left shoulder fatigue that resulted in him getting a cortisone shot.