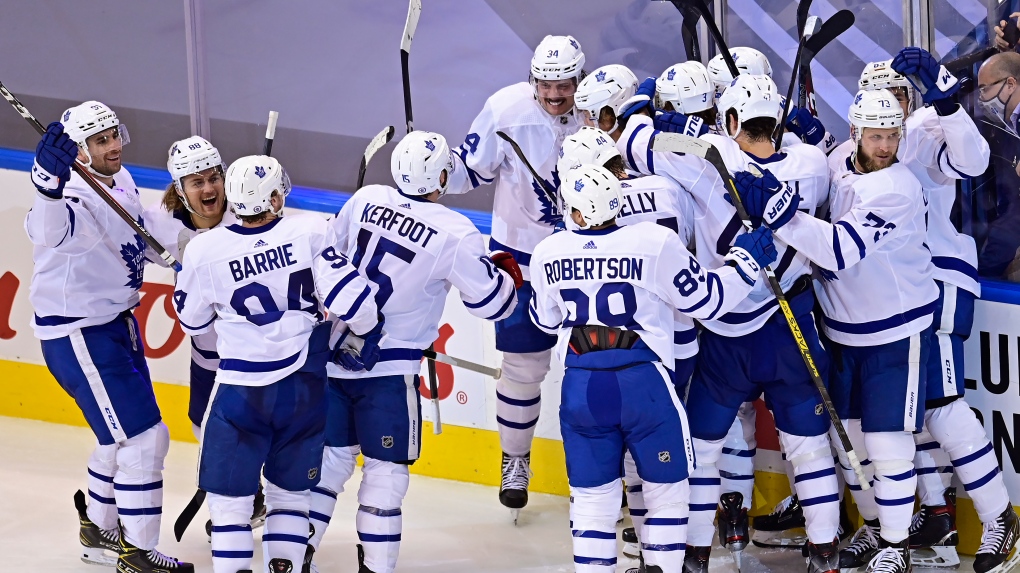 TORONTO -- As the seconds drained away on the clock high above the ice at an empty Scotiabank Arena, doubt began to creep into the Maple Leafs.

Their hopes were high heading into the NHL's restart to its pandemic-delayed season. After consecutive seven-game playoff defeats to the Boston Bruins, this time was supposed to be different for a young, talented, well-paid core.

Instead, it was looking like more of the same, especially after Toronto blew a three-goal lead in losing Game 3 to Columbus in overtime 24 hours earlier.

The defensive-minded Blue Jackets were up 3-0 and grinding towards a series-clinching win Friday. Then, almost out of nothing, the Leafs found life. They got one goal with under four minutes to play, another 49 seconds after that and tied things in miraculous fashion with 22.2 ticks remaining in regulation.

That set the stage for even more drama in the extra period.

Auston Matthews scored on the power play at 13:10 of overtime as the Leafs rallied past the Columbus Blue Jackets for an improbable 4-3 victory to force a fifth and deciding game in their qualifying round series.

"Your mind just kind of goes blank," said Matthews, who also had two assists. "It's a credit to every single guy on our team for just sticking with it, battling back and just not quitting."

It's a serious understatement to suggest a comeback seemed likely with four minutes left.

"Natural that those thoughts start to creep in when they score the third goal," Hyman said of the emotions on the bench. "But it was just put your foot on the gas, keep going.

"It's not over until, until the time runs out."

Mitch Marner added three assists for Toronto, which entered the 24-team resumption of play as the No. 8 seed in the Eastern Conference. Nylander, Tavares and Hyman also had helpers.

"Just the resilience of our team," Leafs head coach Sheldon Keefe said of what he will remember most about an incredible night. "And then just how it put new life in our group.

"It was pretty remarkable to be a part of it."

Cam Atkinson, Vladislav Gavrikov and Boone Jenner replied for Columbus, the No. 9 seed in the East. Elvis Merzlikins made 49 saves in first post-season start.

"We just stopped moving our feet, kind of stayed back and stopped forechecking the last five and they took advantage of it," said Blue Jackets defenceman Seth Jones, who lost blue-line partner Zach Werenski to injury in the third period. "This is what happens in a series. The ups and downs, it's a rollercoaster."

After Columbus captain Nick Foligno took a tripping penalty in the extra period that had both he and head coach John Tortorella seething, Tavares found Matthews with a cross-ice feed and he beat Merzlikins on a one-timer as the Leafs spilled over the bench.

Merzlikins, who stopped all 21 shots he faced for Columbus in Thursday's stunning 4-3 overtime victory after coming on in relief of Joonas Korpisalo with the Blue Jackets down 3-0 midway through the second period, was unbeatable with 58 straight saves in the series until Nylander scored with 3:57 left in regulation to get his team going with Andersen on the bench.

Tavares then roofed a shot upstairs with Toronto still playing 6-on-5 to get to within 3-2. And after Leafs defenceman Morgan Rielly thwarted an empty-net goal at the other end, Matthews found Hyman, who snuck a shot under Merzlikins with 22.2 seconds left to completely flip the script.

The 26-year-old netminder, who's playing his first season in North America and was outstanding when Korpisalo was out injured before the schedule was suspended in March because of COVID-19, dropped his head in despair as the Leafs celebrated inside their fan-less, cavernous home rink.

Toronto looked dead and buried at 14:18 of the third when Foligno stole the puck from Rielly and fed Jenner, who scored upstairs on Andersen. Rielly smashed his stick on the bench in frustration before the late drama.

Wearing their white jerseys as the road team for the second straight night, the Leafs trailed 1-0 after the first, and Columbus doubled that lead at 4:40 of the second when Gavrikov's point shot deflected in off Marner's stick.

Keefe loaded up his first line with Marner, Matthews and Tavares looking for a spark, but Toronto wasn't able to break through as the period wore on against the stingy Blue Jackets.

Veteran Leafs forward Jason Spezza, the oldest player on the team at age 37, dropped the gloves with Dean Kukan trying to light a fire of his own.

"Jason Spezza just did not want our season end," Keefe said. "That's playoff hockey. I mean, that's guys just not wanting to go down -- literally -- without a fight."

The Leafs, who lost bruising defenceman Jake Muzzin to injury late in Game 2, suffered that demoralizing setback in Game 3, with Keefe criticizing his team's mindset and execution, especially coming off one of its best performances of the season in a clinical 3-0 shutout in Game 2.

Toronto, which general manager Kyle Dubas said before the Stanley Cup tournament had matured through the process of getting prepared for the restart following an up-and-down season and those playoff losses to the Bruins, spent a lot of time working on its defensive play throughout summer training camp.

But issues the Leafs thought were fixed, or at least under control, bubbled to the surface as sloppy sequences with the puck, a lack of focus and system breakdowns cost them in falling behind 2-1 in the series.

Less than 21 hours after the defeat -- one that didn't end until 11:23 p.m. ET and gave Toronto fans ugly flashbacks to the team's late three-goal collapse in Game 7 against Boston in 2013 -- the Leafs provided some unimaginable scenes.

And now they have life.

"I've never been a part of anything like that," Spezza said. "With the firepower we have, with these guys, where they can put the puck in the net, we're never out of it. There's a great sense of belief in our group.

"We stuck with it the whole way."