Masai Ujiri's talk with Lowry the turning point in their relationship 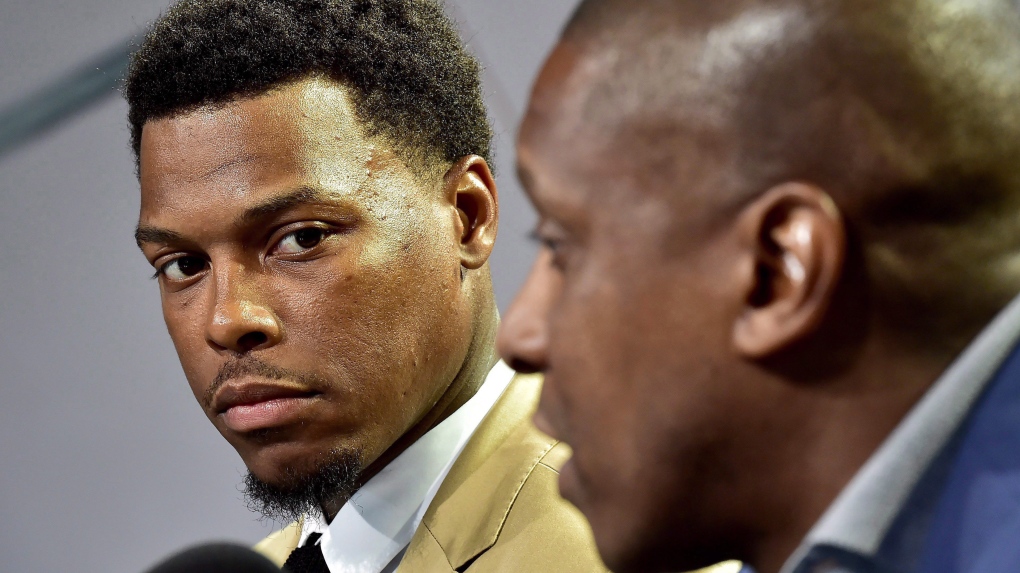 TORONTO -- Masai Ujiri pinpoints a particular conversation as the turning point in his relationship with Kyle Lowry this season.

When the Toronto Raptors president shipped franchise icon and Lowry's good friend DeMar DeRozan to San Antonio for Kawhi Leonard last summer, perhaps nobody was more hurt by the stunning move than Lowry.

But the two who've butted heads over the years had a heart-to-heart before February's NBA trade deadline. And it made all the difference.

"We have had our ups and downs, but I think this year there was a really good moment where we sat down and we really talked about what we wanted to accomplish," Ujiri said on the eve of the Raptors' NBA Finals debut. "And it's a tough conversation but these are conversations that you have to have.

"I did understand how Kyle felt when obviously we made the trade and it was tough. DeMar is his best friend. But in terms of Kyle, I've seen him grow as a person, as a leader on our team, and he can only get better from here."

The seven-year Raptors guard is having an outstanding playoff run, despite playing the entire conference finals with a sprained left thumb that he said causes unending pain. When Leonard was at the free-throw line in the dying seconds of the Game 6, Lowry was already celebrating the team's berth in the Finals. He pumped his fists. His face exploded in a childlike grin.

Looking back 10 months ago, Lowry's future in Toronto might not have seemed so rosy. The guard felt betrayed when DeRozan was traded.

How important was it to clear the air with Ujiri in February?

Lowry has kept in touch with DeRozan -- who was trending on Twitter during the Raptors' Game 6, for all the wrong reasons -- throughout the playoffs. He told Marc Spears of ESPN's The Undefeated that DeRozan is happy for the team.

"I've been speaking to him the whole way," Lowry told Spears. "One thing about him is that he legit cares about me as his best friend. He has texted everyone he has a relationship with and let them know how happy he is for us."

Lowry traditionally takes some heat for his scoring woes in the post-season. He did so again after he scored zero points in Game 1 of the opening round against Orlando. In Milwaukee, fans mockingly chanted "Play-off Low-ry!" while the guard was at the free-throw line -- despite the fact he'd dropped a playoff career-high 40 points against the Bucks a game earlier.

Lowry is the relentless engine that drives the Raptors. In one conference finals game in Milwaukee, he did a Black Ops dive to save a ball from going out of bounds. In Game 6, he dove for a loose ball twice on the same play. He's a crashing and tumbling advertisement for Rub-A535.

"He's a natural kind of leading type personality," said Toronto's coach Nick Nurse. "He plays a tough brand of basketball. So that's leading by example. The (possession in which he dove twice), you could go back and find a few of those. I think Game 5 or Game 4 down in Orlando. . . it might have been two rebounds again in a same possession thing."

While Leonard scored the famous buzzer-beater to beat Philadelphia in Game 7 of the conference semis, Lowry had two key steals in the final minutes. He also grabbed a big steal that led to a Leonard dunk late in Game 6 against the Bucks.

"So he makes a lot of tough plays. He takes charges. Blocks out a lot of bigger people. He does lead by example," Nurse said.

His hustle and heart won Ujiri over as well.

"There's something about that guy that I believe in, it's incredible," Ujiri said. "We have been through so much and he's a winner. It's incredible. He's been hit upside the head from every different angle in the world, whether it's personal, everything, and he survives it. Every day he come, he comes to win. Doesn't matter what mood he's in, he comes to win."

Ujiri recalled watching Lowry in a pre-season practice four or five years ago.

"They were playing pickup basketball, and the way he just competed, without anybody being in the gym," he said of the 33-year-old guard. "There was just five-on-five and a couple coaches in there. . . and he played his ass off. That's just how he is. He leads us in the right way."

Masai Ujiri's talk with Lowry the turning point in their relationship

Jumping on the Raptors' bandwagon? Here's what to know

We the North America? Data shows majority of U.S. also cheering for Raptors