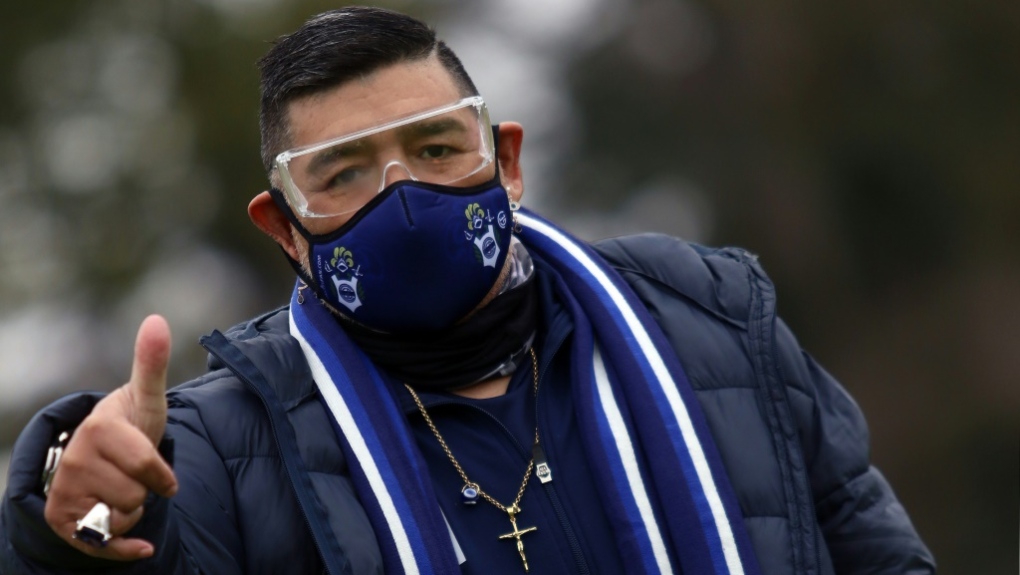 Diego Maradona (pictured September 2020) was hospitalized in Argentina, but his doctor ruled out any link to the coronavirus. (AFP)

Police raided Leopoldo Luque's surgery and home in search of possible evidence pointing to negligence, according to television images.

The probe was triggered by concerns raised by three of Maradona's daughters Dalma, Gianinna and Jana over the treatment he received for his heart condition at his home in Tigre, north of Buenos Aires, judicial sources said.

"Our investigations are ongoing, we are talking to witnesses including members of the family" of Maradona, a source close to the San Isidro inquiry said.

Luque, who declined to comment when contacted by AFP, had posted a photograph of himself with Maradona on the day the 60-year-old left hospital on November 12, eight days after surgery to remove a blood clot on his brain.

Maradona returned home to Tigre where he received round-the-clock medical care and could remain close to his daughters.

He died of a heart attack on Wednesday, and was buried on Thursday at the Jardin de Paz cemetery on the outskirts of the Argentine capital.

"The clinic had recommended that he go elsewhere to be hospitalised, but the family decided otherwise. His daughters signed for him to be discharged from the hospital," said a family member, on the condition of anonymity.

Maradona's lawyer, Matias Morla, had called for an investigation into claims that ambulances took more than half an hour to reach the football star's house in response to an emergency call on the day of his death.

No complaint has yet been filed. "The case was initiated because he is a person who died at home and no one signed his death certificate. It does not mean there are suspicions or irregularities," a judicial source said, requesting to remain anonymous.

A preliminary autopsy report established that Maradona died in his sleep at noon on Wednesday of "acute lung edema and chronic heart failure."

The prosecutor's office is awaiting the results of toxicological tests on Maradona's body. The three prosecutors working on the case have requested his medical records, as well as recordings from neighborhood security cameras.

Three funeral home workers provoked outrage for posing for photos next to Maradona's open coffin, smiling with their thumbs up, as it lay at the presidential palace ahead of his burial. One of the men has since apologised.

Maradona's last public appearance came four weeks ago for his 60th birthday celebration at the stadium of Gimnasia y Esgrima La Plata, the club he was coaching before his death.