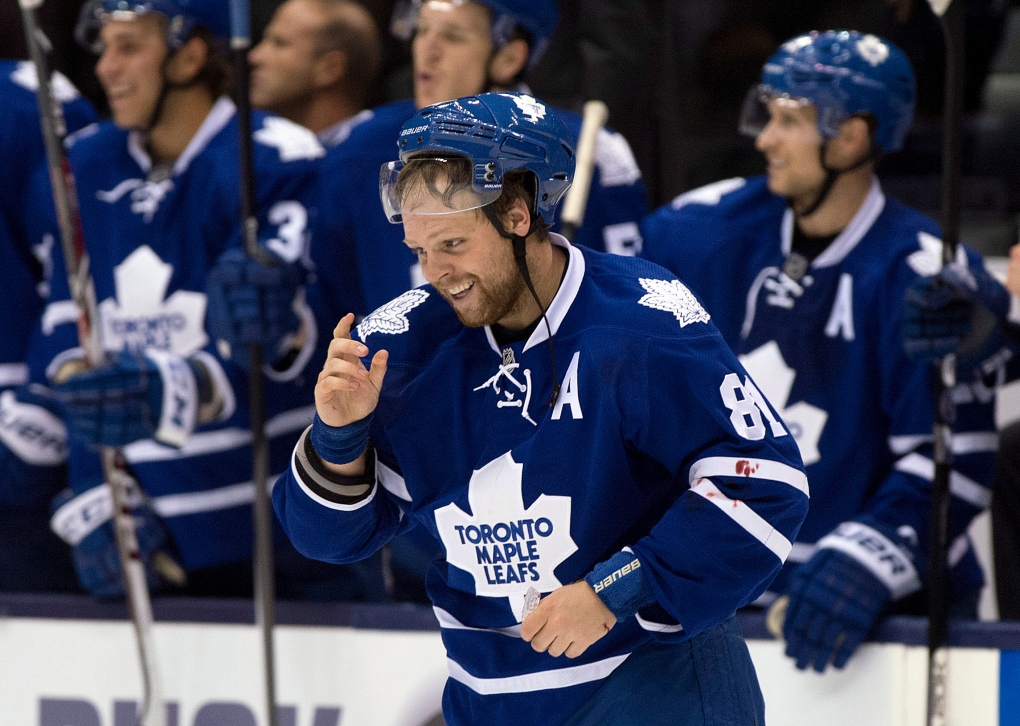 TORONTO -- By the second week of the pre-season, Randy Carlyle was tired of talking about Game 7.

In chiding reporters for asking about the Toronto Maple Leafs' stunning collapse in the first round against the Boston Bruins last season, the coach joked that he "forgot about it already."

It's hard to forget about an elimination that stemmed from surrendering a three-goal lead with 14:31 left in the third period and losing in overtime. But that's exactly what the Leafs are trying to do as they attempt to make the playoffs for the second consecutive year and perhaps even take a step forward by winning a round.

"It's a tough pill to swallow at that time, and I think everyone's over it now and there's really no sense of looking at the past," centre Nazem Kadri said. "We're just looking forward. We know we can obviously do better than that. That experience, a seven-game series with arguably the best team in hockey, is something you can't teach."

Losing in such heartbreaking fashion could be a teachable moment for a group that was in the playoffs for the first time. But listen to general manager Dave Nonis and it's like Game 7 was just another end to a season.

The Leafs had more than five minutes to think about being in the Eastern Conference semifinals -- with home-ice advantage, no less -- before Nathan Horton, Milan Lucic and Patrice Bergeron tied the score. Bergeron won it in overtime, sending the Leafs home for the off-season.

"That hockey game will haunt me until the day I die," Toronto winger Joffrey Lupul tweeted the next day.

It's a game that has the potential to haunt the Leafs for a long time. But even if it's in players' heads, they're not saying so.

"I haven't thought too much about it," centre Tyler Bozak said. "I mean we don't talk about it that much or anything like that, but obviously it's something that is pretty tough to forget and gives you a lot of motivation. But in the end I think it's something that we learn from and it'll help us in the future."

Sure, it might. But Nonis made the better argument that last season as a whole should have a more profound impact on the Leafs than the final 11 minutes.

Toronto won 26 games and picked up 57 points during the lockout-shortened season. Over a full 82 games, that would be a 97-point pace.

Most importantly a Leafs team made the playoffs for the first time since 2003-04.

"It was a different year for us," Nonis said. "We had to push people. Coaches, players pushed themselves to do what they normally hadn't done, and it allowed us to have a little bit of success."

But it's not nearly enough, especially given that new Maple Leaf Sports & Entertainment CEO talking about planning out the eventual Stanley Cup parade though Toronto.

So the Leafs made some changes. They traded for Los Angeles Kings backup goaltender Jonathan Bernier to team him up with James Reimer, traded for Chicago Blackhawks centre Dave Bolland to replace the bought-out Mikhail Grabovski and signed right-winger David Clarkson to a seven-year, $36.75-million contract.

Clarkson will miss the first 10 games because of a suspension, but his addition and the others are expected to make a substantial impact.

Kadri got a two-year, $5.8-million deal after recording 44 points in 48 games. Toronto is well-positioned in those two seasons if he's still a point-a-game player.

"Do I think I can? Yeah, I think I can. Am I saying I'm going to? I don't know yet," Kadri said. "I'm not making any promises. I'm just going to go out there, try and handle myself like I did last year, and obviously if I'm working as hard as I possibly can, I'm going to get some bounces and the puck's going to fall (for) me some games."

Forward Phil Kessel (20 goals and 32 assists in 48 games) hopes this is the season he scores 40. He's in a contract year and could be an unrestricted free agent next summer.

By then, his value could be astronomical, especially with the salary cap expected to rise. Kessel, who turns 26 on Oct. 2, brushed off worries about re-signing with the Leafs right away and may be set for a career year.

"I think for a young player, I probably expect him to be better than he was last year," Lupul said. "He's still at that stage of his career, for sure, where he's still improving. Same thing for him as it was for me or anyone else in the room -- that playoff series was a really good experience, even though it didn't end the way we hoped, you take a lot out of that. It was a hard-fought playoff series against a really good, veteran hockey team."

It all comes back to that Bruins series and Game 7, whether the Leafs like it or not. They'll be reminded of it Nov. 9 when they return to TD Garden in Boston for the first time.

There wasn't one systemic failure that caused the infamous finish. So that also means there isn't one solution or area to concentrate on.

The next challenge for the Leafs is to get over that disappointment and qualify for the playoffs. Carlyle bristled at the fact that realignment makes it slightly tougher to get in because of 16 teams in the Eastern Conference to 14 in the West, but the task remains the same.

Don't just make the playoffs but try to advance.

"That's a long way away, looking to the second round. And I think it would probably be a mistake to think that way," Lupul said. "I'm sure everyone would kind of like to fast-forward back to being in the first round of the playoffs again, but the truth is it's a lot of work to get there and that's what our focus is on first."