Lowry has 33 points, 14 boards and Raptors open restart with win over Lakers 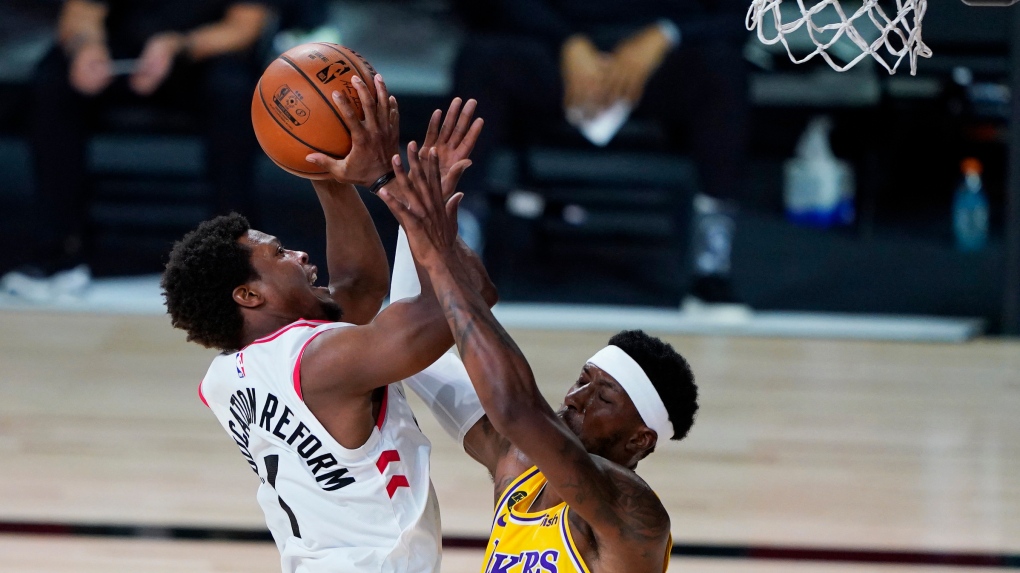 LAKE BUENA VISTA, FLA. -- Nearly five months after he'd played a meaningful game, and on a night that was bigger than basketball, Kyle Lowry had no plans to pace himself.

The Raptors' veteran guard had 33 points and a career-high 14 rebounds to lead Toronto to a 107-92 victory over the Los Angeles Lakers on Saturday in their opening game of the NBA's much-anticipated restart.

“Nah, man. Nick (Nurse, Raptors head coach) says he's going to ease us back in and use it as exhibition,” Lowry scoffed. “But our competitive spirit, we have too many competitive guys out there that want to go out there and play and hoop and win games, especially playing against a team like the Lakers, a team that is No. 1 in the West. The competitive juices get going.”

OG Anunoby had 23 points, while Pascal Siakam added 15 and Fred VanVleet chipped in with 13 points in the Raptors' first real game in 145 days, and in a world that's drastically changed in the time since.

LeBron James, who was singing along to “O Canada” when the camera panned past him, had 20 points and 10 rebounds, while Kyle Kuzma added 16 points.

The NBA's restart is unprecedented. The stakes, on several levels, are huge. Emotions are running high - and it was obvious from the night's pre-game ceremonies.

Linking arms in a line behind the words “Black Lives Matter” on the court, the Raptors and Lakers kneeled for both “O Canada,” because of the systemic racism and police brutality that also exists north of the border, and “The Star-Spangled Banner.”

Nurse said in that moment he thought of Colin Kaepernick, who first kneeled in an NFL game nearly four years ago.

“I tip my hat off to the Lakers and their organization for staying down there with us during the Canadian anthem,” Lowry said.

“To be down there for four straight minutes . . . I had padded tights on my knees. To think about a human being kneeling on another human being's neck for eight minutes and 46 seconds, that's a bad thought to have, an unbelievable messed-up thing that man did to an innocent Black man,” he said in reference to George Floyd's killing by a police officer in May. “Those are the things that went through my head.”

The reigning NBA champions last played in Utah on March 9, just two days before the NBA shuttered under the threat of COVID-19. They were the hottest team in the NBA at the time with a league-best four-game win streak.

They made up for lost time on Saturday in their fifth straight victory.

Was it a statement game?

“I don't think anybody's going to pay much attention, they don't ever seem to, but it's OK,” Nurse said. “Seriously man, we love to play the games and we like to compete, we know we're tough to beat, we really do, and I think there's a ceiling we can get to yet. But it was good, we played hard, we played good D tonight.”

They pounced on the Lakers - who'd edged the Clippers 103-101 in their opener two nights earlier - taking a 13-0 lead. But the Lakers replied and Toronto led just 23-21 to end the first quarter.

L.A. took its first lead of the game early in the second, and headed into the halftime break up 44-41 in the low-scoring game between the league's top two defensive teams.

“Great team. No ifs, ands, or buts,” James said of Toronto. “Well-coached, championship DNA. The media may not give them as much credit because Kawhi (Leonard) is gone, but players know what type of team they are.”

Lowry's reverse layup midway through the third capped a 22-3 Raptors run that had them up by 13. But the Lakers had sliced Toronto's advantage to 72-70 with one quarter to play.

James, who Nurse had described as a “freight train,” knocked down back-to-back three-pointers early in the fourth, but Anunoby immediately replied with a pair of long bombs.

Anunoby had a steal and running dunk, then VanVleet followed it up with a three to put Toronto up by 10 with five minutes to play.

Lowry drained a dagger three over the outstretched hands of Kuzma with 3:01 to play to put Toronto up by 11, hollering animatedly to his teammates during the ensuing timeout. The big bucket put the game all but out of reach.

“He was vintage Kyle tonight,” Nurse said. “He was scoring and flying around and taking charges and competing and getting us some critical buckets and keeping things ticking over - he was great.”

Saturday's game was the Raptors' first of eight seeding-round matchups each of the 22 teams are playing in the NBA's “bubble” at Walt Disney World. They face Miami on Monday.

The arena images were a reflection of these extraordinary times. Video boards of 300 virtual fans replaced the jam-packed crowds Toronto is accustomed to playing in front of. The Raptor mascot made a long-distance appearance, waving his arms madly, virtually, from a baseline video screen while James shot free throws.

Tipping off weeks after the killing of Floyd by a police officer sparked an American uprising - numerous NBA players marched in protests in the days that followed - the NBA vowed that the return of basketball wouldn't be a distraction from racial and social justice issues.

They're front and centre at the NBA's restart.

“It's big for me, to have an opportunity to go out there and play basketball and go out and spread our social messages that we have, Black Lives Matter,” Lowry said. “Go out there and talk about voter suppression. . . education reform, worrying about getting justice for Breonna Taylor. These things are all things that are getting me going and have me out there doing the best I can.”

“Not only us as a team, but the whole league is behind this movement, it's sending a strong message. And it's going to continue to work, because you have to obviously keep pounding the rock,” he said. “We're all in it together. We all trust each other. And I'm very proud of all my teammates.”

Both teams warmed up in black shirts with “Black Lives Matter,” and the majority of players have substituted their names on the backs of their jerseys with racial and social justice messages, picking from a couple dozen drawn up by the league.

This report by The Canadian Press was first published on August 1, 2020.