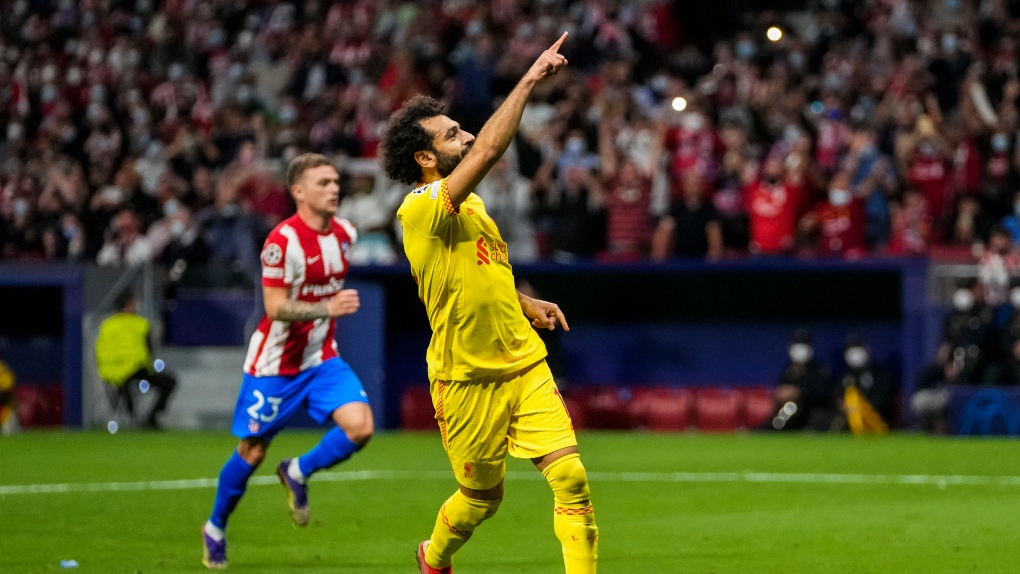 Strikes from Mo Salah and Naby Keita had given Liverpool an early lead, before a brace from Antoine Griezmann drew Atletico level before half time.

Griezmann was then shown a straight red card early in the second half for a high challenge on Roberto Firmino, but it was Mario Hermoso's error — inexplicably fouling Diogo Jota — that gifted Liverpool the chance to win it from the penalty spot.

Salah, fresh from his wonder goal against Watford over the weekend, duly obliged and slotted home the deciding goal.

There was still time for yet more drama, as Atletico was awarded a penalty after Jose Maria Gimenez was brought down by Jota.

However, after consulting with VAR, referee Daniel Siebert overturned his original decision much to the dismay of Atleti coach Diego Simeone and 60,000 Atletico fans.

Liverpool got off to the perfect start in what will likely be its trickiest game of the group stages, as Salah jinked inside three Atletico defenders before firing off a shot.

James Milner then touched the ball, as did an Atletico defender, with Salah's shot ending up in the net and the Egyptian being awarded the goal.

To the credit of Atletico Madrid's fans -- after a brief explosion of noise from the Liverpool fans in the away end -- the Wanda Metropolitano was quickly filled with chants of "Atleti, Atleti" as they attempted to rouse their team from its sluggish start.

For a group of players that so often look as though they would be willing to run through brick walls for head coach Simeone, in that opening period they were looking uncharacteristically meek.

Atletico's misery was then made worse as Keita fired home a fantastic volley from outside the area following Felipe's weak clearance.

Now there was no attempt from the home supporters to lift their players, with the Atleti supporters stunned into silence.

However, as though with the flick of a switch, the Wanda Metropolitano was soon rocking.

Following a corner, Antoine Griezmann was on hand inside the six-yard box to divert Koke's wayward shot past Alisson in the Liverpool goal.

Just 20 minutes had been played so far in Madrid, but already this was shaping up to be a Champions League classic.

Since returning to Atletico from Barcelona in the summer transfer window, Griezmann's form had been simmering but he was yet to hit the heights of his previous stint in red and white.

Tonight, however, was the night he truly reintroduced himself to the Atleti faithful.

It was Joao Felix, the Frenchman's attacking partner, that created the equalizer just 15 minutes later, brilliantly skipping away from Keita before finding Griezmann on the edge of the area.

The forward's first touch was brilliant, leaving a sluggish Virgil Van Dijk trailing in his wake, and his second calmly slotted the ball past Alisson to send the home fans into delirium.

After such a blistering start, it was now the Liverpool player and fans who were most keen to hear the half-time whistle as Atletico continued to dominate.

However, Liverpool was given a huge boost less than 10 minutes into the second half when Griezmann was shown a straight red card by Siebert for a high foot on Firmino.

Griezmann and Simeone were both sporting wry smiles as the former made his way off the pitch to a standing ovation from the home fans.

It certainly wouldn't have been the way he envisaged his night ending, but his two goals had at least given Atletico hope of coming away from this match with at least a point.

Simeone was performing his usual conductor's routine on the touchline, attempting to whip the home fans into a frenzy and help them put their team over the line.

After Trent Alexander-Arnold had launched a ball high into Atleti's box, Hermoso inexplicably made a beeline for Jota and shoved the forward to the ground.

The referee had no choice but to point to the spot and Salah coolly dispatched the penalty to give Liverpool the lead once again.

With the game entering the final 10 minutes, Atletico thought it had been given one final lifeline as Siebert pointed to the penalty spot.

Jota was initially adjudged to have brought Gimenez down, but the referee surprisingly overturned his original decision to the bemusement of most inside the stadium.

Liverpool was able to see out the win and Porto's 1-0 victory over AC Milan in Group B's other match means Jurgen Klopp's side now has a comfortable five-point cushion over Atleti at the top of the group.