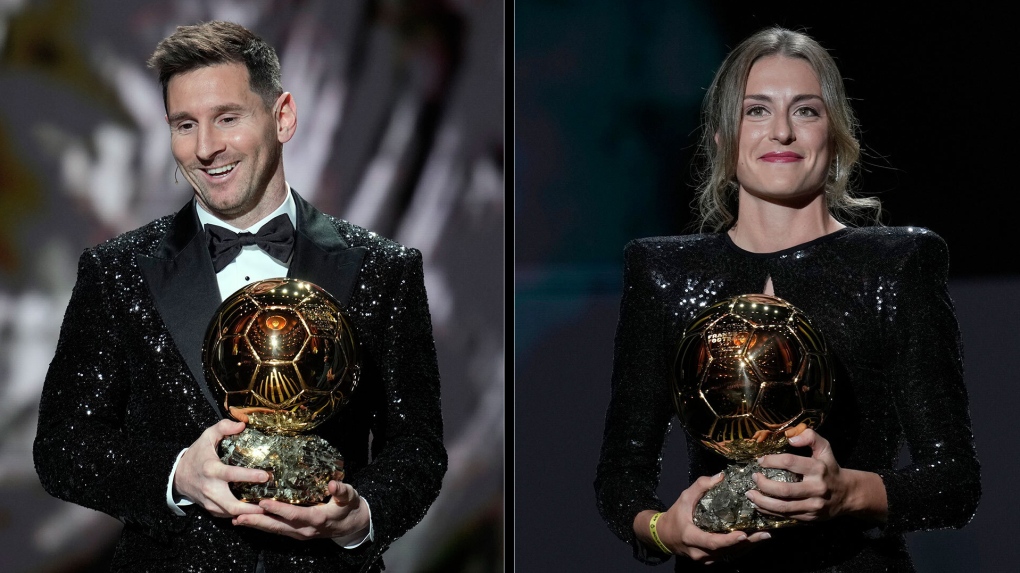 Lionel Messi won the men's Ballon d'Or for a record-extending seventh time on Monday, ending the year in style after a brilliant final season with Barcelona and earning his first major international trophy with Argentina.

Alexia Putellas became the third winner of the women's award for an outstanding season with Barcelona and Spain.

The 34-year-old Messi led Argentina to the Copa America title in July after losing in four major international finals.

“I'm very happy to be here, happy to keep fighting for new trophies,” he said through a translator. “I don't know how many years I have left, but I hope many more. I'd like to thank all my (former) teammates at Barcelona and Argentina.”

“I would like to say to Robert that it's an honor to be your rival, and everyone would say you deserved to win it last year,” Messi said.

Awarded by France Football magazine, the Ballon d'Or has been given out to men every year since 1956 when Stanley Matthews won.

Both 2020 awards were canceled because the coronavirus pandemic disrupted the season.

The 33-year-old Lewandowski set a new single-season scoring record for the Bundesliga with 41 goals - one more than late Germany great Gerd Muller - when he scored in the last minute of the last game.

Lewandowski netted in 19 consecutive games in all competitions for Bayern from February to September and he just missed out on equaling the record of scoring in 16 Bundesliga games in a row. Overall, he already has 25 goals in 20 games for Bayern this season.

His 11 goals in 12 games for Poland this year took his international tally to 74 in 128 games, just six less than Messi.

Chelsea and Italy midfielder Jorginho was third with 460 points after helping the London club win the Champions League and his nation win the European Championship. Real Madrid and France forward Karim Benzema was fourth on 239.

Putellas helped Barca win the treble and scored 26 goals in 42 games overall. The midfielder netted in the Champions League final against Chelsea, and in August she was named UEFA women's player of the year.

“I'm very emotional, it's a very special moment,” she said at the Paris ceremony through a translator. “I would like to start by thanking all my teammates, especially my current (Barcelona) teammates. For me it's a collective success.”

The only previous women's award winners are Norway striker Ada Hegerberg in 2018, and U.S. forward Megan Rapinoe in 2019.

Putellas tallied 186 points to finish far ahead of club and country teammate Jenni Hermoso on 84.

Chelsea and Australia striker Sam Kerr placed third in the voting after 21 goals in the English Women's Super League and six for Australia at the Tokyo Games. Kerr has maintained her excellent form with 13 goals in 12 games this season.

In his final season with the Spanish giant he netted 38 overall, winning his last trophy with a superb performance in the Copa del Rey final. At the Copa America, Messi was inspirational, finishing joint-top scorer with four goals and leading with five assists.

Then he stunned the soccer world by joining Paris Saint-Germain.

He has made a modest start with four goals in nine games. But he remains a constant threat, even when he's not in top form, as he showed on Sunday in a 3-1 win at Saint-Etienne where he set up all three goals.

In other awards, the Kopa Trophy for the best under 21 player went to 19-year-old Spain and Barcelona midfielder Pedri. He caught the eye at Euro 2020 and reached the Olympic final.

The Lev Yashin for best goalkeeper was won by Gianluigi Donnarumma, who helped Italy win the Euros.